"Christine Amsden unleashes her brilliant storytelling magic as the adventures of Cassie Scot escalate to the extreme. Rife with betrayal and a debt too deep for money to clear, Secrets and Lies plunges the reader into an utterly believable world where villains and heroes spring lifelike from the pages. Brace for a whirlwind ride of sorcery, romance and knife-edge peril. A truly original urban fantasy. Not to be missed!" –Kim Falconer, bestselling author of The Spell of Rosette, Quantum Enchantment Series. 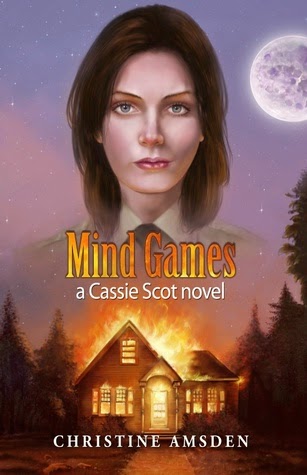 Evan broke Cassie’s heart two months ago, and she still doesn’t know why. She throws herself into family, friends and her new job at the sheriff’s department, but nothing helps. The only thing that finally allows her heal and move on is the love of a new man, mind mage Matthew Blair. Cassie finds him…irresistible.

Matthew may also be the only one who can help keep the non-magical residents of Eagle Rock from going crazy over the murder of a beloved pastor’s wife. It looks like a sorcerer is to blame, but while Cassie tries to figure out who, others take matters into their own hands. With tensions running so hot, a single spark might set Eagle Rock ablaze. Book 3 in the Cassie Scot series.

Rick was still on some tirade about the heat, possibly trying to blame an August heatwave on sorcery, or perhaps the wrath of God, when I got the oddest sense of foreboding. It was a tingle, one of those things that is easily dismissed in the moment but, in retrospect, makes you think, I had a feeling…

Upon entering the diner my impression of danger strengthened, though it took me a minute to pinpoint the source of the threat. I noticed two things at once: First, Mrs. Meyer’s oddly shifty gaze as she worked the cash register, and second, the nervous expression of the stooped, middle-aged man standing opposite her.

The tinkle of bells startled the man in front of the register more than it should have. He turned slightly, took a good look at Rick and me in our deputy’s uniforms, and let out a cry of alarm. The next thing I knew he held a pistol in his shaking hands. “Don’t move!”

I froze. In that microcosm of time between instants, I gathered that Rick and I had interrupted a robbery and the man probably thought someone had called the cops. There was a sense of desperation about the man that made him seem wild and unpredictable – a dangerous combination, especially for a man holding a deadly weapon.

When time resumed, everyone in the diner began to panic. More than a few people screamed. Dishes fell and broke. Everyone scrambled for cover, most sheltering under tables.

In the midst of the chaos, the man’s shaking hand jerked upward and fired a shot into the ceiling, showering plaster and debris all !over a quaking Mrs. Meyer.

“I said don’t move!” He brought the gun back down and aimed it at me. “Drop your weapon.”

With painstaking slowness, I moved my fingers toward my sidearm. To my right and just behind me Rick stood stock still, not going for his weapon at all.

“Don’t try anything!” the gunman warned. He waved the gun at Rick. “Drop your weapon, I said!”

“It’s okay,” I tried to make my voice sound soothing. “You don’t want to hurt anyone. If you put the gun down, we can work something out.”

My gun was halfway to the floor when Rick suddenly withdrew his weapon and aimed it at the gunman, pairing the two of them off in a good old-fashioned Mexican standoff. “Drop your weapon!” Rick shouted.

For a second, I truly believed I would die. The gunman looked crazy and desperate enough to start shooting at a moment’s provocation. I even thought I saw his finger tighten around the trigger.

The gunman opened his mouth as if to speak, but then something rather odd happened. The only physical signs were his eyes, which took on a sudden vacant expression, and his fingers, which went limp. His gun clattered to the floor.

Not sure what had just happened, but not about to let the opportunity pass me by, I rushed up to the man, kicked the gun away, and twisted his hands behind his back. He didn’t even resist as I forced him to the ground, slapped cuffs on him, and patted him down in search of other weapons.

Rick came up beside me. “You shouldn’t have lowered your weapon. I had it under control.”

I doubted it. I wasn’t sure what had happened, but Rick’s move might have gotten me killed. It wasn’t the right time to discuss it, though, so with one knee on the gunman’s back to make sure he didn’t move, I radioed the station for backup. After that, I scanned the crowd for signs of injury. Everyone seemed fine, if rattled, but one face in a nearby booth caught my attention.

Matthew Blair, state senator, son of the mayor, and powerful mind mage, winked at me. Casually, he unfolded his wallet, slid a couple of bills onto the table, and walked outside. But he left me in no doubt that he had used his talents on the gunman to force him into docility.

On a positive note, Rick left the department that afternoon. I’m not clear if he quit or if the sheriff fired him, but he decided to head up private security for his church. I couldn’t feel too surprised when I’d never had a partner last much longer than a month anyway. 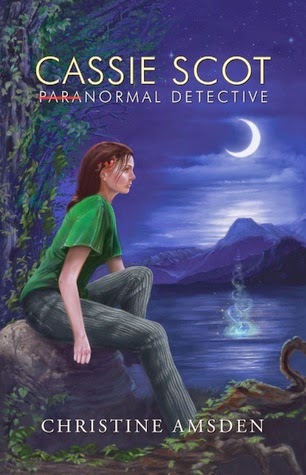 BLURB from Goodreads
Cassie Scot is the ungifted daughter of powerful sorcerers, born between worlds but belonging to neither. At 21, all she wants is to find a place for herself, but earning a living as a private investigator in the shadow of her family’s reputation isn’t easy. When she is pulled into a paranormal investigation, and tempted by a powerful and handsome sorcerer, she will have to decide where she truly belongs. 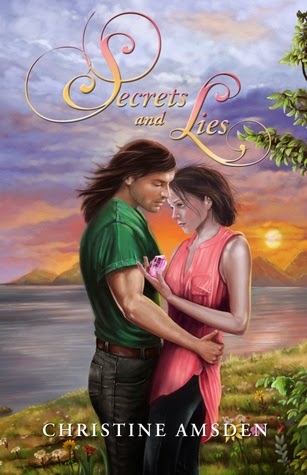 BLURB from Goodreads
Cassie Scot, still stinging from her parents' betrayal, wants out of the magical world. But it isn't letting her go. Her family is falling apart and despite everything, it looks like she may be the only one who can save them.To complicate matters, Cassie owes Evan her life, making it difficult for her to deny him anything he really wants. And he wants her. Sparks fly when they team up to find two girls missing from summer camp, but long-buried secrets may ruin their hopes for happiness. Book 2 in the Cassie Scot Mystery series.

Christine Amsden has been writing fantasy and science fiction for as long as she can remember. She loves to write and it is her dream that others will be inspired by this love and by her stories. Speculative fiction is fun, magical, and imaginative but great speculative fiction is about real people defining themselves through extraordinary situations. Christine writes primarily about people and relationships, and it is in this way that she strives to make science fiction and fantasy meaningful for everyone.

At the age of 16, Christine was diagnosed with Stargardt’s Disease, a condition that effects the retina and causes a loss of central vision. She is now legally blind, but has not let this slow her down or get in the way of her dreams.

In addition to writing, Christine teaches workshops on writing at Savvy Authors. She also does some freelance editing work.

Christine currently lives in the Kansas City area with her husband, Austin, who has been her biggest fan and the key to her success. They have two beautiful children.
Website
Newsletter
Blog
Facebook
Twitter
Google+
Goodreads