BLOG TOUR - LAMB TO THE SLAUGHTER BY KAREN ANN HOPKINS 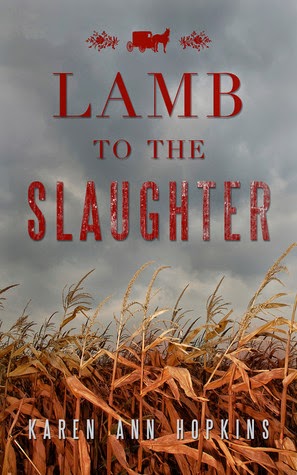 BLURB from Goodreads
Lamb to the Slaughter is a story about the intertwining lives of three unlikely people in an Indiana Amish Community and the devastating results when a rebellious teenage girl is found shot to death in a corn field during the harvest. Serenity Adams is the newly elected young sheriff in the country town of Blood Rock and besides dealing with the threatening behavior of her predecessor, she now has a dead Amish girl on her plate. At first glance, the case seems obvious. The poor girl was probably accidentally shot during hunting season, but when the elders of the Amish community and even the girl’s parents react with uncaring subdued behavior, Serenity becomes suspicious. As she delves deeper into the secretive community that she grew up beside, she discovers a gruesome crime from the past that may very well be related to the Amish girl’s shooting. Serenity enlists the help of the handsome bad-boy building contractor, Daniel Bachman, who left the Amish when he was nineteen and has his own dark reasons to help the spunky sheriff solve the crime that the family and friends who shunned him are trying desperately to cover up. Serenity’s persistence leads her to a stunning discovery that not only threatens to destroy her blossoming romance with Daniel, but may even take her life in the end. 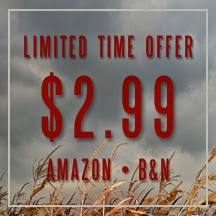 INITIAL THOUGHTS
Looking forward to this one with mixed feelings, trepidation and a little anxiety, as I truly loved the Temptation Series, will I love this too?"

MY REVIEW
I received a  ARC of this one from the Author via Kismet Book Tours in exchange for my honest opinion and review.
The cover shows a pretty bleak sky over a large cornfield, which is an important place within the book as that is where Naomi Beiler's body is found. I love the Amish buggy on the cover too as well as the plainer, perhaps Amish like font.
So now to the actual plot, Serenity is the new Sheriff of the small rural town she grew up in, though the old Sheriff Tony Manning still seem's to think he is ruling the roost!
There is a large Amish community which also comes under Sheriff Serenity's jurisdiction so when an Amish girl is found dead in a corn field, she has to investigate. She learn's that the Amish prefer to "take care of their own" and Tony Manning takes great delight in goading her that she will never find out how the Amish girl was shot. After taking with her Deputy and the coroner about how to approach the Amish she visits Daniel Bachman, a man who was brought up the Amish way but left to "go English". Daniel agrees to help Serenity but only if she does things "his way" which means them pretending to be in a relationship and using the pretense that Daniel may he considering going back to being Amish. So alongside of the girls death plot we also have a fledgling romance too. I really enjoyed how the two plot lines ran along side each other. Finding out what happened to Naomi becomes even more personal when she finds out someone close to her is kind of involved (but I refuse to say who as that would be a large spoiler!).
The story is told from three points of view, you have Serenity in the "now" after the body has been found. Then there is what happened leading up to the death told by Naomi's point of view. Also towards the end of the book we have some of the story told my Daniel Bachman and his point of view.
I really enjoyed the mystery, suspense and drama in this book as well as it indulging me a little more in my fascination with the Amish culture. Karen Ann Hopkin's writes so well and the just flows brilliantly, I really enjoyed it. So much so as I was reaching the end I didn't want it to be over. I really hope that this book is just the beginning of a series. We can see Serenity and Daniels relationship develop as well as seeing Serenity solve other cases. There is a hint towards that at the end of this book.
So did I enjoy the book? Definitely Yes!  Would I recommend the book? Again, definitely yes! Would you read another book in this series if there is one?  I certainly would and I do hope we are going to have more of Serenity, Daniel, Todd, Bobby and the Amish. Would you read other titles by Karen Ann Hopkins? I would certainly take a close look at anything written by this author, I love her writing style and plots.

MY FINAL THOUGHTS
Please tell me this is the start of a new brilliant series!! I want more please!

ENA'S REVIEW
I also received a copy of this book via Kismet in exchange for my honest opinion & review.
So what can I say about the book, I did initially dislike how the book jumped from the "now" with Serenity to the "past" with Naomi but once you get into the book it soon falls into a rhythm and I ended up not wanting to put it down. I soon became attached to the characters and what was happening to each of them. I enjoyed Karen Ann Hopkins way of writing and also I enjoy learning about the Amish culture, it is a fascinating culture.
The investigation begins by being one that seems to only concern the Amish but then there's a turn and it seems the death effects certain "plain people", some of which are quite close to the Sheriff herself. The book has drama, love, a strange culture, as well as mystery, suspense and a death. So I'd say there is something within the book for most readers.
My only disappointment was the ending, I really, really wanted it to say there was going to be a Bk2. How the book ends leaves a bit of a cliff hanger which could be the subject of the next book.
So did I enjoy the book? Yes!  Would I recommend the book? Yes, I think it will appeal to a wide ranging audience. Would you read another book in this series if there is one?  I would, I really hope this is just the beginning of a great series. Would you read other titles by Karen Ann Hopkins? I have read her Temptation Series and would look at anything else she writes too.


It's a really exciting prize package for this tour, so make sure to follow along for more chances to win every day! What’s up for grabs:
• A $100 Amazon Gift Card
• An autographed set of Karen’s YA Temptation series
• A traditional Amish style hand stitched wall hanging/lap quilt with the lone star pattern in country colors 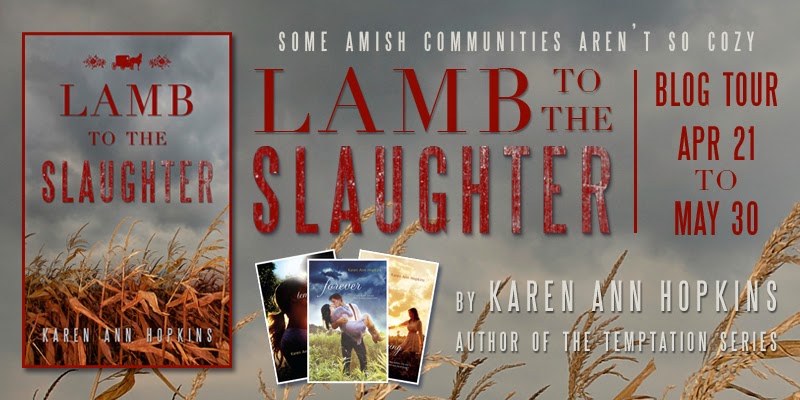