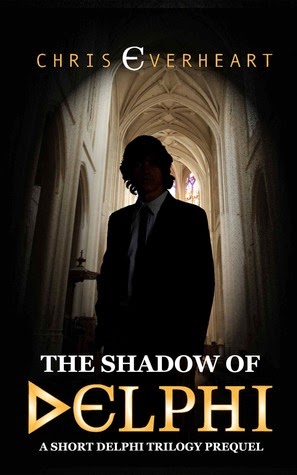 BLURB from Goodreads
A short prequel to the gripping Delphi Trilogy. Find out what drove Zach to return to his wealthy hometown against ever grave warning.Was the dead boy in the boarding school chapel really who he claimed to be? Are the headmaster’s ominous words meant to reassure the rest of the boys—or warn them? Why is Mom making one of her secret visits now? Answers are scarce for Zach, a boy who was taken away from home nine years ago and hidden away, forbidden to ever return home or reveal his true identity. But the questions are driving him to make a fateful decision that will change his life for the darker. 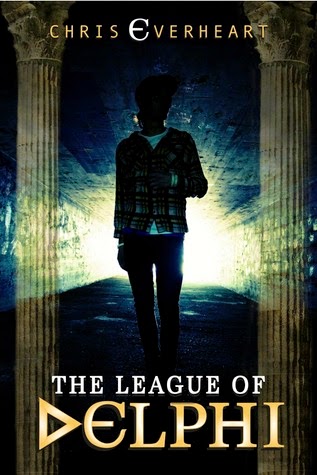 BLURB from Goodreads
History’s darkest secrets hide in plain sight. One of the freshest new voices in the world of young adult suspense, Chris Everheart confirms that he’s here to stay with this fast-paced, ingeniously plotted, unputdownable thriller.
A lone teen, a suspicious death, an ancient conspiracy. The first book of the gripping new Delphi series, The League of Delphi draws you in, takes you on a tense and thrilling ride, and leaves you wanting more. Ten years after his father's mysterious death, 17-year-old Zach secretly returns to his wealthy hometown in search of answers. Why did his mother move him away then go into hiding to die alone? Why did she change his name, forbidding him to ever reveal his true identity? Why was he never allowed to return home?Left with nothing and no one, Zach is desperate to reconnect with this seemingly “perfect” town. But something isn’t right. When a local teen commits suicide and no one seems to care, Zach’s hopes collapse into disenchantment and suspicion. Ashley, a local teenager on the fringe, piques his interest with whispers of a secret committee controlling the lives of everyone around them. Could it be true? Together, Zach and Ashley delve into the hidden life of the town and discover a dark connection to Ancient Greece and the Oracle at Delphi. Their suspicions are confirmed - but the conspiracy is more terrifying and dangerous than they ever imagined...... 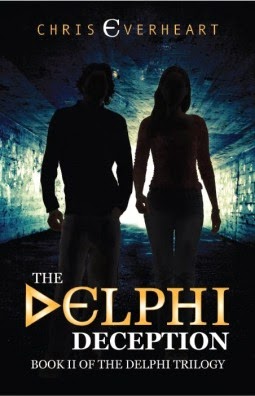 BLURB from Goodreads
After ten years in hiding 17-year-old Zach made the mistake of returning to his wealthy hometown. He slammed head-on into the conspiracy that killed his parents, drove a childhood friend to suicide, and exploits other teens to fulfill an ancient agenda of greed. Zach should have run. But he stayed, and now the consequences are burying him.His blind pursuit of the town’s deepest secrets has left him injured and terrified. The answers he’s gotten about his true identity are more disturbing than he could have imagined. And his first love, Ashley, is in more danger than ever.Desperate to save Ashley, Zach is deterred by the mysterious man he thought was his ally. Forced to team with Ashley’s ambitious sister who’s willing to help—for a price—he enters an alliance fraught with deception and betrayal.As the League of Delphi’s vicious new security chief closes in on him, Zach is propelled back into the jaws of danger by a cryptic command from beyond this world. Will his misguided mission save Ashley? Or will it get them both killed? 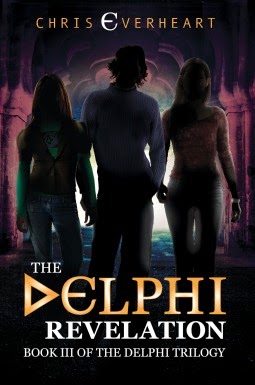 BLURB from Goodreads
A defiant teen. A deadly confrontation. A stunning revelation. The spellbinding Delphi Trilogy hurtles to a gripping conclusion with a thriller that keeps you enthralled to the end. 17-year-old Zach secretly returned to his wealthy hometown after ten years in hiding only to plunge into a grim reality and discover the true reasons his mother took him away and changed his identity: a secret Committee that controls the lives of everyone in town and the global League of Delphi with an ancient agenda of greed and teen exploitation. In search of his family's true past, Zach makes unexpected connections with other desperate souls. Ashley, his first love, is ensnared in the League's deadly conspiracy. Larry, the town's vengeful outcast, has turned out to be closer to Zach than he could have imagined. But trust comes with a price. Zach finds himself trapped and tortured by the League's vicious security chief. He can stop the pain by accepting their twisted way of life. But the wrong decision will endanger thousands of lives-and drive those closest to him to disaster and death. 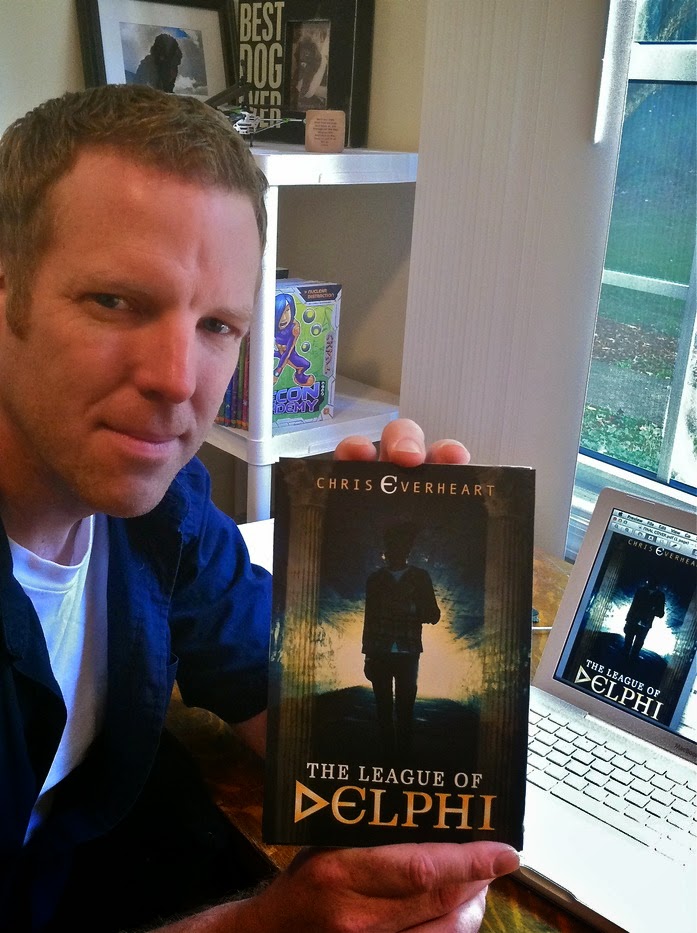 I'm living proof that harnessing talents like staring out the window and watching TV can be put to use for the good (or at least the entertainment) of humankind.
Fifty percent of my childhood was spent staring out a classroom window, wondering what was going on "out there." I daydreamed about interesting places, fascinating people and exciting adventures.
As a reluctant and struggling young reader, my hunger for stories was fed mostly by TV and movies. I still haven't read all the classics (I promise I will eventually). PRIDE AND PREJUDICE wasn't on my reading list as a kid. But I distinctly remember going to the drive-in movies with my dad and little brother and seeing SMOKEY AND THE BANDIT for the first time! I wanted to LIVE in a world where a Trans Am really could jump a creek from a collapsed bridge and keep tooling down a dirt road away from the county mounties.
In high school, though, I was lucky enough to be inspired by a dedicated teacher to read and connect to the arts and humanities. It opened up a world that I might otherwise never have known. I went on to study art and anthropology/archaeology in New Mexico and Minnesota and traveled throughout the lower-48, Western Canada and Alaska. My jobs have included: archaeological illustrator; art gallery manager; motion picture/TV/indy film crew, writer, director and actor; waiter; maitre d; pool boy; slime line worker (people who've worked in an Alaskan fishery know what this is).
While working at an ad agency, I started writing my first book - a political thriller - because I needed to express my passion for stories but couldn't afford to go to film school. It stuck. I found that story is always lurking just below the surface of my conscious mind, so writing fiction comes very naturally to me. I got a contract to write action/adventure books for young readers and found it so easy and fun to write to my 12-year-old self (ref: "reluctant and struggling reader" above).
So I write for young readers and grown ups alike - short stories, novels, chapter books, graphic novels. I still love daydreaming about interesting places, fascinating people and exciting adventures. But window gazing has gotten even better - because today I get to share my daydreams with you. Enjoy!

I sometimes explain myself like this: "I'm living proof that harnessing talents like staring out the window and watching TV can be put to use for the good (or at least the entertainment) of humankind.” I spent most of my childhood staring out the window of classrooms and wondering what was going on “out there”. When I was 12 years old, I wouldn’t have been caught dead with a book in my hand. So how does a childhood reluctant reader like me end up writing books?

Short answer: I'm as surprised as you are!

Long answer: Even though reading was frustrating for me (sometimes still is), I connected deeply with stories through TV and movies. (If I had thought of it early enough in my life, I would have gone to film school - maximum reading requirement: a 90-page screenplay!) Through art, humanities, film, and television I absorbed enough story over the years to finally feel the need to just spit it out. That’s when I started writing. Throw a couple of dedicated teachers in there for influence and here I am, an award–winning author of more than twenty books for young readers! Unbelievable.

I used to be embarrassed about my reading and learning problems. They didn’t call us “Nontraditional Learners” in my day; we were “slow” or “lazy”, suspended in a motivate-or-abandon culture. That’s not to say there weren’t dedicated teachers who made a difference - there certainly were. But there was little understanding or resources for the struggling student. What’s often missed is the huge impact reading difficulties have on self-esteem. It’s really hard to see other kids “getting it” or picking up and enjoying books and not understand why you don’t.

In the last few years I’ve connected with other “dummies” like me and realized how many kids (and adults) out there have the same struggles. This problem suddenly looks more and more like an asset as I’ve become willing to talk about it openly. These days a lot of parents, teachers, and librarians ask me for advice helping their reluctant readers so I formulated the R.E.A.D.E.R. tips. In short, they are:

As an author I write like how a reluctant reader thinks – because I have no other option: lots of action; short, cliffhanger chapters; sometimes cliffhanger book endings; accessible vocabulary. There’s nothing more satisfying to me than to hear a kid – or their parent, teacher, or librarian – say they read the whole thing, fast, and couldn’t put it down. It makes my heart soar, because I know that finishing, comprehending and loving a book is a huge accomplishment to a struggling reader and something to celebrate!

The amazing conclusion from my life's experience, though, is that childhood reluctance to read doesn't spell doom for a person’s future - even in the language arts! We want to learn. Don’t give up on us.

Read more at my Reading Rabble blog where we focus on “Inciting excitement for books”.
Posted by Jeanz xx at 03:00