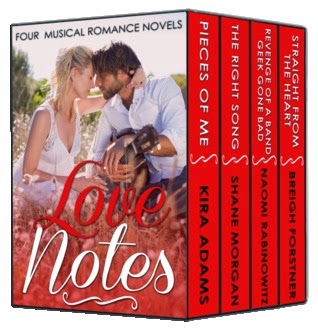 
This is the first book in the Straight from the Heart series and The final novel in the Love Notes box set is . .   Follow Cale and Bryn as she goes on her first tour, and discovers there's so much more to her than she ever realized. This is a story about a girl discovering and experiencing life for the first time.

Straight From The Heart by Breigh Forstner 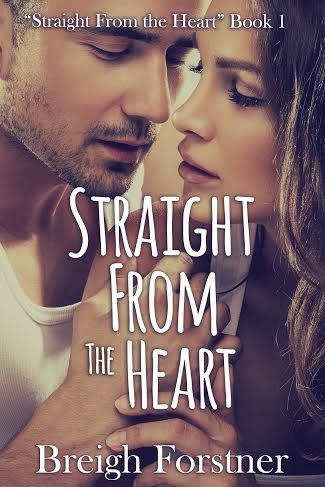 BLURB supplied by Itching For Books
Bryn Schaefler grew up rich. Her parents expected the best out of her, picked her boyfriend for her, and groomed her to be the next trophy wife fresh out of High School. But when they discover she wants to pursue music instead of following in her mothers footsteps, they wanted to hear nothing about it.

That was when Bryn left for good.

By chance, she auditioned for main stream rock band Everlasting. Never in a million years did she think she would make it.

Cale Pelton knew it was his fault for the band scrambling around to find a new guitarist. Once he saw Bryn audition, he knew he had to have her. Not just in the band, but in his mind, body and soul.

STRAIGHT FROM THE HEART
MUSIC PLAYLIST
BY Breigh Forstner

Music played a huge part in creating this story about Bryn following her dreams and doing what she loved. I’ve included here some of the music I listened to while writing “Straight from the Heart,” that also helped shaped the characters to be who they are! Note, these songs are in order of the chapters as they were used for chapter titles in the book.

Second Chance by Shinedown: I had this song pictured in my mind the whole time writing the opening scene to the book. This was when Bryn walked out the door of her parents’ house and into her future. It’s a very emotional song and I tried to capture that same kind of emotion with Bryn as she was doing something she hasn’t thought about doing before.

Demons by Imagine Dragons: This was the song Bryn played for her audition for Everlasting.

Don’t Stop Believing by Journey: I thought of this as an inspirational song. This was when Bryn got the call from Cale that she made the band, and had met with him for lunch.

Nothing But A Good Time by Poison: The perfect pick me up song for Bryn’s first day on the tour.

King for a Day by Pierce the Veil featuring Kellan Quinn: Bryn’s first experience on stage. (I should’ve changed the title to ‘Queen’ for a day

One Thing by One Direction: Such a sweet song. I had to add it into the book regardless if it fit or not.

Lips of an Angel by Hinder: Bryn had agreed to go on a date with Damon Charming, lead singer of Ignite the Flames.

Face Down by the Red Jumpsuit Apparatus: Bryn catches Cale in a compromising position.

I Hate Everything About You by Three Days Grace: Bryn was still mad at Cale for doing what he did at the club. I thought this song was fitting for her emotions at the time.

Congratulations by Sleeping with Sirens featuring Matty Mullins: Bryn was reunited with her best friends in California, Gina and Bethany!

Addicted by Saving Abel: I added this song in, thinking immediately of the instant chemistry Bryn and Cale had from the very beginning. They had feelings for each other, and soon became addicted.

She Will Be Loved by Maroon 5: Bryn and the group was finally back from tour and she was glad to be back to her temporary home.

Love Like War by All Time Low featuring Vic Fuentes: This was when Bryn and the group went into the studio to record their album, with Tyler, for the first time.

Tears Don’t Fall by Bullet for my Valentine: Bryn had just found out about what happened between Cale and Tyler Donahue, a former member of the band, before she joined the group.

Run Free by Asking Alexandria: I really connected to the lyrics when writing this chapter. The chorus says “Open your eyes and your mind to a new world,” and I found that perfectly fitting for Bryn.

No Ordinary Love by Memphis May Fire: The title of this song describes Bryn and Cale’s relationship perfectly. This is no ordinary love.

The Final Episode by Asking Alexandria: Everlasting had just gotten to the festival they were going to be playing at, and Bryn had a feeling something was going to wrong.

Outside by Staind: This was the beginning of the end. Of the book that was. While Bryn and Vince were onstage something traumatic happened offstage, affecting each of the members of Everlasting, especially Bryn.

***GIVEAWAY***
Sorry it's US ONLY!
a Rafflecopter giveaway


REST OF THE BOX SET


This novel is a coming of age romance that involves realistic situations and raw emotions . . . . .
Pieces of Me by Kira Adams 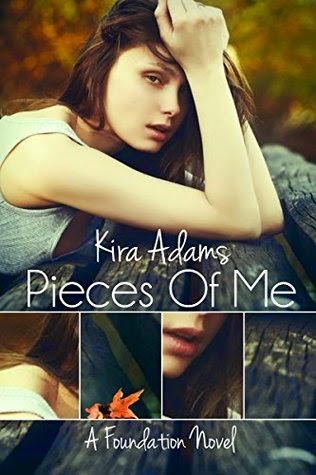 BLURB supplied by Itching For Books
For sixteen year old Peyton Lane, life has never been easy. She's not popular, overweight, and oh yeah, her sister is embarrassed of her. But over the course of a tumultuous year, everything changes for Peyton. Suddenly all eyes are on her and it's not because she's fat. From a pair of handsome twins to a couple of dangerously sexy rockers, Peyton will have to find out who she can trust with her heart. From the ups and downs to the twists and turns -- this is Peyton's story of finding one's voice and growing into your own.

The Right Song by Shane Morgan 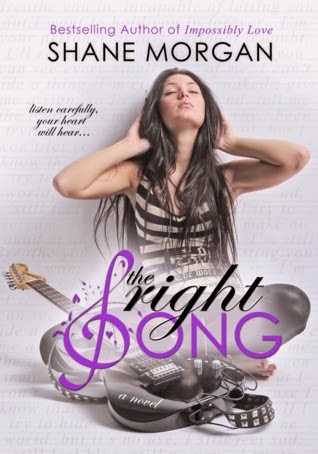 BLURB supplied by Itching For Books
Pain never truly goes away, until you find something deeper and meaningful that cures the heart and fills it with love.
That is what Aurora desperately wants to believe. That somehow her music can save her, or even touch the unreachable heart of the guy she has liked for years.
Rora yearns for his attention and wants to experience this so-called love that could possibly end her long suffering and inspire her to chase after her dreams.
In deeply understanding the feelings of others and herself, will Aurora give up on ever finding true happiness, or will an intriguing soul teach her about the greatest song ever written?
Connect with Shane Morgan

Revenge Of A Band Geek Gone Bad
by Naomi Rabinowitz 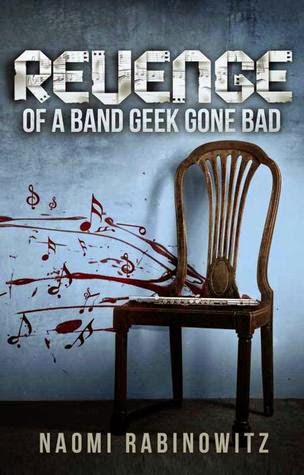 BLURB supplied by Itching For Books
Shy, overweight Melinda Rhodes' sophomore year of high school isn't going so well. Her own mother mocks her weight. Her pants split in the middle of school, earning her the nickname, "Moolinda." She then loses first chair flute in band to Kathy Meadows, her pretty and popular nemesis.

Her luck changes when she catches the eye of Josh Kowalski, a rebellious trumpet prodigy and class clown. Josh has also been hurt by Kathy and asks Melinda to help take Kathy down. Mel figures that she has nothing to lose ... and Josh is adorable with gorgeous blue eyes and a winning smile. She agrees to team up with him and looks forward to finally getting back at her rival.

At first, the pair's pranks are silly, and as they work together, Mel comes out of her shell. Even better, she finds herself falling for Josh and it appears as if he might feel the same way about her.

However, their schemes become more and more dangerous and Mel is surprised to discover her dark side. Just how far will she go to get what she wants -- and is Josh really worth the risk?