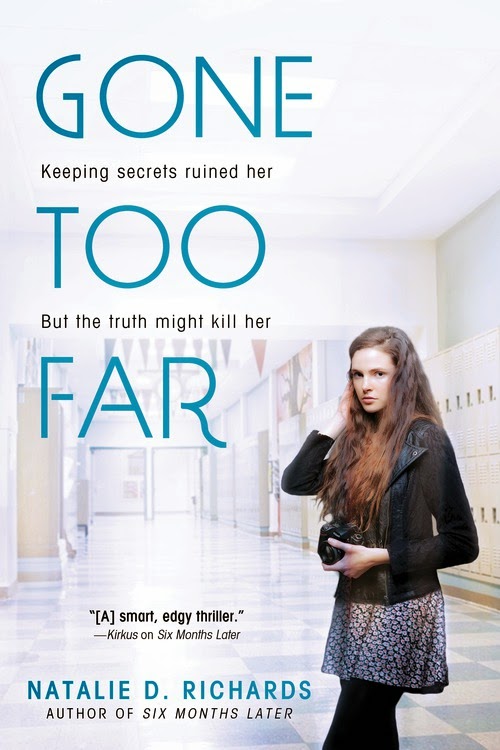 BLURB from Goodreads
Keeping secrets ruined her life. But the truth might just kill her.Piper Woods can't wait for the purgatory of senior year to end. She skirts the fringes of high school like a pro until the morning she finds a notebook with mutilated photographs and a list of student sins. She's sure the book is too gruesome to be true, until pretty, popular Stella dies after a sex-tape goes viral. Everyone's sure it's suicide, but Piper remembers Stella's name from the book and begins to suspect something much worse.Drowning in secrets she doesn't want to keep, Piper's fears are confirmed when she receives an anonymous text message daring her to make things right. All she needs to do is choose a name, the name of someone who deserves to be punished...

What is the name of your latest book, and if you had to summarize it in less than 20 words what would you say?
Gone Too Far is my newest book and it’s due out January 6th!  Woohoo!  For my twenty word summary, I’m going to go a little cryptic with…
A photographer who sees too much.
A mysterious invitation to make someone pay.
A vigilante game with an unimaginable cost.

How long does it usually take you to write a book, from the original idea to finishing writing it?
Great question, but sadly there’s not a consistent answer!  Six Months Later took roughly six months to write and another month or two to edit.  Gone Too Far also took about six months to write…the first time.  LOL!  This book required a tremendous amount of work.  Everything is very tightly woven, so it needed a lot of editing passes and very careful evaluation.  It was rough, but worth it!

How long have you been writing? Who or what inspired you to write?
I’ve been writing seriously for about eight years now, but my first book was purchased about two years ago.  I always thought it would be amazing to write books—even as a child, I dreamed of being an author, but then real life convinced me that I needed a more logical, dependable career.  When my mom passed away several years ago, I started to really think about how precious time is and how vital it is to reach for the things we want most.  It took a few years, but I think that was the incident that started my writing journey, so to speak.

Where do you get your book plot ideas from? What/Who is your inspiration?
My book ideas usually come in flashes.  Sometimes I’ll have a dream that will inspire me.  Often I’ll have a scene flash into my head, almost like a movie.  I call them my inspiration scenes.  This is what happened for Gone Too Far—I saw a scene of Piper getting the text message “Send me a name.  Make someone pay.”  After those scenes happen, my brain starts asking a lot of questions and a story comes together.

How do you come up with the Title and Cover Designs for your book/books? Who designed the Cover of your books?
I can’t take credit for the titles or covers of Gone Too Far or Six Months Later!  LOL!  My original titles were both changed for those books, which is fine by me. My amazing editing and promotional team at Sourcebooks Fire is terrific with finding title ideas that work.  It’s definitely a collaborative effort, but they have the best suggestions.  ;-)  The art team at Sourcebooks handles my covers and I couldn’t be more pleased with what they come up with!  As authors we submit some cover concept information—images or colors or what-not that we’d like to see on the cover, and definitely these elements were included on the cover for Gone Too Far.  I couldn’t be happier with how it turned out!

Do you choose a title first, or write the book then choose the title?
Almost always, I write the book and somewhere along the way the title is decided. But bear in mind, titles are not my strong suit, so usually they change!

How do you come up with characters names and place names in your books?
Gone Too Far and Six Months Later are both set in fictional towns, but all street names, restaurants, etc. are loosely based on places I’ve lived or visited.  As for character names, I am a huge fan of “feeling” character names out.  I keep saying different ideas out loud until things feel right.  It’s a lot like naming babies or pets!

Do you decide on character traits (i.e. shy, quiet, tomboy girl) before writing the whole book or as you go along?
Some things I know right away, but some things come to me as I write.  For example, I knew pretty soon that Piper was a photographer, but her family is very earth-friendly and socially conscious, which I didn’t know until I got to know her through writing.

Do you basic plot/plan for your book, before you actually begin writing it out? Or do you let the writing flow and see where it takes the story?
A lot of people refer to themselves as plotters (big time planners) or pantsters (fly by the seat of your pants writers), but I like to call myself a planster.  ;-)  I do have a very, very basic plan, which mostly means I know where I’m ending up when I start a book to some extent.  But most of it is flying into the mist letting the book go where it needs to go.

Do you have a favorite character from your books?  Why are they your favorite?
Tate is probably my favorite character of all time.  He’s a secondary character in Gone Too Far and I’d love to explore him more.  He’s sort of damaged and confused and there’s just a lot going on that I’d like to understand better.

If you had to choose to be one of your characters in your book/books which would you be? And why?
Piper, because she’s strong and generally calm (which I’m not!) and she’s a really talented photographer, which is kind of amazing to me.

What can we expect from you in the future?  I.e. More books of the same genre? Books of a different genre?
I have two more teen thrillers coming out with Sourcebooks, though I don’t have titles or release dates yet, but I’ve got other projects I’m working on as well, some YA, some middle grade, and some adult stuff.

Are there any New Authors you are interested in for us to watch out for? Why should we watch out for them?
I’d keep your eyes peeled for Pintip Dunn who has Fit to Die coming out in fall of 2015 and The Hotline in 2016.  Also, Meg Kassel who’s coming out early 2016 with The Black Bird of the Gallows.  I’ve read bits of these books and just adored them.  Plus, the authors are lovely.


Thanks so much for having me!  It was lovely to be here!!