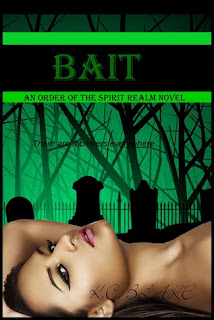 
The knowledge she was no longer alone in bed should have scared the crap out of Bay-Lee and normally it would have, but she was still floating on the fragments of a blissful dream.  The soft whisper of a lover’s hands surfaced with her consciousness.  She’d been dreaming about being in love, the kind that inspired people to die for each other, the Romeo and Juliet sort of love.  Beyond that nothing seemed real to her.
An odd smell pierced the veil of sleep, and she wrinkled her nose.  Jack Daniels?
The next thing to grab her attention was the feel of a hard body crowding her on the narrow mattress.
Warm breath lightly blew a trail down her face from forehead to mouth like the soft wings of a butterfly brushing against her skin.  Fingers slid up one arm to curve around her shoulder.  Her eyelids fluttered, and she smiled up at the gorgeous stranger.  Fantasy wove a complicated tapestry with reality, and she decided she was still dreaming.
The dark-haired boy’s gaze settled on her lips.  She could practically read his mind.  He wanted to kiss her until neither of them could breathe.  Still living on the leftover residue of an imagined love, she was going to allow it.  A tingling sense of anticipation had her nearly breathless already.
She closed her eyes again, mentally preparing for the kiss.
She waited.
The bed creaked as he leaned in to give her what she desired most.  His hot breath teased her lips, and the smell of whiskey intoxicated her.  She clenched her hands into tight fists, grabbing and holding bunched up bedding, silently willing him to hurry before she came to her senses.  Outside of this moment nothing existed, not school, not her boyfriend, not the troubling circumstances that forced her to constantly move from state to state, nothing.
When her lips remained cool and untouched, she opened her eyes to find the boy staring down at her with pure contempt.  A menacing light emanated from his eyes.  He parted his lips on a soft growl, reminding her of a werewolf, and her blood turned to ice.
“You ruined my life,” he whispered in a semi-harsh tone, accusing.
Wide awake now, facts hit her like an avalanche.  A stranger was in her bed, her gun was in the dresser, and he was big enough to overpower her.   Feeling vulnerable made her sick to her stomach.  It also filled her with unquenchable anger.  How dare this stupid boy invade her bedroom, her bed, and threaten her!
Speaking in a firm tone without the slightest quiver, she asked, “How did you get in here?”  He rolled off the mattress, no hurry, while she pulled the sheet higher to hide the bunny pajamas.  They were ridiculous, sky blue with fluffy scampering white rabbits.  Knowing her hair was a mess, she automatically reached up to smooth it down.  At the last second she stayed her hand.  Why should she care if he thought she was pretty?  “Did Connor let you in?”
Her uncle wasn’t known for having the greatest judgment in the world.
The intruder grinned and took a two steps back until beams of moonlight exposed the left side of his body.  Tall and muscular, the guy was built better than any of the boys at school.  If she had to guess, she would say he was between eighteen and twenty-two.  Utterly masculine, he also had a lot of features girls would be envious of, long lashes, thick hair, and beautiful eyes.  They were the most amazing shade of green, like a place deep in the forest after a violent thunderstorm.
He grinned as if hearing her thoughts.  “I thought it was every teen girl’s secret fantasy to have me in her bedroom.  Was I wrong?”
It was then she recognized him, Tyler Beck, lead singer for the notorious band Bad-Rock.  There was a celebrity in her bedroom.  Gulp!  For a moment she forgot to breathe.  How was it even possible?  Why would a rock star come to her home in the middle of the night?  She had to be dreaming.
He picked the CD collection off the edge of the white wicker dresser and carelessly leafed through them, lips twisted in disgust.  A few of the CDs wound up on the floor.
She blinked.  “Am I... dreaming?”
. . . . . . . . . . . . . . . for the rest of this excerpt pop over to Rai29BookReadNReview tomorrow as that is where it will be posted!
Posted by Jeanz xx at 11:00