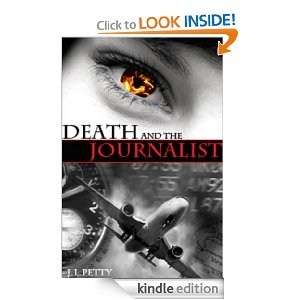 BLURB from Amazon.co.uk
After a mysterious malfunction crashes flight 102, Michael, the only survivor, is trapped in a deadly showdown with a supernatural force ... that wants to collect his soul.

When did you first consider yourself as a "writer"?
I considered myself a writer, when I started writing for The Virginian Pilot.

Did it take a long time to get your first book published?
It took 2 long years.lol

What is the name of your latest book, and if you had to summarise it in less than 20 words what would you say?
Death and the Journalist. This book is a horrifying thriller about a journalist that comes face to face with death.

Who is your publisher? or do you self publish?
Solstice Publishing

Do you have a "lucky charm" or "lucky routine" you follow when waiting for your book to be accepted by a publisher?
I always pray over my work before submitting it.

How long does it usually take you to write a book, from the original idea to finishing writing it?
It takes about 6 months.

Which of your books were easier/harder to write than the others?
Death and the Journalist was alot easier to write than other books I've written because I was really in love with the idea. So.. creatively speaking... I was able to let my thoughts flow really easy.

What can we expect from you in the future? ie More books of the same genre? Books of a different genre?
I just published a short story called ” The Glass Eye.” It is featured in Fear: A Modern Anthology for Horror and Terror. It was a charity anthology that was written in two volumes. International Best Selling authors Peter James and Sherri Browning Erwin wrote the forewords. I want to stick to the Horror genre.

Do you have plans for a new book? Is this book part of a series?
I would like to do a series for Death and the Journalist.

What genre would you place your books into?
Horror

The flight attendant faced the passengers. Over the roar of the engine, she spoke in a firm voice with a hint of quiver, “We are going to be okay, please put your oxygen masks on,” then she sat down and buckled her seat belt. The fat man and I were still standing. Grimacing at my cramping hands, I kept my grip on the black metal bar.


In the midst of the now-panicked passengers sat one woman, calmly flipping the pages of her Cosmopolitan magazine and taking occasional sips of her Pepsi. She seemed so calm and serene; I couldn’t take my eyes off her. She had long black hair and her face was like that of a fashion model or actress. She was wearing a black dress and needed no jewelry to define her long ivory-colored neck. This woman had the whitest skin. Her limbs were long. She seemed to ignore everything around her and was patiently waiting for the plane to crash.
As though she felt me staring at her, she turned to look at me. Gooseflesh popped up all over my skin when I looked into her cold gray eyes, then shifted my eyes to the ground. I could smell the heavy smoke rising from the engines I stared at the rain drops that splattered against the exit window. Smoke drifted into the cabin of the plane.
Posted by Jeanz xx at 13:00