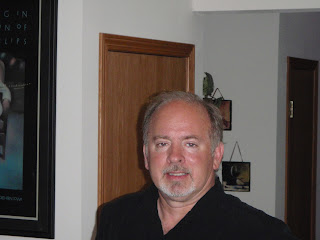 What is your name, where were you born and where do you live now?
I’m a Gerber baby, being born in Fremont, Michigan, home of Gerber Baby Foods, but I live in Madison, Wisconsin now. A place described as 77 Square miles surrounded by reality. And yes, my name is Spike.

Did you always want to be a writer? If not what did you want to be?
I wanted to be the greatest motorcycle racer in the world until reality set in. After all that, I wrote a piece for a bike magazine and they paid me for it. I was in love with two vixens, writing and greed. I took greed and went into business long enough to meet my creditors and their hate mail.
911 reminded me we are mortal and why the hell am I doing this. I went back to the other vixen and wrote a book. Many times. Same book, just again and again. I learned the craft and get hate mail from my friends now.

Do you work another job as well as your writing work?
I do Project Management for a property development company. In my mind I am a writer. In the mind and paycheck of my employer, I’m a project manager. So I travel the Midwest and find wonderful characters in the brilliant people I meet.

Who is your publisher? Or do you self-publish?
Timing is everything and eBook readers such as the Kindle have allowed huge opportunities, allowing authors to keep the rights to their books and get paid a living wage. So I jumped on board and self-published, At First Light.

What can we expect from you in the future? I.e. More books of the same genre? Books of a different genre?
I’m working on a series of short stories called; 13 Stories. A man stands atop of a hotel with thirteen stories, and he jumps; as he passes each window on the way to death, he witnesses a scene that happened sometime during the life of the old hotel. A series of shorts all tied together by the protagonist. I also have a dozen adventure stories that await my decision as they lobby for position inside my head.

What made you decide to write that genre of book?
I wanted to write the books that I love to read.

Do you have a favorite character from your books? And why are they your favourite?
Emma, with all her wisdom and sass; she lived her life without apologies or regret. She’s a storyteller, and a story form Emma is something to covet.

How long have you been writing? and who or what inspired you to write?
I despised writing until I mastered patience. That took 35 years and spell-check. My mind races ahead of my keyboard and splinters into a dozen pathways as I type this. Once I learned how to stay on target, writing became magical. The pure power of creation is why I write. I don’t know what will happen next until it falls out of my mind. And just before that happens, this wonderful feeling of pleasure fills your being and then reveals itself; each scene a new discovery. Who inspires me? The list is long and crosses over to music. Jim Croce is an early influence. His use of emotion, delivered in written form is pure genius.

Where do you get your book plot ideas from? What/Who is your inspiration?
All my plots come from observing people. Many times a small scene plays out on the street between two people, and I read the subtle signs of who they are, a gesture, a gust of wind, a look; and my imagination runs and runs, playing out the entire scene in micro-seconds. Then I apply that emotion into the scene or plot that I need.

Do you have a certain routine you have for writing? i.e. You listen to music, sit in a certain chair?
I write in public places such as coffee houses, or the Union on the campus of UW. I put on my iPod and I observe. The creativity flows like hot butter.

Do you have anybody read your books and give you reviews before you officially release them? i.e. Your partner, children, friends, reviewers you know?
I have three trusted readers that point out the places I have to dig for clarity, and where to throw the dirt over the bad writing. After that I have beta readers that do the same until all the boring, bad, and strange words are put in the grave. Sometimes it’s my favorite stuff, but a writer is so in love with their prose they can’t smell the stink.

Do you gift books to readers to do reviews?
Yes, there are many bloggers who are voracious readers and they read and review books, and give honest opinions. I query them, and if they are interested, I send them a free copy. It’s a win-win.

Do you read all the reviews of your book/books?
So far yes. I hope to gleam wisdom from the people who did not like it. The good ones boost my ego which is needed, because a person who lives the creative life has rejection poured upon them.

Would you ever ask a reviewer to change their review if it was not all positive about your book/books?
No, absolutely not.

How do you come up with the Title and Cover Designs for your book/books? Who designed the Cover of your books?
Damonza, did my cover. I found him on the net and I love his work. I sent him ideas, and he returned covers based on those ideas. Three of us brain-stormed ideas and then we would shoot them to Damonza. He took the things in our heads and made them real, and better. The title came from a person in my writing group, who suggested, First Light. My editor added the At and At First Light came to life.

Are character names and place names decided after their creation? Or do you pick a character/place name and then invent them?
Places are researched after the first draft of a scene. When I find a location that works, the edit turns the scene into the location required. When I need a character, I name them on the spot, right from my head. Most keep that name, but some change in editing.

Do you decide on character traits (i.e. shy, quiet, tomboy girl) before writing the whole book or as you go along?
I give them few traits in the first draft, but as I edit, they grow into real people and their traits fall out on the page. There are a few times, when the character is defined by a trait, and those traits build the character.

Do you basic plot/plan for your book, before you actually begin writing it out? Or do you let the writing flow and see where it takes the story?
Story drives the plot. It’s editing that makes the scene work. Sometimes an earlier scene needs some plot lines inserted to support a later scene so that it all works. I write, then I edit, edit, edit until my first readers quit sending me hate mail.

What do you do to unwind and relax? Do you have a hobby?
I daydream a little too much. An imagination that undergoes training and then left alone to create is a wonderful drug and it will eat you if you don’t keep it on a leash. I love motorcycles and travel. Wish I could sing and rock a guitar, and fly planes, and make movies and and…

Have you ever based characters on people you know or based events on things that have happened to you?
Yes, sometimes spot on, but usually just a part of them, blended with parts of others to make a character that works with the printed word. As far as events that happened to me, that materializes too, with a lot of embellishment.

Is there a certain Author that influenced you in writing?
Jack London and Robert Lewis Stevenson for pure adventure writing, Jim Croce for writing emotion with the use of the written word. Steven King and Eric Jerome Dickey for characters who blossom upon the page so bright you must send them Christmas cards. David Westheimer for pure storytelling chops that is the magic of books. I will stop here before we have to cut down another tree, but the list is long.

What is your favorite book and Why? Have you read it more than once?
Tough call. I can argue for a half dozen but because you backed me into a corner and held a knife to my throat; Jack London’s The Sea Wolf.  The protagonist is alone in a world where every person lords over him and he pays the price with pain and frustration, beautifully displayed with London’s pen. Awash in a ship where he has no skills among hard men, he flourishes through guts and a great mind. And the will to survive as he dominates all on his pathway of destruction with one of the great antagonists of the written word; London’s Captain Wolf Larson.

Do you think books transfer to movies well? Which is you favorite/worst book to movie transfer?
Books, more than all the other elements need story. And all great stories can be made into a great movie. My favorites are Lord of the Rings, and Harry Potter. For me they both laid upon the big screen the very kernel of my imagination.

What are you currently reading? Are you enjoying it? What format is it? (eBook, hardback or paperback)
I drive a lot so I listen to audio-books, and I read books from my phone because it is always with me when I have a few minutes to read. Right now I am reading Shaken, by J.A. Konrath.

Do you think eBooks will ever totally replace printed books?
From wax to vinyl, to tape, to digital, music has changed format, and only collectors keep the old stuff. Books will follow that path.

Do you have a treasured book from your childhood? If yes, what is it?
Beautiful Joe by Margaret Marshall Saunders. A YA book long before it was a genre. The story of an abused dog who overcomes his trials and spreads his love to all in his triumph.

If you could invite three favorite writers to dinner, who would you invite and enjoy chatting with?
Jack London, Ernest Hemingway and Jack Kerouac just to hear the embellished stories that poured from them; stories spiced with a beautiful mind.

Where can readers follow you?
www.spikepedersen.com   Abandon all despair, ye who enter here.