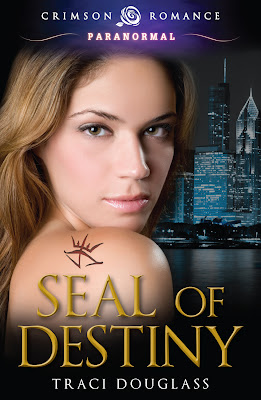 “Basta!” Kagan grabbed her by the arm and twisted slightly, not enough to hurt, but enough to let her know he meant business as he directed her to a corner booth. He ignored the half-full beverages and coats scattered on the seats and shoved Mira into the confined space. When the booth’s original owners took issue with his hostile takeover, Kagan dispatched them with a lethal glare. He wasn’t sure where the girl had gotten the idea his mind was damaged, but he was damn sure he didn’t like it. He moved in behind her to block her escape.

“Oh, hell, no!” After several unsuccessful strikes to his muscled physique, Mira tried to slide out beneath the table. The angle proved too awkward. Defeated, she shoved as far away as she could into the corner and propped those killer boots on the seat in front of her in warning. “You better let me out of here, asshole, before I call the cops! I caught you stalking me, pervert!”

Kagan took a deep breath. He never lost his cool in battle, and he wasn’t about to start now. “Pervert? You’re of age, si?”

Mira glared. Kagan ticked through their earlier interactions, searching for a reason behind her intense hostility. His preternatural instincts sensed her intention before her hand reached his carotid. He blocked her quickly, locking her small hand within his and forcing it to the table beneath his own. Her pulse raced against his palm. He took another swig of beer then flashed his most endearing grin. “Let’s start over.” He released his bottle and extended his hand. “I’m Kagan.”

She refused to acquiesce. Kagan spoke in quiet tones meant to calm, to reassure. “I know I’m a stranger, but we have things to discuss.” He glanced around the crowded club, at the bodies packed tight. “We can’t do it here, though—no privacy. My apartment is close. Why don’t we go there and talk?”

Mira kicked him hard in the thigh.

“Merda!” Kagan grabbed his throbbing leg. “What’s in those damn boots? Marble?”
“Let me out of here, jackass, before I sideline your baby-maker!” Mira struggled within the tight confines of the booth. As she squirmed, the spicy scent of her shampoo wafted, and he was overcome with the strangest urge to plunge his hands into the riotous mass of her hair, to feel it curl around his fingers. She tugged on the hand pinned beneath his, and his thumb traced over her thudding veins. His heart pounding along with hers. The odd tingle sped through his torso, and his mouth turned to cotton. Her gaze blazed up at him, a swirling mix of green and golden brown. He noted the dark smudges below and wondered what kept her from slumber.

Dolce Cristo! Kagan looked away, fought for control. This was getting way out of hand. He couldn’t remember the last time he’d bedded a woman, but apparently it had been far too long.