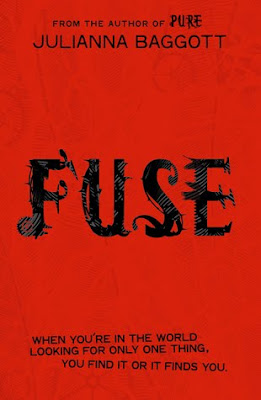 BLURB from Goodreads
After a young Wretch is abducted by the Dome and ‘cleansed’ of her fusings and imperfections, she is only able to repeat the Dome’s latest message: ‘We want our son returned. This girl is proof that we can save you all. If you ignore our plea, we will kill our hostages one at a time.’ Willux will go to any lengths to get his son Partridge back, including murder. Partridge sacrifices himself and returns, in the hope of taking over the Dome from within, only to uncover more of his father’s chilling, dark secrets.Outside the Dome, Pressia, Bradwell, and El Capitan are decoding the secrets from the past – tucked away in one of the Black Boxes – to uncover the truth that might set the wretches free of their fusings forever. Those fighting Willux will be pushed over boundaries, both land and sea, heart and mind, in their quest – further than they ever imagined.

MY REVIEW
I was lucky enough to receive a beautiful ARC copy of Fuse free in exchange for my honest thoughts and review of it.
I have to say this is one BK#2 that I 'd really been looking forward to. I had seriously enjoyed Bk #1 Pure so this second book in the series had quite a lot to live up to. I had pretty high expectations of it.
At first I really hated the plain red cover, but over time it has grown on me and as you know I love a good byline and this cover has that. "When you're in the world looking for only one thing, you find it or it finds you" Hmm quite a cryptic byline, to fit quite a cryptic book really.
So we pick up the story again as a wretch has been released by the Dome. This wretch has been made Pure, her fusings removed, so you'd think that's all good? Maybe but this is the "Dome" we are talking about, the girl seems to have been re-programmed too as all she can say is one piece of information. Her message is ‘We want our son returned. This girl is proof that we can save you all. If you ignore our plea, we will kill our hostages one at a time.’
So El Capitan, Pressia, Bradwell, Partridge, Lyda and the others have to try and work out what it all means. Before they get much chance to think about anything, robotic spiders begin swarming in.....what are they? where are they from? what do they do?
The group finds out all too soon.
Partridge decides he must return to the Dome to avoid deaths and says he will try to continue the fight from inside the Dome. From documents the group have found they know that there are people inside the Dome that will help Partridge in his fight against his father. But why does Willux want his son back? Sedge was always the favourite son? What wicked plan does Willux have in mind for Partridge.
With Partridge gone it leaves, Pressia, Bradwell and El Capitan+Helmud to decode the black boxes and to follow their cryptic clues, to find a formula that could possibly set all wretches free once again.
So the fight on the outside also goes on, we learn more about "the mothers" and learn of other survivors.
Pressia, Bradwell and El Capitan+Helmud have a dangerous mission to undertake. They have to travel farther than anyone ever has, and stray into areas that have unknown dangers awaiting them. Will their mission be successful? So much depends upon it.
This book is so well written you are immediately transported back to the Wastelands with the Wretches as soon as you pick up the book. You slip really easily back into the storyline. You feel like you are there fighting along side of each and everyone of those brave enough to make any kind of stand against the Dome. We go further into the relationships of Pressia, and Bradwell, is it love they feel for each other? Dare they give in to loving one another, as have they not always lost everything and everyone they ever held dear to them?
Then there's Partridge and Lyda, who pass a point of no return with consequences that could literally spark a war.
We find out a little more about "The Mothers2 and why they hate men or "Deaths" as they call them so much. All the mothers have been abandoned by their men folk and have had to learn to fight, to defend themselves and fight for survival.
This book has so many different layers and levels, it has your mind thinking about it the whole time you are reading, wondering what consequences will come of certain actions that are taken. The book has love, friendship, unrequited love, danger, bravery,intrigue, strange technology all wrapped up in a dystopian world.
We also learn more about the technology of inside the Dome. You may think Partridge is "safe" back in the Dome but he is far from it, being subjected to his fathers warped experiments and not knowing whom he may trust on the inside.
So did I enjoy the book? Loved it! Would I recommend the book? Highly recommend it! Would I read a Bk#3? Definitely I would read it now if it were available!
Would I read more by Julianna Baggot? Yes, I would certainly give any other books by her a close look.