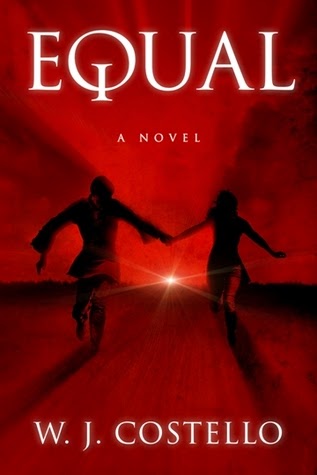 This collection contains all 3 EQUAL books (Part1,Part2,Part3) in a single book.

BLURB from Goodreads
Janus is a lawman who enforces society's most sacred law-the law that every citizen must be Equal in every possible way. Physically. Mentally. Emotionally.But when Janus falls in love with a woman who's broken the most sacred law he begins a transformative journey of self-discovery that makes him question the society in which he lives.Now he must choose between love and duty. Will he bring the woman to justice? Or will he join her and become a lawbreaker himself?

Did you always want to be a writer? If not what did you want to be?
My boyhood dream was to become a professional cartoonist. I achieved that dream. A few months after graduating from college I became the political cartoonist for the Lowell Sun in Massachusetts. Then I became nationally syndicated to over 600 newspapers through Newspaper Enterprise Association. I was frequently published in USA Today, the New York Times, the Washington Post, Newsweek, Forbes, National Geographic, National Journal, and several editions of the Best Editorial Cartoons of the Year book series. But then the newspaper industry started to die. Political cartoonists started losing their jobs. There was no future in political cartooning. So I got out of the business, earned a master’s degree, and moved on. That’s when my dream shifted to becoming a writer.

What is the name of your latest book, and if you had to summarise it in less than 20 words what would you say?
Equal. Two lovers try to escape from a “utopian” society that has spun out of control.

Do you have a favourite character from your books? and why are they your favourite?
Diana in Equal. She’s a strong female protagonist who overcomes tremendous obstacles in pursuit of freedom.

What piece of advice would you give to a new writer?
Get the first book written. Only then can you really study and analyze other writers. Equal is my second novel. My first novel turned out fine, but it wasn’t great. It wasn’t something I wanted to share with the world. But it was a great learning experience. After writing it I spent six solid months studying other novelists and reading books about writing novels. Then I felt prepared to write Equal. Then I felt like I knew what I was doing. But it wouldn’t have been possible had I not written that first novel.

Do you have a certain routine you have for writing?
Rise at five a.m. Write 500 words. Go for a run and do some strength training. Write 500 more words. Relax. Repeat the next day.

Do you basic plot/plan for your book, before you actually begin writing it out? Or do you let the writing flow and see where it takes the story?
Both. I plot up to a certain point and then begin to write. A week or two later, when I run out of plot, I stop writing and start to plot again.

What is your favourite book and Why? Have you read it more than once?
Animal Farm by George Orwell. His use of simple symbolism to express complex ideas was pure genius. I’ve read the book several times.

What do you do to unwind and relax? Do you have a hobby?
Traveling. I’ve visited Mexico, Canada, the Bahamas, most of the East Asian countries, and a few countries in Europe. In America I’ve been to all of the coastal states and several non-coastal states.