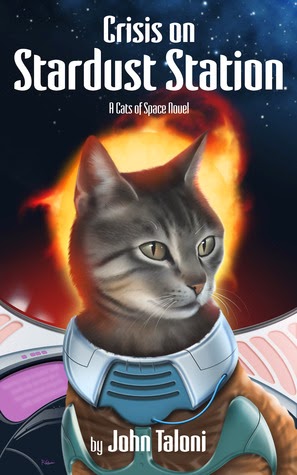 BLURB from Amazon
A few hundred years from now, Earth has gone to space...and come back. The remnant of a once vibrant space effort persists in the form of a few hundred solar power satellites that provide half of the world's power. John Aldrin is one of four people crewing the last remaining space station, with the mission to keep the satellites operating. But Earth has neglected them so long that they are on the verge of breakdown. Benign neglect has allowed something else to happen: In the station's forest habitat, a group of genetically modified cats have grown to intelligence. Some have been adopted by the astronauts and brought to their living area. Natural telepaths, both groups of Cats have agreed to keep the knowledge of their intelligence secret from the humans. Their equilibrium is destroyed when a solar flare strikes and knocks out the satellites. The Cats must reveal their secret to save both their station and the world below. But can they convince a skeptical Earth to work with them?


AUTHOR INTERVIEW
What is the name of your latest book, and if you had to summarise it in less than 20 words what would you say?
My latest (and first!) book is “Crisis on Stardust Station.”  It's about a secret race of intelligent cats on a space station who have to work with humans to save Earth's civilization.

Who is your publisher? or do you self publish?
I self publish.  I really love the democratizing effects of technology here.  Anyone with a book can self publish through one of multiple channels, and keep the majority of the revenue earned.  There are many authors that skip the traditional publication market now, and it's all due to the new ebook formats.

How long does it usually take you to write a book, from the original idea to finishing writing it?
It generally takes me six months start to finish.  That's while doing my regular “day” job.  I think I'd be a lot faster if I wrote full time.  That's the dream anyway!

Do you have plans for a new book? Is this book part of a series?
There will definitely be a sequel to “Crisis on Stardust Station” – it's already written and has gone to beta readers.  I expect to put it out in a month or two.  The upside of self publication is that when I think it's done, up it goes!  No need for a six month print and distribute process.

What genre would you place your books into?
It's science fiction with elements of fantasy.  The science is as good as I can make it – I want that part to be as realistic as possible.  The fantasy element comes in with the telepathic cats.  Some of them also have psi powers like telekinesis.

What made you decide to write that genre of book?
I've always been a science fiction fan and when I have written stories in the past they have always been science fiction.  In this case, my then eight year old daughter asked me to write a story about our cats.  I looked at her and said “okay, but I want to set it on a space station.”
Our whole family is science fiction fans.  We weren't sure our daughter would be, but when she was five we decided it would be okay to watch a Doctor Who with her in the room.  She played with her toys and didn't comment on the show.  It was a Dalek episode.  The next week she looked up at us and asked if we could see more of the show with “the robots that say 'exterminate.'”  She's now a big Doctor Who fan and also reads SF books.

Do you have a favourite character from your books? and why are they your favourite?
Yes, my favorite is the main Cat from “Crisis on Stardust Station,” named Mrrowl.  He's the leader of the combined Cat groups.  He isn't the strongest or even the most powerful telepath.  But he's the Cat most capable of leading the combined groups.  He also works well with humans and was essentially undercover as the pet of one of the few humans on the station.

Do you have anybody read your books and give you reviews before you officially release them?ie. Your partner, children, friends, reviewers you know?
Yes, I have a small group of beta readers – some family and friends.  I do make changes based on their suggestions.

Do you decide on character traits (ie shy, quiet, tomboy girl) before writing the whole book or as you go along?
I have the book sketched out in my head before starting, including all major characters and their personalities.  However, while working out major plot points the expression of personality can take paths I hadn't anticipated.  For instance, the Commander of the station is a forceful personality as well as the best engineer, and despite being put in a coma by the solar flare, she finds a way to make her knowledge available.

Are there any hidden messages or morals contained in your books?
I definitely have a theme, which is “space travel can be dangerous.  But it's glorious, and worth the risk.”

Is there a certain Author that influenced you in writing?
There's two, actually.  As a teen I greatly enjoyed the Dragonriders of Pern series by Anne McCaffrey.  I loved the telepathic dragons and the well thought out world – an Earth colony fallen to feudalism.  On the more technical side I liked Larry Niven and his emphasis on scientific realism.  Both come together in “Crisis on Stardust Station.”  The telepathic cats are similar to fire lizards in the way they communicate, and the science is as good as I can make it.

Are there any New Authors you are interested in for us to watch out for? and Why should we watch out for them?
Kate Danley is doing pretty well.  She gives panels for new authors at conventions and is quite an inspiration.  Kate is self published and doing it all herself, completely without a publishing company.  She writes fantasy and is making a living at writing all on her own.

Your Blog Details?  I blog on my goodreads author page.
Your Website?  http://starduststation.com/Fiction.html
Your Facebook Page? https://www.facebook.com/CatsOfSpace
Your Goodreads Author Page?  https://www.goodreads.com/author/show/7348070.John_Taloni
Posted by Jeanz xx at 14:00