Half a century after the world was decimated by a bio-engineered plague, military scouts are acquisitioning a new supply of exports—slaves.

With his family dead, sixteen-year-old Cameron Landry is a reluctant survivor, haunted by nightmares and bound by promises. When he and his worst enemy, Devon, are both selected for shipment to a civilization called Salvation, Cam suddenly has nowhere to run. Devon is a mutant, stronger and faster, and his hatred for Cam grows with each passing day. As Cam makes friends, and finds a surprising ally in Devon’s twin sister, Tara, he learns a secret that could change everything.

But Devon is on the hunt, and Cam is running out of places to hide. 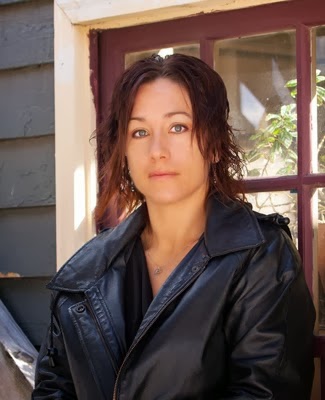 Christine Nielson Haggerty grew up in rural Utah with three brothers, a sister, several chickens, a goat, and an outhouse. She always loved the escape of science fiction and fantasy and the art of writing, and her passion is to craft stories of strength and survival.

Christine taught high school language arts for several years, encouraging perfection of the language in her young adult students. Now she appreciates her background in classic literature and history as she draws on the past to write about the present and the future.

You can follow her news and mental wanderings at www.christinehaggertyauthor.com

Did you always want to be a writer? If not, what did you want to be?
I’ve wanted to be a few different things. In high school, my list included being a photojournalist for National Geographic, FBI agent, veterinarian, or professional soccer player. I was actually offered a scholarship to Westpoint, but my mom told me I’d probably just get kicked out, so I stayed near home, got married, and became an English teacher. Teaching writing developed my passion for the craft, and now I’ve published my first novel, The Plague Legacy: Acquisitions.

What can we expect from you in the future?
I am currently writing the two other books in The Plague Legacy series, Assets and Liabilities, to be published late fall 2014 and 2015. I also have a novella in the revision stage that is a rewrite of the Grimm brothers’ “The Robber Bridegroom.” My long term plans? To keep writing and writing and writing…..

If you had to choose to be one of your characters in your book The Plague Legacy: Acquisitions, which would you be? And why?
If I had to choose, I would be Myla. She’s a teenage girl (not the main character) whose DNA has bonded with a bio-engineered plague and mutated her into a superstrong human being. Since others are mutants as well, that’s not what makes her special. She’s full of spunk and spit and fights for her friends.

Where do you get your book plot ideas from? What/Who is your inspiration?
Book ideas come from as many places as there are places. The idea for The Plague Legacy came from events in history. I have a sci-fi brewing that was inspired by an episode on the Discovery Channel, and my kids are each an inspiration all their own.

What do you think makes a book a really good/bestseller?
I think that the readers have a lot do with whether a book is a bestseller. The label of bestseller has more to do with advertising and promotion sometimes than the book, so I consider a book with true fans to be a good book. I know I have my preferences. When I read, I pay attention to the construction of the book as well as the story.

Have you ever suffered from a ‘writer’s block’? What did you do to get past the ‘block’?
I joke around that my five-year-old daughter is the poster child for ‘writer’s block,’ but really she’s just a cute distraction. The most struggle I’ve had with my writing flow was after I finished Acquisitions and tried to get started on Assets. I had a hard time shifting from the revision process back into the creative process, but I’m on a roll now.

What do you do to unwind and relax? Do you have a hobby?
My best chance for relaxation is when I make sure I get a hard workout. I’m a black belt in Shotokan karate and I hope to earn enough money in book sales to pay for dojo fees in my new hometown. I also spin fire (poi) and, of course, love to read.

What is your favourite book and why? Have you read it more than once?
My favorite book is Illusions by Richard Bach. I haven’t lived my life the same since I read it, and I’ve read it a few times. The single book I’ve read the most, at least thirteen times since I was twelve years old, is Ender’s Game by Orson Scott Card.

Do you have a favourite genre of book?
I’ve always loved fantasy, particularly dystopian. I also like sci-fi and some horror.


Swallowing, Cam stared as the star winked on. She wasn’t angry, he realized as he recalled her scowl, the darkness in her eyes, she was afraid.