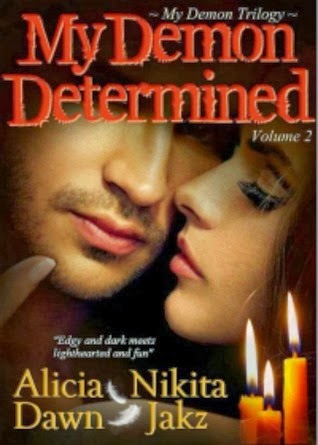 BLURB from Goodreads
“Into the bowels of hell I would follow you.” “Good because that's exactly where we’re going.” Never in her wildest nightmares did Seraphina see herself taking refuge in the underworld. Cole, however, should have seen it coming. Sera’s kin would never let her go and that was the one place their holier-than-thou feet couldn’t tread. Unfortunately, residing in a realm where the vilest of depravity thrives only adds to Cole’s problems. Now he must keep Sera safe from not only her kind, but his debauched brethren as well. Even Cole’s demon-half has become more volatile, the constant subjection to evil taking its toll. His world is no place for an angel. He needs to find a solution so he can get her the hell out of there. And he needs to find it fast. When the opportunity arises to finally solve their dilemma, he jumps at it with talon-claws swinging. But it’s a dangerous mission - and Sera’s riding shotgun. As deadly adventures unfold and all hope seems lost, Cole is forced to search inside himself. With a soul that’s riddled with more questions than answers, can he find the lifeline they need?

Did you always want to be a writer? If not what did you want to be?
Nikita: I have always loved to write. It came easily for me from a very young age. But back then, self-doubt controlled a large part of my vision for the future. It seems growing older does have its pluses, because over time my self-confidence did begin to grow. When my first book idea came to me, it was so powerful that I knew in that moment that I wanted to write for the rest of my life... and never ever stop. :)
Alicia:  I wrote off and on when I was younger making up stories, or poems, but I never wanted to ‘be’ a writer until 3 years ago.

When did you first consider yourself as a "writer"?
Nikita: I think I considered myself a writer ever since I began writing my own stories. As opposed to engaging in a kind of fan fiction, I began creating my own characters and my own stories, doing it every single day out of need as much as fun. It was (and still is) an utter passion, whether others see my work or not, and I think it’s possessing that kind of fever (and acting on it) that essentially establishes one as a writer.
Alicia: When we published our first book? Actually I just love creating stories and creating all the fun adventurous creations, that my imagination can come up with. So I don’t think of myself as a writer. Just one that loves to tell stories.

Did it take a long time to get your first book published?
Alicia: We wrote together for 2 years before we thought about publishing what we had written.
Nikita: Once we finished our first book, the publishing process went very quickly because we’d agreed to go the self-publish route initially. In one day we had our story up on countless bookselling sites. Once we finish the trilogy, however, (set for April 2014) we plan to take our baby to a few publishing houses, which we anticipate will take quite a bit longer. ;)

What is the name of your latest book, and if you had to summarise it in less than 20 words what would you say?
Alicia: “My Demon Determined.”
Nikita: A demon and his angel, fighting against fate to be together, enduring hell (in all its crazy forms) to achieve it.

Who is your publisher? Or do you self publish?
Alicia: We are self-published
Nikita: Yes. What she said. LOL

How long does it usually take you to write a book, from the original idea to finishing writing it?
Alicia: We try to get them out in a timely manner so no one forgets what the first book is about being we are doing a trilogy of these characters. Six months is what we shoot for.
Nikita: There are so many different variants affecting the speed in which I write my different stories, so that’s a really difficult question to answer. With our “My Demon Trilogy,” though, I think it will take us about two years total by the time it’s complete, as we view it as ultimately one story, broken into three parts.

What can we expect from you in the future? ie More books of the same genre? Books of a different genre?
Alicia: There is a third book due out next year, and we have one more in the works to write after that. The genre is the same.
Nikita: Yes, after we complete the My Demon Trilogy, we’d like to do a spin-off of the series involving character(s) the readers meet in the trilogy. I also have a handful of other projects currently in the works that I’m very excited about. All are paranormal romance, but one will have a distinct sci-fi edge to it!

Do you have plans for a new book? Is this book part of a series?
Alicia: The third book will be the wrap up to the “My Demon Trilogy.”
Nikita: Yes, and it is set to release in April of 2014.

What genre would you place your books into?
Alicia & Nikita: (in unison) Paranormal Romance

What made you decide to write that genre of book?
Nikita: For me, that’s the genre I love and obsess over, so it was a no-brainer. I crave the excitement that other species and worlds offer. It makes the sky the limit, where anything is possible. I absolutely love that.
Alicia:  I’ve always read this genre, and others but this one (paranormal) is fun to write. There is no boundries, but your imagination.

Do you have a favourite out of the books you have written? If so why is it your favourite?
Nikita: No way. All three books are equally packed with wildly crazy and deliciously exasperating scenes, each story’s driving force just as captivatingly heart-wrenching as the next. Nope, I’d never be able to chose. :)
Alicia:  What she said all three are great. Me either I would not ever be able to choose just one.

Do you have a favourite character from your books? and why are they your favourite?
Nikita: Well of course for me, my favorite character is Cole. He is, after all, the one who lured Sera to life. Without him, she would never have been, but now that she is, I could never have as much fun if I didn’t have Cole to torment! He is my heart’s delight, an amazing muse, and arguably the sexiest demon (in body and mind) that ever graced the paranormal page.

If you had to choose to be one of your characters in your book/books which would you be? and why?
Nikita: Sera, of course! With an intrinsically good heart, she’s also an utter goofball. I love goofballs. Yet, when it comes to times that matter, she’s also quite the badass. Besides, who wouldn’t want to have huge, gorgeous wings?
Alicia:  I’d like to be Cole just for his sense of  dry humor, and he is just a up front pulls no punches, take it like it is person.

How long have you been writing?, and who or what inspired you to write?
Nikita: I’ve been writing off and on since I was an adolescent, but didn’t start doing it seriously, and with a passion, until a few years ago. And without a doubt, my favorite authors and their incredible stories have been my inspiration for writing. I want to bring the kind of enjoyment they give to me to any who are willing to give our stories a chance. :)
Alicia:  I did not get serious about writing until three years ago when I started Rp’ing on Facebook. It’s hard to choose what inspired me but mostly my love of all the authors I read or have read. They do it so damn good that I was in awe of their talent. I have discovered that I enjoy entertaining by writing.

Where do you get your book plot ideas from?
Nikita:  Like I said earlier, in the My Demon Trilogy, Cole was the driving force behind the idea of Sera. And in the process of bringing her to life, their story came tumbling into existence, too. It was a glorious day of brainstorming that still makes my heart pound just thinking about. My other plot ideas have come from all kinds of places, though I’d probably have to say that songs and images are where most tend to originate.

Do you have anybody read your books and give you reviews before you officially release them?ie. Your partner, children, friends, reviewers you know?
We have beta readers that read and give us their take on what we write.

Do you read all the reviews of your book/books?
Yes, we like to see the feedback of what people think of our books.

How do you come up with the Title and Cover Designs for your book/books?
Nikita makes our cover designs, which are awesome. As for titles we kick around names until we come up with one we both like. This might take minutes or an hour.  They are always subject to change before we are done writing the book.

How do you market/promote your books?
We promote on all the social sights, and lots of word of mouth helps to.


Do you market the book any differently with it having two authors?
No not really, it just means there is more people hearing about us since there is two of us, two times the friends that tell other people. It works out great.

How do you decide who writes which part of the book?
We basically write for our character, and bounce back and forth it works and flows for us.

If there's a disagreement, say about plot, title, cover etc how do you solve it?
We discuss what it is and then go about making sure that we are on the same page, and that we are good with whatever the problem might be.

Who decides which name goes first on the book?
With us it really does not matter who’s first or second.

Do you get together in the same room to do the writing or is it all done via computers?


Being we both live a long way from each other it’s done via computer or skype when we need to discuss things.

What piece of advice would you give to a new writer?
As long as you're doing something you enjoy, then go for it. No matter what never give up that dream, because one day it will happen.