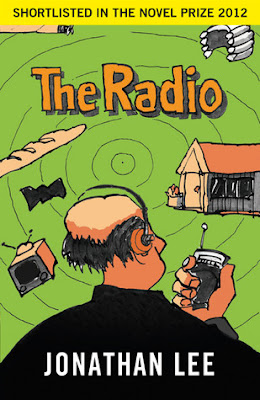 What is your name, where were you born and where do you live now?
My name is Jonathan Lee (published under M. Jonathan Lee), I was born in Barnsley, South Yorkshire and remain there to this day.

Did you always want to be a writer? If not what did you want to be?
After the glamour of footballer and rock star, writer was next on the list.  It became apparent by the age of ten that I wasn't going to make it in the 'spotlight' vocation choices!

When did you first consider yourself as a "writer"?
Probably in the summer of 2012, when my debut novel The Radio was shortlisted in The Novel Prize for new authors.  This was the first time that an independent panel of judges from the industry acknowledged my work and made me feel that I could actually write.

Do you work another job as well as your writing work?
I do. Sadly I have a normal office job, but I'm hoping that maybe one day I can sell enough books to make a living doing what I love best.

What is the name of your latest book, and if you had to summarise it in less than 20 words what would you say?
My latest book is The Radio. In twenty words, hmm...
A black comedy about a henpecked man who lost his son to suicide. Amusing and poignant with a twist. Semi-autobiographical.

How long does it usually take you to write a book, from the original idea to finishing writing it?
If I had the time actually just sit and write for a few hours every day, I'd say six months.  However due to work, children and promotion of The Radio, the timescale is stretched out much much more.

Do you have plans for a new book? Is this book part of a series?
The Radio ends with a twist, and is part of a trilogy. At the moment however, I am writing The Page, a thriller and another with a twist.  The story goes...
Following a tragic car accident, Michael Sewell is alone and lost for the first time. The loss of his wife, Margaret after thirty years of marriage has left a hole far greater than Michael could have imagined.
Persuaded to go on holiday alone for the first time since this accident, by his daughter Jane, a page blown from a book crosses the pool and sticks to his chest.
The words from the page resonate with Michael, describing in detail the recent events in his own life.
Now, Michael must delve into his past and face his future, taking him and his family on a horrifying and tragic journey toward the truth.

What genre would you place your books into?  [What made you decide to write that genre of book?]
Generally family based observational contemporary fiction, if there is such a genre! I love looking into the workings of family life. I like to add some wit and humour, because generally in life humour greets us at every corner.

Where do you get your book plot ideas from?What/Who is your inspiration?
Inspiration comes every day, it can be a chance meeting, or just seeing somebody walking their dog. I love to imagine who they are, where they are going and what the day holds for them. The words 'what if' are always at the forefront of my mind, then I just let my imagination run.

Do you have a certain routine you have for writing? ie You listen to music, sit in a certain chair?
I do. I need it to be completely silent. No sound whatsoever and I feel better when I know nobody else is in the house either! Not much to ask, eh?

Do you gift books to readers to do reviews? [Do you read all the reviews of your book/books?]
Yes, I am always interested in the views of people who read lots of books and I am happy to forward review copies for this purpose.  Unfortunately, I do tend to read all reviews - though I have learned from life that everyone cannot possibly like the same thing and thus totally respect the views of those who didn't take to The Radio.

Are character names and place names decided after their creation? or do you pick a character/place name and then invent them?
No, they are decided on creation.  I think of the character and who I want them to be and then select a name which I think fits. In The Radio, a number of the character's names changed right up to the final draft!

Do you decide on character traits (ie shy, quiet, tomboy girl) before writing the whole book or as you go along?
I have a very basic idea of how they are in my mind (good, bad, selfish, negative), but their traits and actions develop organically whilst writing.

Do you basic plot/plan for your book, before you actually begin writing it out? Or do you let the writing flow and see where it takes the story?
I have one or two sentences which describe the entire story from start to finish. I know in my mind the traits of the key protagonists, the rest simply just flows. When I write, I picture a film of the action taking place in my mind. I can feel and smell and see everything around me and simply write how I visualise that to be, how it would be if I were an invisible spectator to the events.

Have you ever based characters on people you know or based events on things that have happened to you?
Absolutely. All the characters in my books are somewhat exaggerated traits taken from observations of people I have met during my own life. The Radio is somewhat semi-autobiographical as it deals with suicide, something that sadly I lost my brother to a number of years ago.

Is there a certain Author that influenced you in writing?
Stephen King, Roald Dahl and Iain Banks have historically been my favourites. Latterly, I have been fortunate to have been  compared to two of my more recent favourites, Mark Haddon and Nick Hornby.

What is your favourite book and Why?  Have you read it more than once?
Roald Dahl's Unexpected Tales collections.  Absolutely love stories with twists in them, hence there being a huge twist in The Radio.  I have read Roald Dahl's collections more than twenty times, I would think.

What piece of advice would you give to a new writer?
Treat writing like a job. Book time periods in your diary to write. Stick to them rigidly whether or not you feel like writing that day. Get all your ideas down, worry about editing and how it flows at the end.
Where can readers follow you?
All the below places!