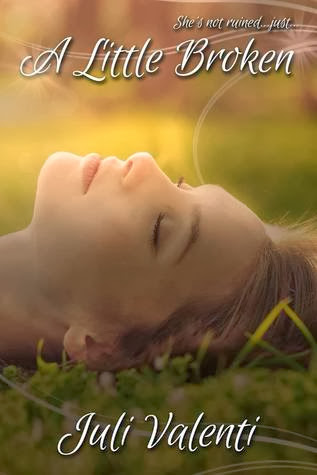 BLURB supplied by Girls Heart Books Blog Tours
Jessie Braden thought she had it all. A husband, a new baby – her life was on course, exactly what she always wanted…Until one day, she loses everything.
Ruined and broken, she’s left alone to pick up the pieces of her life. Unable to cope, she spontaneously packs up and moves across the country, hoping that new scenery will help.
Once in sunny Florida, she finds an apartment and a job but while Jessie is surviving, she isn’t living…until one night she meets someone. Dominick.
Desperate for an escape from the pain of her memories, she relents to his unerring determination and agrees to spend time with him.
Through his patience and understanding, she will learn that she’s not ruined…she’s just a little broken. 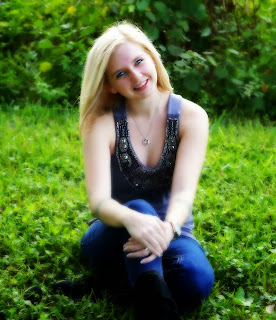 Juli Valenti grew up in Arkansas and currently resides in Florida with her husband and two boys. Working a full time job, as well as owning her own editing company, along with a full time family, her life is crazy but she wouldn’t have it any other way.
Juli is currently working on several other true-life inspired novels.

What is your name, where were you born and where do you live now?
Juli Valenti. I was born in Hemet, California and now reside in Tampa (ish), Florida

Did it take a long time to get your first book published?
I self-published so it wasn’t too bad. I started writing in June and published by October

Do you work another job as well as your writing work?
A couple actually. I’m the front desk/clinic services lead for an orthopaedic office, own my own editing company (Juli’s Elite Editing) and I’m a full time mom :)

What is the name of your latest book, and if you had to summarise it in less than 20 words what would you say?
A Little Broken. Regardless of the pain/hurt/troubles in life, we’re all survivors. We’re all a little broken.

Who is your publisher? or do you self publish?
self! :)

What can we expect from you in the future?  ie More books of the same genre? Books of a different genre?
I’ll probably stick with romance (ish) books. Possibly a paranormal romance that I started before ALB

Do you have a favourite character from your books? and why are they your favourite?
My favorite character is actually from a short story I’m working on for an Anthology (to be published in February) - Raven. She literally makes me laugh out loud.

Where do you get your book plot ideas from?What/Who is your inspiration?
I’m planning a long stream of novels that are all based on true stories/true struggles that others have survived. I pull inspiration from everything, so be careful what’s said to me! It could become a part of a book!

Do you have a certain routine you have for writing? ie You listen to music, sit in a certain chair?
HA! I do! I sit in a specific spot on my couch, reclined, and eat fruit gushers and fruit by the foot :)

Do you gift books to readers to do reviews?
Not solely based on reviews, no. I’ll gift my book and ask for a review when finished, but I don’t require it.

Do you read all the reviews of your book/books?
Unfortunately, I do. I need to stop that.

What was the toughest/best review you have ever had?
There’s one on Goodreads, complete with memes that had me jumping up and down. You should read it!

Do you choose a title first, or write the book then choose the title?
Sort of in between. I’ll start writing and it will generally come to me at some point.
How do you come up with characters names and place names in your books?
Since I know ‘who’ the characters will be, I generally just use the first name that correlates for me. It’s the last names that are rough - I have to bounce off a sounding wall for opinions sometimes.

Are character names and place names decided after there creation? or do you pick a character/place name and then invent them?
I know the details of the characters before they have names.

Have you ever suffered from a "writer's block"? What did you do to get past the "block"?
I’ll put it up, think on it/dream on it. I have a couple people I trust that I’ll bounce ideas off of/talk it out which is all it takes sometimes.

Have you ever based characters on people you know or based events on things that have happened to you?
Yes. A Little Broken is based on a true story and several people in the book are quite real.

Do you think ebooks will ever totally replace printed books?
It’s unfortunate, but more than likely. E-readers are becoming more affordable and the ease of availability of books is crazy.

Did you read a lot at school and write lots of stories or is being a writer something newer in your life?
I’ve been reading since I was tiny! Same with writing (I started with song lyrics, actually)

Do you have a favourite genre of book?
Romance/Paranormal Romance actually - I love me some hot vampire men :)

What do you think about book trailers?
I like them! If you can afford them go for it!

What piece of advice would you give to a new writer?
Write. Regardless of if you hate it or love it, write it. Nothing will ever be accomplished if you don’t!

Do you or would you ever use a pen name?
No. I’m very proud of my accomplishment(s) and always want my name on it. I wouldn’t publish if I was ashamed and couldn’t use my own name. I’d debate initialling myself (J.D. Valenti) but never pen name *personal opinion*

Your Blog Details? N/A
Your Website? (My hubs bought me a website design program for Christmas! This will be coming soon!)
Your Facebook Page? www.facebook.com/authorjulivalenti
Your Goodreads Author Page? www.goodreads.com/bitethevampvamp (don’t ask! HA!)
Your Twitter Details? @thejulivalenti