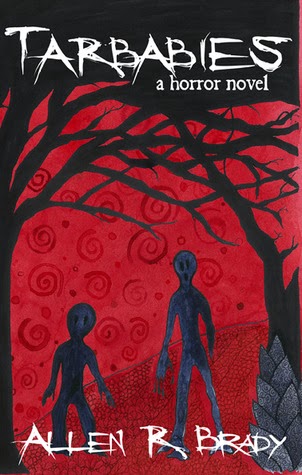 BLURB from Goodreads
That thing on the porch won't go away. I called the police, but I don't think they're coming. They've got their hands full with the Manhattan quarantine, so they can't waste their time on a nothing little town like Otterkill. That means it's up to me and the neighbors, and there are fewer of us every day. Fewer of us, and more of them. Every person we lose is one more monster to deal with. The Spiller family, the folks from the Retirement Center, even the Mathises' Rottweiler are now stalking the streets, waiting for someone to get too close. A single touch is all it takes. I don't know which of my neighbors became the thing on the porch, and I suppose it doesn't matter. I've got to get out of here, but the Tarbabies are already showing up in Albany, and Philadelphia, and Pittsburgh. There's nowhere left to run, and there's no point in hiding. Not when the shadows themselves are after you. 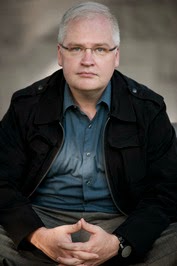 Allen R. Brady lives in New York's Orange County. In addition to the TARBABIES novel series, he has written plays for the Air Pirates Radio Theater, which are performed in venues throughout the Hudson Valley.

What is your name, where were you born and where do you live now?
Hello! I’m Allen R. Brady, a writer based in New York’s Hudson Valley. I’ve lived all over New York State, from the shores of Lake Ontario all the way down to Manhattan, but have finally settle in Orange County, just at the base of the Catskill Mountains.

Did you always want to be a writer? If not what did you want to be?
I flirted with the idea of writing professionally when I was younger, but came to the sad conclusion that I had no idea of what I wanted to say. The Internet was not an option at this point, so there weren’t as many outlets available for new voices to express themselves. Ultimately, I fell into writing because of a bad commuting decision.

When did you first consider yourself as a "writer"?
A few years back, I fell in with a local theater troupe called the Air Pirates Radio Theater. The day they performed one of my plays was the first time I felt qualified to wear the title.

Did it take a long time to get your first book published?
It certainly seems that way, though I’ve heard of much worse stories than my own. I started writing my first novel, TARBABIES, while watching the Beijing Olympics in 2008. It was finished in 2009, picked up by Spore Press in 2012, and finally saw print in 2013.

Do you work another job as well as your writing work?
Sadly, telling spooky stories can’t be relied upon to get the bills paid. By day I am a database developer. It’s writing of a sort, I guess, just with fewer swamp monsters.

What is the name of your latest book, and if you had to summarise it in less than 20 words what would you say?
TARBABIES is the story of monsters overrunning a small Hudson Valley town, and it’s a whole lot of fun. (Bingo! 19 words!)

Who is your publisher? or do you self publish?
Spore Press, an Arkansas-based publisher specializing in tales of biological science-fiction and horror.

How long does it usually take you to write a book, from the original idea to finishing writing it?
I’ve completed four novels so far, and they’ve averaged about nine months each.

Do you have plans for a new book? Is this book part of a series?
TARBABIES is the first of a series, of which three have now been completed. Book 2: the Siege at Friendly Haven is due out from Spore Press shortly. I’ve just finished Book 3: the Honey Pot of Defiance, and hope to see it on Spore’s calendar some time in 2014. I’m currently working on a Christmas story aimed at Young Adult readers, and I’ve got a time travel story that is still looking for a home.

What genre would you place your books into?
The TARBABIES series would fit in best on the Horror shelf, but it’s a lot lighter in tone than most of that genre. It straddles the line between Horror and Humor.

What made you decide to write that genre of book?
I’ve always been a fan of horror, but never had the temperament to write unrelentingly dark material. The works of Christopher Moore convinced me that there was an audience for books about the paranormal that aren’t mired in gloom and despair.

Do you have a favourite out of the books you have written? If so why is it your favourite?
I had a lot of fun with Book 2 in the TARBABIES series. It’s told from multiple vantage points, and experimenting with all of the various voices involved was inordinately entertaining.

Do you have a favourite character from your books? and why are they your favourite?
I have a special fondness for Doris, one of the main characters from Book 2, simply because I’ve never quite seen anything like her. I don’t want to give too much away, but she’s not the typical hero of apocalyptic monster fiction. You’ll meet her in Book 1, but her story doesn’t take center stage until Book 2.

Where do you get your book plot ideas from?What/Who is your inspiration?
Most of the ideas I’ve come up with so far have been inspired by an absence in what I’ve seen coming from mainstream literature. I’ve been a fan of apocalyptic horror since Dawn of the Dead, but stories of this kind always seem to devolve into characters stockpiling weapons to fight off roving rape gangs. I wanted to create a story in which the monsters are the problem, and this problem can’t be solved just by shooting at it. In a nutshell, that’s where TARBABIES came from.

Do you have a certain routine you have for writing? ie You listen to music, sit in a certain chair?
Almost all of my writing is done on a train. I spend three hours a day on the Metro-North Hudson Line between Beacon and Manhattan. It’s a tedious commute, but it has the benefit of guaranteeing me three hours a day when I have nothing better to do than write.

Do you gift books to readers to do reviews?
Certainly. I still have to get the hang of the publicity side of the publishing business. Until I have that figured out, I’m doing whatever I can to get my book in the hands of anyone who is interested.

Would you ever ask a reviewer to change their review if it was not all positive about your book/books?
This strikes me as a terrible idea for everyone concerned. Reviews are for the readers’ benefit, not the writer’s.

How do you come up with the Title and Cover Designs for your book/books?Who designed the Cover of your books?
The title for TARBABIES was my own. The monsters in my book were partly inspired by the Tar-Baby in the Uncle Remus collection, so the title seemed a natural. The cover was designed by Rebecca Billy, an Arkansas-based artist hired by my publisher.

How do you come up with characters names and place names in your books?
Character names tend to serve a thematic purpose in my books. For example, there are several different characters in TARBABIES named Tony, because my lead character is a bit of a social recluse, and has a hard time remembering his neighbors’ names. I try to avoid hitting the reader over the head with allegory, though. This isn’t Pilgrim’s Progress.

Do you decide on character traits (ie shy, quiet, tomboy girl) before writing the whole book or as you go along?
Every character I introduce tends to serve a specific purpose, so their base personalities are geared toward what I need them to do. Inevitably, however, the little buggers end up writing themselves.

Do you basic plot/plan for your book, before you actually begin writing it out? Or do you let the writing flow and see where it takes the story?
Story is key for me. I know exactly where I want the characters to end up before I start writing a word. However, it’s not unusual for a better idea to strike me as I’m going along.

How do you market/promote your books?
So far, I’ve been spending a lot of time trying to develop word of mouth. With a small publisher and a niche genre, getting real people to back your product is essential.

What do you do to unwind and relax? Do you have a hobby?
I live in prime hiking country, so any weekend day with even remotely tolerable weather will find my wife and I chasing our dogs through the Catskills.

Is there a certain Author that influenced you in writing?
Both Christopher Moore and Terry Pratchett have been enormous influences for me. They’ve persuaded me that it’s OK to have fun with even the most serious of topics.

Do you think ebooks will ever totally replace printed books?
Almost certainly, and it may very well happen during our lifetimes. The ease of consuming digital content on portable devices is quickly overcoming whatever nostalgia remains for traditional media formats.

Do you think children at schools these days are encouraged enough to read? and/or do Imaginative writing?
When I go into those few bookstores that remain in my area, I typically find that well over half the floor space is dedicated to children’s or young adult literature. I’m not worried about the kids. It’s the adults I know who don’t read enough.

Do you have a favourite genre of book?
I’ve got a soft spot for horror that I don’t ever see going away.

What piece of advice would you give to a new writer?
Don’t listen to advice. None of us have a clue as to what we’re doing.