The Blue River Wolves is a series of short stories 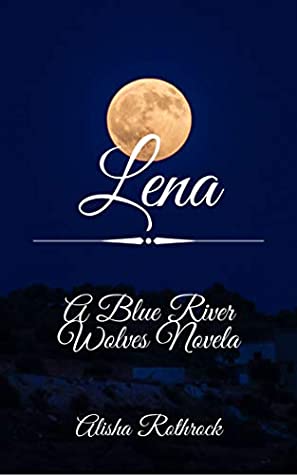 BLURB from Goodreads
Lena was forced to run from her pack as a child. Living in hiding isn't easy, especially when you have to go to a public high school. The Blue River pack wants her dead, she is being stalked by a blue-eyed stranger, and her only friend so far turns out to be her stalker's little sister. What's a werewolf on the run to do? Will Lena escape her past free and clear, or fall in love with the enemy?

I almost overlooked this book, but there was something about the simplicity of the cover that made me pause and want to know a bit more about the book. As soon as I read the blurb, I decided it was something I wanted to read. The genre’s listed for this book are YA, Shifter which fit the book perfectly, but I would add though I am most certainly not within the YA age bracket I still read and really enjoyed it.

The book begins with a prologue which is set in the present where Lena is looking out of her window and see’s a boy with strangely beautiful but eery blue eyes loitering at the very edge of the yard. It makes Lena feel uncomfortable, and she wonders if those she is running from may have caught up with her. Lena then goes to sleep and through her dream the book goes back to the past, and the last words her and her mother spoke to each other. Lena’s parents sent her away with her Nanny during an unsettled time in the pack she was part of. There was a high probability if Nanny had not gone on the run with Lena she would have been killed.

The following day when Lena goes to school, being the new girl means she has to go through the usual embarrassment of standing up, stating her name and a bit about herself. Lena refers to her Nanny as her Aunt and reels off her practiced cover story. Later in the day she see’s the mysterious boy that had been on the edges of her yard. Obviously, this panics Lena and she runs into the nearest girl’s bathroom. It is there she meets and makes her first friend Anastasia who invites her to sit and each lunch with her. Lena is in for a bit of a surprise when she finds out the mysterious boy with the eerily beautiful blue eyes is Ana’s brother Damon.
Things become even stranger when it is revealed they are both part of the Blue River pack, the very pack who Lena is running from. There should be animosity between them but they become firm friends before their true identities are revealed. So do Lena’s new friends mean to harm her, or return her to the evil man now in charge of the Blue River pack. The same man that killed her parents in his bid to take over the pack as alpha.

My favourite character if I had to pick only one, is a difficult decision as they are all well written interesting characters in their own right. However, maybe it’s because I am an older reader that I loved “Nanny” I think she has much more to her and hopefully it will all be revealed as the novella’s continue. I’d love to know more about her life before she was Nanny to Lena. It seems she was very good friends with Lena’s parents for them to trust her with their daughter’s life and safety.

I can see the beginnings of a romance between Lena and Damon, I think the moment she set eyes on him she knew he was more than just a boy hanging around her yard. Ana seems quite pleased about the possibility of her new best friend and brother “dating” but could there be a little jealousy lurking as it has always been her and Damon together, protecting each other from their father Zane. We don’t see much of Zane in this novella but I am sure he will feature more as the series continues, and I really think I am going to enjoy continuing to hate his character and what he does.
Looking forward I could see a happy ending that would suit Lena as much as it would suit Damon & Ana, but I can see lots of twists and turns ahead before any of that can possibly happen.

My immediate thoughts upon finishing this novella were, wow I finished it in one reading session! I have fallen in love with the main characters of Lena, Nanny, Ana & Damon already. I also have a feeling I am going to continue to enjoy hating Zane. Looking forward to reading the next novella very soon, in fact it is bought & downloaded ready to read straightaway.

So, to sum up I really enjoyed this book, I think it is going to become even better as it continues too. I definitely recommend reading it. The writing style makes it easy to read and the pace of the book made it a fast read for me. It left me wanting more of the series straightaway. I would compare it to the Knights Academy by Emerald Barnes, which I love.