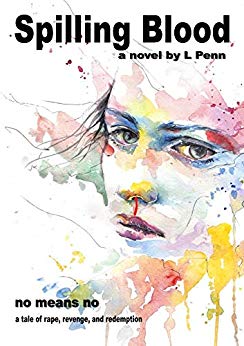 BLURB from Goodreads
When schoolgirl Toni Simms is horrifically betrayed by her boyfriend David Hilton, she enters a world of bloody revenge.As her best friend Rebecca Hayes comes under attack, they decide to take the law in to their own hands with events leaving a trail of untold plight.Left physically and mentally broken, each girl discovers emotions and thoughts they would not have believed possible, rearing unbridled acts of attrition as secrets are revealed surrounding family and school life.Toni and Rebecca cross boundaries no teenagers should cross, and walk a path only they understand, even accepting their lives, will never be the same again.

EXCERPT
Smart heeled boots pounded hard pavements soon hit softer ground as they reached the park. For late morning it bore empty. Those who used it to organise school quicker were already there, and the dawn few who walked dogs had come and gone before the two friends surfaced from a beaten footpath to look over their shoulders and see David trip, pick himself up, and go after them even faster.
“This way!” hailed Toni, smartly cutting round a small brick building in to crammed bushes and long thick grass.
Staying low whilst moving quiet, they anticipated David’s follow but did not expect him to come from the opposite direction and cut them off halting Toni in her tracks thus causing Rebecca to cannon in to the back of her.
The two stood breathing hard watching David breathing hard and pointing at Toni.
“What are you running for?” he said contentiously, “I waited for you yesterday, where the hell were you?”
She found herself shaken by his words. Does he not remember what he did?
“You know we always meet up at six, where the hell were you, Toni?”
She stood astonished.
“I said, where were you, I waited for you, I could have been with my bloody mates?!”
She swallowed strong, trying not to believe this moment, trying not to believe him.
“What have you got to say to me?”
Her legs swaddled derelict because if he got any closer, it spelled her collapse. She opened her mouth to say something, shout, swear, berate him, anything to give him the message they were through however Rebecca dived first, and what she said brought no respite to their unforgiving plight.
“You’ve got some nerve, why don’t you leave her alone?”
He mushroomed the friend his eyes. “Are you asking me or telling me, Hayes?”
Anger and disgust could not be disguised, “I’m telling you,” she said vividly, “I’m telling you to leave Toni alone, okay!”

I’m author, L Penn, telling you a bit about me and my thought-provoking novel, Spilling Blood.


Born in Leicestershire, UK, I began writing in the 80’s bashing away at keyboards on an old typewriter creating stories which challenged the norm. I’m a writer of books that “grab you by the throat and sling you up against the wall”, as one reviewer put it about my second novel, Missing Him: A real love story.

Never one for run-of-the-mill fiction, I pen books with burning passion as you can gather from my contentious storylines. I finished my first feature aged 15 and continued writing till I turned 24, then fell away with life at my heels only to resurge decades later; hence a refreshed, Spilling Blood.

I won’t preach about writing or how to do it art but if you’ve got a story to tell then tell it well. Read it over and over and visit it again weeks later because only you will know if you’ve got it right.

I enjoy works which feature smart, unconventional females and during the 80’s, my mum’s best friend Shirley (who sadly passed of cancer), showed grit and determination during heavily prejudiced times. She placed herself above the parapet challenging anything unjust, so I watched and I listened.

Everybody needs a shoulder to cry on but if there isn’t one available, then create characters on whose shoulders you can.

Hoping I did that with Spilling Blood, it’s a book for readers prepared to step out of their comfort zones and discover an emotive ride. So, for a brave story that doesn’t pull any punches, let protagonists Toni and Rebecca become your characters and experience the shocking journey they take you on.

Thanks for sharing, and happy reads everyone!

Could you tell us a little bit about your book, Spilling Blood (in 20 words or less)?
Spilling Blood is a challenging story of abuse and revenge where victims take back control of their lives.

How did you get your ideas for Spilling Blood?
I’d read about crimes where perpetrators weren’t being punished and thought, what if victims took the law in to their own hands?

How long did it take you to write Spilling Blood?
It took me around ten months between finishing my full-time bricklaying apprenticeship (back in 1989) and writing at weekends.

Did you have to do a lot of research for Spilling Blood?
To be honest, no. I’m the kind of writer who imagines characters in a setting and after scribbling a few pages the story takes off. I didn’t plot Spilling, it wrote itself, which is why I think it’s such a powerful book.

Have you based any of the book characters on people you know?
I’m happy to say I didn’t due to the nature of the story yet I feel the characters are people we all know.

What can we expect from you next and in the future?
My next book is about a female bouncer which I’m currently editing and you can expect more hard-hitting stories of everyday people overcoming adversity.