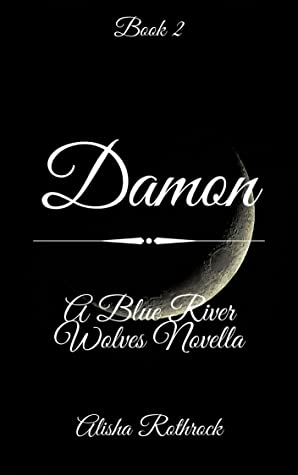 BLURB from Goodreads
Damon is in a tight spot and he knows it. On the run with his sister Anastasia, the crafty old wolf Nanny, and the rightful Alpha of the Blue River Pack Lena, he now has to get everyone ready for the battle that lies ahead. It's not going to be easy to stay off the radar and train two teenage girls how to fight like a wolf. New feelings crop up almost as often as new dangers, and time is running out. Betrayal and old secrets threaten everything as their ragtag group tries to stay hidden, and alive.


After reading Lena I immediately looked up what the next novella was called and when I could read it, so when I discovered it was already available, I purchased straight away and started reading. I found that I slipped right back into the world and the adoring budding relationship between Damon and Lena. There is even a “chemistry” between their wolf parts, Cane and Serlida. It’s so cute and totally believable how Ana and Nanny tease the pair. I also enjoyed the internal conversations between Damon and his wolf Cane. I found it amusing how Lena is at first shocked by her wolf Serlida, talking to her inside her head and then when she changes form, she is still a little surprised that she can hear Damon in both his human and wolf form inside her head too.

We learn more about Nanny in this book though there is still an air of mystery around her. Damon is continually shocked yet impressed by how organised and prepared Nanny is with multiple sets of clothes not only for herself & Lena but for him and his sister Ana too. Damon is totally impressed the way Nanny has pre-empted certain situations and the fact they would need to disappear quickly. Nanny immediately sorts out a winding route to hopefully put off anyone following them. She also has new documents in different names for each of them so they do not leave a paper trail. Nanny decides it is time to educate Lena more about her other side, which involves her shifting to wolf form and back to human form with control and speed. They also need to teach her endurance, fitness and fighting, as by now they have all come to realise that there will be a fight of some sort at some point soon. They need to be as ready as they can be. Damon and Ana know that their father will be ruthless as much towards them as he will be with Lena & Nanny. There’s a rather big revelation about Nanny’s past which would be a huge spoiler if I revealed it, so I won’t just that its one of those “oh wow, really?” moments. Finally, after training hard and it being Lena’s birthday, Nanny decides they have all earned a visit into the local town. It’s whilst there that the group separates and Damon goes into a store to buy a gift for Lena that he meets someone who not only knows what he is, but who he is. This mysterious woman helps him find the perfect gift but also gives him a vague message to give to Nanny, who is clearly shocked and a little shaken by the fact this person now knows where they are. It means trouble may be heading towards them a little faster than they thought. Someone else makes a mistake of trying to contact the pack hoping to boost their numbers when it comes to the inevitable battle. Sadly, it doesn’t work out as they thought.

My immediate thoughts upon finishing this novella were, Wow, what a place to stop! What a cliff-hanger! I really hope Nanny survives to meet back up with Lena & Damon. Why did Ana run off? I think Nanny, Lena & Damon would have forgiven her mistake. Oh, when can I read more??

To sum up, really, really enjoying this series and looking forward to reading more of it as soon as I can. As each of the novella’s so far have been named after one of the main characters, will that pattern continue and whose turn is it next, Ana or Nanny? A truly captivating series for YA readers and Shifter lovers too.