REVIEW - RECKONING - AFTER THE THAW BY TAMAR SLOAN & HEIDI CATHERINE 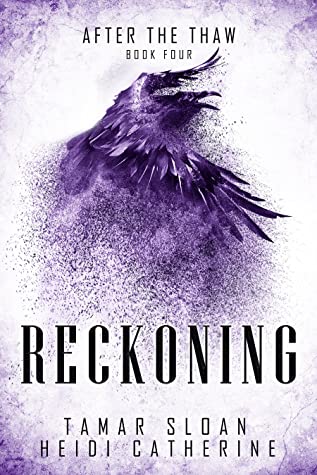 BLURB from Goodreads
Only the chosen shall breed.Nova, Kian, Dex, and Wren.Four teens reunited, only to discover their world has been torn apart.Askala has been seized by a new order. A cruel army that rules with greed and fear. An army that seems impossible to defeat.Forced into the forest, the people struggle to survive using all they’ve learned from the harshness of the Outlands. Bound, Unbound and Remnant alike are going to have to create unity in a world founded on division if they are to win.Will they discover a way to carve a better path for the future? A future about more than just fighting to survive. A future where all can thrive, not just the chosen few.In the greatest battle for Askala yet, sides will be chosen and loyalty will be tested. Is it possible that love and intelligence were the key all along?

After reading the prequel Burning, I had a good idea I would be wanting to read this whole series to the very end so after finishing Falling I was desperate to read this one Reckoning. I have to say I think all these books have very apt titles that fit the individual places the books are within the whole series, story. I also love each and every cover in this series so far too.

Reckoning picks up right where Falling left off, its literally like flicking over the page within the story as it continues. I really can’t avoid a spoiler here so if you haven’t read up to the ending of Falling please stop reading this review now! At the end of Falling, Wren was chosen to go inside of the lab to Dex despite knowing her father intended on killing everyone that had disagreed and refused to declare themselves followers of Ronan/Cy. Wren has never been so scared for her life, yet at the same time she doesn’t regret coming into the lab to be with Dex, even though it looks like she is going to die with him. Again, a bit spoilery, but with help from Phoenix, Kian and Nova first Wren, then other Askalan’s are rescued from the lab inferno. Dex brining up the rear with the precious laptop that contains all the ancesteral Askalan information. Sadly a few people refuse to trust that there is a way out of the burning lab and perish. Wren finds it difficult to come to terms with the fact her father Ronan/Cy allowed her to perish in a fire he started. The lab survivors are ushered to the forest to hideaway from Cy and his men. Wren and Phoenix are re-introduced to Avis and it goes better for one of the siblings than the other. Sadly Wren decides the only way forward, to get inside information on Cy and his men is to go back and pretend she is sorry. Unfortunately it turns out that Wren doesn’t know her father quite as well as she thought and is put through a gruesome punishment that ensures she will never forget her fathers treatment of her again. Cy also announces that she is going to produce an heir for him. He demands she be paired up with one of his trusted men and give him a grandson. At least there is a little luck left for Wren when she is paired with a fairly decent man who doesn’t wholly agree with Cy’s treatment of Wren or the Askalan people. Just when you think all is lost and the Alaskan natives have no chance at all against Cy’s men and their flamethrowers, help arrives in the form of Dean and his new Outlander army. Dean and his men can fight and will be an asset but what will they want in return for their “help”? Phoenix helps to “train” the Askalan people as best he can with people that have never been, nor wish to be violent towards others.

I won’t go into further detail or spoilers but there is a lot going on in this book. The person who maimed Dex and killed Mercy is revealed along with the reason they did it which has both devastating and drastic consequences. Magnus once the strength of Askala makes a strange choice that his son, Kian, struggles to come to terms with.
A lot of parent/child relationships dramatically change, with both Phoenix and Wren being shocked by how harsh their father Cy can and has been in the past, but when it comes to his life or death what do his children do? Phoenix and Wren also have totally different feelings and attitudes when they meet Avis a face from their past. Phoenix seems to be the one that adapts much quicker to changes where as Wren is much slower at realising the truth of the past and coming around to forgiveness. Both Avis and Wren end up having to face their deepest fears.

I’m not sure how to explain it other than to say this series is really deep, and multi layered, and there similarities that happen within each different generation, for example, earlier in the series there is the relationship between Magnus and Callix who both work for what they believe is the right thing for Askala. Though when it comes down to it the High Bound and the High Bound Leader Magnus has the largest influence. Also Magnus and Callix are positive and are cautious, whereas Ronan who is banished and later changes his name is a negative, impulsive person who puts everyone in danger. Then later in the series and in this book there is a similar relationship between Kian and Dex, however Kian listens more to the opinions of others than Magnus ever did. Where Magnus is all about the good of Askala no matter the cost, Kian is more concerned about the people of Askala and their survival, as without the people there is no Askala. Both Kian and Dex are positive influencers on Askala and it future, where Dean a relative of Ronan is the more negative impulsive person, who acts first and thinks later.

My immediate thoughts upon finishing this book was another great book in the amazing After The Thaw series. What will the future bring for Luca, Hawk, Sam, Mercy, Robin and Dove? What dangers will they have to face? The earth seems to be regenerating and finding a way to renew itself and become better but will all humans renew their outlook? Will they want to work hard and live in peace? Or will there still be humans who turn up to threaten the peace of Askala and its people?

To sum up once again I thoroughly enjoyed this book, though at first it had a “different” feel to it, but I quickly slipped back into the world with the great characters. The only thing I kind of would have changed was we didn’t have the “Five Years later” section at the end of this book I think I maybe would have preferred it at the beginning of the next book. Having said that I adore this series and am looking forward to seeing what direction the Askalan’s will be heading next.