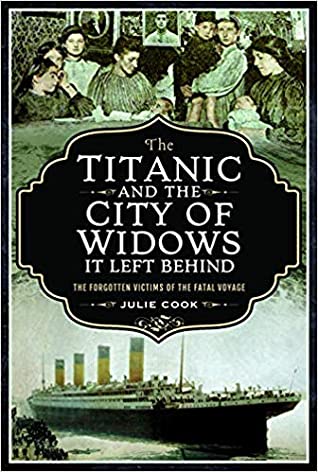 BLURB from Goodreads
When Titanic foundered in April 1912, the world's focus was on the tragedy of the passengers who lost their lives. Ever since, in films, dramatisations, adaptations and books, the focus has mostly continued to be on the ones who died._The Titanic and the City of Widows it Left Behind_ focuses on another group of people - the widows and children of the crew who perished on board.Author Julie Cook's great-grandfather was a stoker who died on Titanic. Her great-grandmother had to raise five children with no breadwinner.This book focuses on Emily and the widows like her who had to fight for survival through great hardship, whilst still grieving for the men they loved who'd died on the ship. Using original archive sources and with accounts from descendants of crew who also lost their lives, the book asks how these women survived through abject poverty and grief - and why their voices have been silent for so long.


I find the era around the Titanic being built and the tragedy of it fascinating. The way it was called “The Ship Of Dreams”, the films that have been made about it all add to its draw to learn more about. Though I have to be honest in that although I have thought about those whose family did not survive and return home. I hadn’t purposely sought out any of their specific stories to read. As the author Julie Cook says in her blurb for this book the films, and both factual and fictional stories all seem to be centred on those wealthy passengers that were on the ship.

As you will notice I have a specific page where I list books about the Titanic both fiction and non-fiction, so I have read quite a few books but am always on the look out for others. More recently I have turned to reading more non-fiction titles about the eras of history I find interesting. As soon as I discovered this one on Pen & Swords website, I knew I had to buy and was really eager to read it. I was intrigued even more by the fact this book centres on the widows and children of the those that perished the night the Titanic sank. The fact that the author Julie Cook is a relative of someone who died on the Titanic makes this book all the more poignant to read.

Julie Cook’s great-grandfather, William Edward Bessant, by a quirk of “luck” he ended up being a stoker on the Titanic. A group of workers from Belfast had failed to turn up for their jobs after a disagreement about safety issues on the Titanic. William managed to get one of these “spare” jobs. Even though it meant leaving his family it wasn’t the first time William had done this type of job. As a family it would have been viewed as something positive as it meant a stable income for a while.

Julie, the author has spoken to her Aunt Doreen, William’s daughter about what she can remember too. William’s job was to stoke the fires and shovel coal into the furnaces that fuelled the ship. The men that did these jobs worked long hard hours, and were considered stoical and hard. They were known as the “Black Gang” as they were always covered in soot and coal and were considered the lowliest workers on the grand ship. Sadly, as they worked in the lowest part of the ship it meant they were the furthest away from the deck and life boats. As Julie’s father told her, “it was working class muscle that kept the Titanic sailing”. No one knows what happened to the then forty-year old William Edward Bessant’s body, it was never recovered. William’s wife Emily at just thirty-eight years old became a widow and was just told William had been “lost at sea”. Emily was left alone with five children, three of which were under six years old. William had been the breadwinner in the family, as the male in the household usually was at the time. At the Sea City Museum in Southampton’s Titanic exhibition there is a wall dedicated to the memories of the crew members. Unfortunately, there isn’t even a photograph of William Bessant.

As in most families, stories are handed down generation to generation, Julie reveals there was a story told that during the turmoil on the Titanic a gentleman passenger whom William assisted to the lifeboats, wrote down William’s address and promised to help his family when he returned to Britain. Apparently, William’s twelve-year old daughter, Gladys, was offered a private education, fully funded by this gentleman.
Julie has managed to speak to the relatives of others that were lost at sea and also those whose relatives survived too. There are so many scenarios about what could have happened to William and why he didn’t survive.  Other make crew members survived as they were put on the lifeboats containing women and children to row them to safety. Julie has managed to piece together what shift her great grandfather was on and has an idea roughly where he would have been at the time of the collision with the iceberg.

Julie’s research found that Walter Francis Fredericks was on the same shift pattern as her ancestor William. Walter made it to the top of the ship and was ordered to by officers to row the lifeboat. Walter did this and he survived as did those also on that lifeboat. I certainly agree with Julie and her research which showed that the world’s sympathy at the time and even now when the Titanic story is re-told. was aimed towards the passengers such as Benjamin Guggenheim, and John Jacob Astor who both went down with the ship and portrayed as heroes. I have also heard the story of the strong minded “Unsinkable Molly Brown” who survived in a lifeboat. I also remember the tales I have read about the ships band and how it continued playing “Nearer My God To Thee” as the great ship sank. I totally agree with Julie that you never seem to see, in movies or TV shows, or read the stories of those family members of the lost crew such as her great-grandmother Emily.

I found the book intriguing, to learn how the families of the missing crew were left with very little information. Expected to just accept the “lost at sea” explanation. Julie reveals how bodies that were retrieved were buried in various places, some of the crew and/or lower-class passengers were left as “lost at sea” yet the bodies of the rich were retrieved, embalmed and brought home for proper burial. It was interesting to read about the formation and workings of the Titanic disaster relief fund. These payments were scaled and based on job of the crew member that died. The widows received their amount of money and there was money paid for each child until they “came of age” which was 18 for girls and 16 for boys. A woman was employed and referred to as the “lady visitor” who would call on all the families to make sure that the children were being cared for correctly, the houses were being kept clean and tidy and that the women were acting appropriately. If a Titanic Widow remarried, she lost her Titanic Relief Fund money immediately.

I could honestly go on and on about this book it covers so much. The poor crew lost at sea, those that made it home but felt guilt at surviving when his neighbours didn’t. It does make you wonder why there was never a film made about the families left behind without their fathers, brothers, or sons.

My immediate thoughts upon finishing reading this book were that it was an
amazing, poignant, emotional and powerful book about those women & children that were left behind by their men who died on board the Titanic. Also tells the story of those few male crew members that survived and the stigma that stayed firmly attached to them until the day they died, despite being heroic and following orders to row life boats of passengers away from the sinking Titanic.

To sum up, it is a sad tale but at the same time it’s an uplifting story as Emily Bessant may have lost her husband and the breadwinner of the family the night the Titanic sank, and she never got a body to bury and visit with flowers, but she didn’t let this totally break her family. I believe she quite literally took it on the chin and got on with life. Emily had to, she had those children to bring up and provide for.