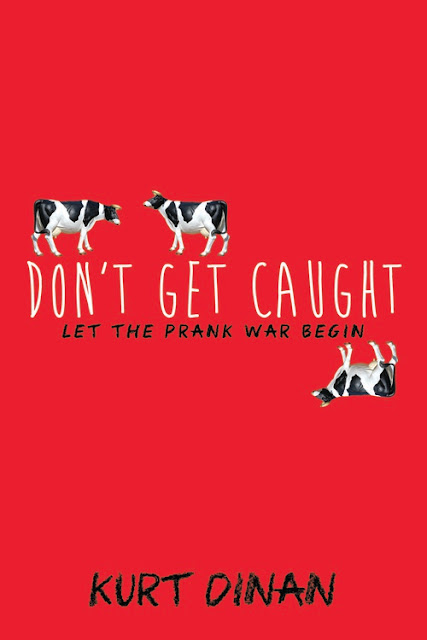 BLURB supplied by Sourcebooks
10:00 tonight at the water tower.  Tell no one.   —Chaos Club

When Max receives a mysterious invite from the untraceable, epic prank-pulling Chaos Club, he has to ask: why him? After all, he’s Mr. 2.5 GPA, Mr. No Social Life. He’s Just Max. And his favorite heist movies have taught him this situation calls for Rule #4: Be suspicious. But it’s also his one shot to leave Just Max in the dust…

Yeah, not so much. Max and four fellow students—who also received invites—are standing on the newly defaced water tower when campus security “catches” them. Definitely a setup. And this time, Max has had enough. It’s time for Rule #7: Always get payback.

Let the prank war begin.
Oceans 11 meets The Breakfast Club in this entertaining, fast-paced debut filled with pranks and cons that will keep readers on their toes, never sure who’s pulling the strings or what’s coming next. 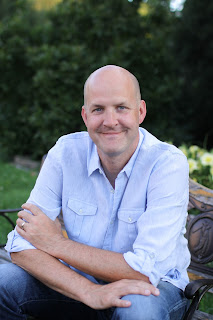 Kurt Dinan has taught high school English for over twenty-one years, and while he’s never pulled any of the pranks detailed in this novel, he was once almost arrested in college for blizzarding the campus with fliers promoting a fake concert. He lives and works in the suburbs of Cincinnati with his wife and his four children he affectionately refers to as “the Crime Spree.” Don’t Get Caught is his first novel.

EXCERPT
Ellie calls it Operation Stranko Caper and gives each member of the Water Tower Five code names related to his or her role.
Adleta is Goon.
Malone is Shadow.
Wheeler is Potatoes.
Ellie is Crybaby.
And I’m Bleeder.
But at the moment, waiting for zero hour while standing in the back hallway where I can view the filled cafeteria, I’m feeling more like Puker because I want to sprint to the bathroom to vomit up my guts.
And to think this was all my idea. Here’s Heist Planning 101:
1.Identify your target. In this case, the target is Stranko’s phone. Clearly he’s investigating the Chaos Club; the pictures he took in the office prove that. Who knows what other evidence against them he might have?
2.Formulate a plan. It took a week of observing Stranko during school (all of us) and after (thank you, Adleta)  to realize he’s most separated from his phone during lunch duty. It sits on a table on the stage next to where Stranko polices the cafeteria. Now, if he were to be pulled away from the stage...
3.      Practice, practice, practice. The five of us rehearsed our roles for over a week. The plan isn’t the most complicated, but we only have one shot at Stranko’s phone.
Our final run-through of the plan lasted two hours on Saturday, with Ellie and Wheeler the most excited. Even Adleta, who’s probably risking at least a thousand push-ups every day for the rest of his life, liked the idea. Malone, go figure, predicted failure.
“It won’t work,” she said. “Maybe in a movie, yes, but not in real life it won’t.”
“No, they won’t see it coming,” I said. “No one expects things like this to happen, and especially not from us. We’re trying to stay out of trouble, remember? Why would we risk getting suspended?”
“Max is right,” Adleta said. “There’ll be too much going on for Stranko to realize what’s happened. It’s going to work.”
“What if we get caught?”
“Then we do what you should do whenever you get busted,” Wheeler said. “We lie our asses off.”
I don’t mind Malone’s concerns. In fact, I appreciate them. The more I’m around her, the more I depend on her skepticism. Every heist crew needs someone to point out the weaknesses in a plan. Malone’s perfect for that. She’s also tech savvy, a brilliant artist, and athletic as hell. A jack-of-all-trades, really. Or more like a jill-of-all-trades.
A heist can go wrong for any number of reasons, the worst of which is the double cross. You can just never be sure if everyone is really on your side or if they’re working an angle. I don’t necessarily think anyone in my crew is behind the setup at the water tower, but the hint of doubt is there. Still, why would someone set us up to get busted and include him or herself in the busting? It makes no sense.
We picked Monday for our heist because that’s the school day where everyone, even the administration, just slogs through until the final bell. At the time I was excited, but now it’s nausea city. Reality sucks that way. But I’m not going to back down and hide in the theater again like I did the day after the water tower. Not that I could put a stop to our plan if I wanted to. Everyone’s in position. The pin’s pulled and the grenade heaved. All I can do is try not to get my head blown off.
On stage, Stranko reads something on his phone, then places it on the table beside him before returning to his surveillance. In a lot of ways, thinking of him as a prison guard is dead-on. The entire building is a prison, with the staff as guards, students as prisoners, and rules that dictate when we can stand up and leave, talk, and even go the to the bathroom. The school even has security cameras, which are positioned in all corners of the cafeteria. I’ve seen the room with the video monitors though and am not as worried as I might be in a newer school. The monitors here are in black and white and the images almost blurry, like it may be the first security system ever created, maybe used back in the Garden of Eden where God watched a grainy image of Eve heisting that apple.
Then, right on cue at 11:45, Crybaby, sitting at her usual table near the front of the cafeteria, pushes her tray aside and puts her head down in her arms.
Step One, the Split, has begun.