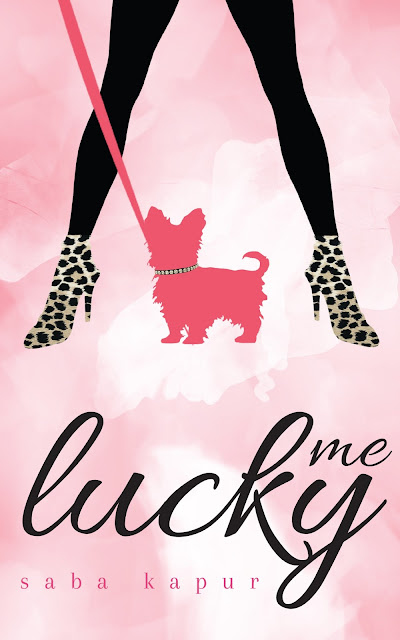 BLURB supplied by PR By The Book
For eighteen year old Gia Winters, having a movie star for a father, a former Playboy bunny as a mother, a Hollywood mansion, and a closet stocked with Chanel is simply another day in the life.But her world is turned upside down when her father mysteriously hires a group of bodyguards to trail the family 24/7 and threatening phone calls from a "Dr. D" start buzzing daily.When Gia scores the coveted role of Miss Golden Globe, she is forced to strike a deal with her bodyguard, Jack, who is almost as arrogant as he is attractive. Juggling Gia's romantic failures, fashion faux pas, and celebrity obsessions, the duo investigate a series of clues with the help of a police cadet, who has a special set of skills and an even better set of dimples.But with the Golden Globes just around the corner, danger levels rise higher than her stilettos as Gia learns that the biggest secrets might be the ones buried in her own home.In a place where the hills have eyes, high school nemeses, bad hair days, raging parties, and stolen kisses, there can only be trouble for a girl who was just starting to consider herself lucky.

What inspired you to write Lucky Me? Where were you when the idea came to you? When did you decide to write it?
The idea for Lucky Me actually came to me in the shower! I was in tenth grade, and had been spending a lot of time in the library. High school drama was at its peak, and I found my solace amongst books. I think that’s where most of my urge to write came from. This idea just popped into my head and I typed up a rough first chapter, and decided to continue from there. I never wrote it with the intention of having it published; it was initially just a hobby. The idea for the book developed from various places. I had noticed that, particularly amongst my generation, the focus on young celebrities was growing in Hollywood, which really intrigued me. I wanted to write something that was funny but also had an element of mystery, as those are my favourite kinds of books to read.

What research did you do for the book? Did anything about your research surprise you?
My research was mostly regarding the protagonist, Gia. I wanted to make her character as authentic as I could, so I did a lot of online research on young stars, and the children of celebrities. I particularly researched teenage stars who are idolized by girls my age, such as Kendall and Kylie Jenner, or Gigi Hadid, to name a few. In my research, I also came across many videos of young celebrity children, e.g. Suri Cruise, and their interactions with the paparazzi. I was surprised to see how aggressive the media can be with kids, and tried to incorporate some of those feelings into Gia’s own experiences of the paparazzi. I also did a little research on Hollywood, UCLA and Los Angeles in general, as I’ve never actually been there! I wanted to make sure it was accurate.

How did social media research inform Lucky Me? Did you find it difficult to translate social media research to different aspects of the book or did you fit them easily into the characters, plot etc? What was this process like?
Social media was a huge part of my research for Gia. Because I was basing her personality traits and lifestyle of young celebrities, it was easy to access information through social media sites, because of how popular they are amongst millenials. In particular, Instagram, Tumblr and Twitter were sites that I found to be most insightful. It gave me a great idea of the brands/fashion that are most popular amongst young celebrities, and the mass following they hold online.

How did your love for fashion influence the characters and story?
Fashion is something that I’ve always been interested in, and because of the setting of the novel, it was easy to incorporate it throughout the book. There is no singular definition of fashion, and I love that it’s so subjective and fluid, because it allows you so much opportunity for fun and creativity. I tried to integrate this sentiment into Gia’s personality, but of course tailored (no pun intended) to suit her lifestyle. The importance of looking good is extremely influential amongst my generation, especially with young celebrities as role models. I felt that Gia would be incomplete or unauthentic without including her love for fashion.

What was your writing process like? Did you know the entire plot of the story before you began or did you come up with it as you wrote it?
When I began writing the book, I had very little of the story worked out in my head. Many of the characters, such as Milo, were a result of impromptu decisions while writing a chapter! But because I began writing the book when I was so young, overtime my writing style matured, and I wasn’t happy with the story. I must have rewritten the plot a million times before settling on the final draft! I was very reliant on my sister and my friends during this time, as they really helped me shape the story with more clarity and finesse.

You’re studying International Relations in school to become a lawyer. Did you always want to be a writer as well?
My older sister was always the writer in the family, so it came as a surprise when I suddenly announced that I was writing a novel! I had written a few short stories when I was younger, but I had never really had the intention of pursuing a career in writing. International Relations and Criminology were my main areas of interest, whereas I always considered my writing to be a branch of my love for reading books. It wasn’t until the end of high school, when I decided to try my luck with publishing that I began to actually view writing as something else. Even now, I still find it hard to call myself an author. But my relationship with writing has definitely become more meaningful.

Did you base Gia’s character off of anyone in particular? Gia is a product of many influences. I tried to develop her as a combination of some of real-life celebrities and my favourite female characters, taking a few personality traits from each one. Gia definitely has elements of Cher Horowtiz (from one of my favourite movies, Clueless) with her love for fashion, and Blair Waldorf (from the books and TV show, Gossip Girl) who I spent most of high school pretending to be! In reality, Gia is really a heightened depiction of my own personality. We are different in so many ways (namely, I don’t make as many poor life choices and do not own a single pair of Louboutins). But we are very similar through our sarcastic and witty personalities. Gia also shares my love for Audrey Hepburn, who I have idolized ever since watching Breakfast at Tiffany’s, in seventh grade.

Who would you imagine Gia’s celebrity best friends (squad) would be?
I think in reality, Gia would hate to be friends with young models; purely because she’d be worried they were prettier than her. Maybe Gia would be lucky enough to join Taylor Swift’s squad, which seems like a lot of fun. She would probably befriend someone fashionable but also fun, like Selena Gomez. But truthfully I’m only saying that for selfish reasons (I’m secretly hoping Selena wants to be my best friend).

What are your favorite parts about Hollywood culture?
The best part about Hollywood is the grandeur. Everything about it is bold, dramatic and seemingly unattainable. Even with all the over-night stars, Hollywood still feels like an exclusive club, which everyone wants to be a member of. I think my great appreciation for watching movies has made me so fascinated with the intricate processes that go behind stardom and fame. Most importantly, it’s the industry that gave the world George Clooney. We are forever indebted for that.

Did you write anything (character or side plot) that didn’t wind up in the final version of the book?
The Golden Globe awards weren’t included in my first few drafts of the book. It wasn’t until my sister suggested that I research “Miss Golden Globe” that the idea really developed from there. I thought it was a good way to tie all the events together in a symbolic way. The characters Milo and Jack were also initially quite different to the final version. I had a lot of fun experimenting with their personalities during the many draft edits.

What authors do you look up to and why?
This may sound a little clichéd, but I try and learn something from every book I read. If there’s a particular writing style I like, I try to incorporate it into my own writing. I have such respect for so many authors, particularly those who write in my preferred genre, such as Meg Cabot, Janet Evanovich and Sophie Kinsella. They have completely mastered the art of mystery, humour and romance.
What are your favorite books? In what ways have they influenced your writing?
It’s a little ironic that I couldn’t even get through a novel without giving up out of boredom, until about sixth grade. I truly owe J.K. Rowling a lot, as Harry Potter was probably the first series of books that I decided were just too good to give up on. Janet Evanovich, Meg Cabot and Sophie Kinsella are the authors who have had most influence over shaping my writing style. Every time I read one of their novels, it really motivates me to make my writing as endearing as theirs. That being said, my favourite book of all time is The Godfather, by Mario Puzo. It’s my father’s favourite book, so it’s extra special to me that we can share our appreciation for the story.


If you could have dinner with any fictional book characters, who would you choose and why?
Michael Corleone (from The Godfather) would probably be on the top of that list, and not just because Al Pacino was ridiculously attractive back in the day. He is someone who commands so much respect through the page, which is so hard to achieve with just words. Michael Corleone is a character that is so close to me, because I feel like so many of my own characteristics are depicted in his personality (minus the Mafia murders of course). He is probably my favourite fictional character of all time.

Do you plan to write a sequel?
I am currently working on the sequel! Lucky Me ended with a few unanswered questions, and I just felt that I couldn’t fit it all into one book without taking away from the main story. I always intended on writing another book, and I’m having so much fun exploring what’s next in Gia’s life, now that she’s graduating from high school. I feel like the characters are growing up alongside me.

This tour was organised by
PR By The Book
Posted by Jeanz xx at 03:00