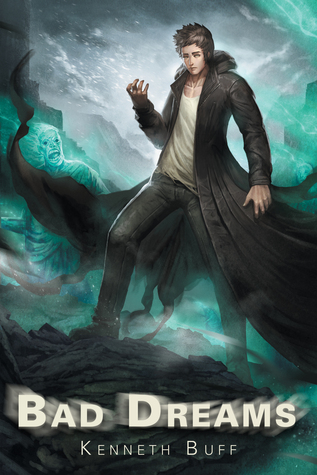 BLURB from Goodreads
We all have nightmares, but not all of us have to live them. Johnathon Clarke did. His bullies beat him. They humiliated him. They stole his life. So at the age of 17 he took it away with a bullet from a gun.In Hell John finds himself working out his existence in the mailroom, until he's given the promotion he died for—he becomes the forger of nightmares, the giver of bad dreams.With his new position, John makes his assignments feel the fear he’s felt his entire existence. He does this until he’s assigned a young girl named Danielle. Danielle’s not much younger than John was, and the circumstances surrounding why she’s been assigned are troubling. They’re troubling because he disagrees. Now John must decide between continuing this life of torture and scares, or using this dark gift for something else, something that could help this girl who needs him.

Kenneth Buff was born and raised in Wichita, Kansas. He moved to Stillwater, Oklahoma in 2007 to attend Oklahoma State University. He graduated in 2013. He currently spends his days working as an elementary special education teacher and his nights at Aspen Coffee, writing his next novel.