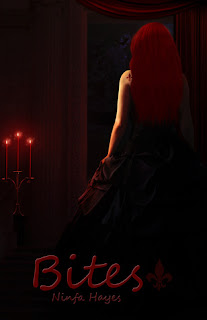 
"BITES" DEMONICA Tonight is the Midwinter Solstice Ball, the most important night in the Daemonic Court's calendar. This is the night when new disciples are chosen, when demons come out to play, and all bets are off. As it happens, tonight is also the night I become Queen. LAST OF THE BLOOD When the sweet scent reaches me I know I have found what I'm looking for. My hands reach out in the darkness to the unaware girl. She's warm and soft and doesn't even get to scream before I'm drinking deeply from her, her struggles too feeble to bother me. Only the blood counts. I've never tasted anything like it. Gloriously sweet, thick and strong and full of life. I drink until the hunger subsides, until the body that I hold so close to me hangs lifelessly in my arms. Only then I see. Only then I recognize it, and the agony ... oh, the agony is more than I can bear. BITES Irina is about to become Queen of the Daemonic Court and Damon is on the run from his own nature ... where will their paths take them? Two short stories that will seduce you with romance, danger, sensuality ... and Vampire bites.

I saw this book mentioned on facebook, then looked it up on Amazon and had to buy it for two reasons, 1 to support a fellow blogger who is now also writing and 2 Ireally fancied it from the blurb!
Demonica is about Irina a young girl who lives in Eden, with the other children of Eden. Every year there is a Midwinter Solstice Ball and on that day either a "good" Angel comes to take you to their palace or a "bad" Demon comes to collect you and take you to their palace. So obviously Irina's mother wants her daughter to be taken by the angels so imagine her shock when she answers the door to a Demon. Irina's mother cannot prevent Irina going as it is her that needs to "choose". I won't tell you anymore about the tale only say not everyone that be good/bad is good/bad (that will make sense when you read the book!)
Last Of The Blood I would liken to "Interview with a Vampire" and its very dark and gothic in its atmosphere. Its a rather complicated tale and I don't want to give too much away but a quick gist is that a man is given a choice and chooses to become a vampire, then one day does something he will regret for all his Immortal Vampire Life.

So did I enjoy the two short tales? Yes and to be totally honest I am not usually into the "Interview with a vampire" type dark, gothic tales but I really loved this one. It was well written, you could literally feel the dark atmosphere of the book. The second tale begins lighter but then takes on a darker element which I also enjoyed. Would I read any more by this author? Yes and I think that Demonica could possibly be the start of a series.