The unlikely pair thought 30,000 feet in the air was hell,
but being on the ground’s proving no better.


All they can do is stick together,
focus on whatever lies ahead of them,


and try not to die.

THIS EPISODE
This entire episode is from Rose's point of view


** Rose is intent on finding her way back to Sam, at any cost, and in doing so discovers the dark truth behind the breach. She bonds further with Nolan, despite his many walls. ** 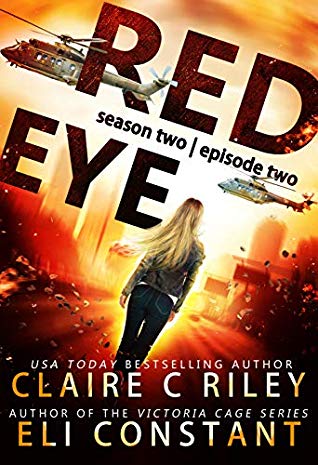 BLURB from Goodreads
When Rose and Sam find themselves in a military camp surrounded by other survivors, they have no idea that the darkest days are yet to come. Rose, feeling more homesick than ever, looks to Nolan for guidance. With her plans of seeing the world now nothing but a pipe dream and her parents likely dead, she contemplates the bleak future ahead of her. It’s getting easier to kill, but harder to hold on to hope. Sam, still in shock over the realization that she’s probably becoming the very thing she fears, seeks reassurance from Barrett—the darkly protective criminal they freed from the airport jail. The end of the world is no time for romance, but he’s not the sort of man who takes no for an answer. She’s feeling anxious, confused, and she’s got a terrible craving for red meat! People used to say when life gets tough, there’s always tomorrow. But that was before the apocalypse. Now, life is a 24-hour cycle of hard knocks and who knows if there will even be a tomorrow.

I think I have to confess to being somewhat addicted to this series of books! I buy the episodes as soon as they are available, read as soon as I can and then I am (im)patiently waiting for the next episode to be released so that I can start the process all over again! The cover is the same as for episode one and I guess it will be the cover for the whole of season two. Though I wouldn’t have called myself a zombie fiction reader/lover I do really enjoy these novellas.

The big difference about this episode is that it is solely from Rose’s point of view.

Once again there is a prologue, it begins with a medic telling the mother of a crying baby to get the baby quiet. At first an officer intervenes and tells the medic to calm down. However, it soon becomes apparent that the noise of the baby crying is attracting the zombies to them. The mother really tries her best to calm her baby down but when nothing this works the woman is told in no uncertain terms to shut the baby up or else! The prologue is a shocking, tough start to this book which has picked up in the middle of the chaos that our favourite characters were fighting their way through.
Then the story picks up in the helicopter that Nolan and Rose managed to get into. Rose is still in a daze, staring at the carnage on the ground from her place in the helicopter. It soon becomes apparent that those on the helicopter aren’t an organised escape group, as the helicopter needs fuel. . . .and soon! Rose takes this as some sort of sign that they should go back and look for Sam and Barret. Though a difficult task, Nolan explains if anyone can keep themselves alive and Sam it’s Barrett. He also indicates that Sam can take care of herself whereas Andy, who is with them now needs them much more as he is only a child, and more vulnerable despite trying to appear otherwise.

One of the army personnel on the helicopter comes up with a plan of where to re-fuel. They will also all work in pairs to collect supplies, weapons, and anything they think may be useful. There’s a rather unstable civilian called Thomas who demands a gun as he sees it as his right to be able to defend himself. Rose objects not being used to people carrying guns, and voicing her opinion that it could be dangerous arming civilians, let alone erratic behaving ones like Thomas! An argument ensues and Nolan ends up threatening to shoot Thomas himself, if he continues to threaten Rose. Things go from bad to even worse whilst the refuel is taking place with the helicopter ending up no longer being an option for escape. They need to find a form of transport and fast! There’s a gun fight with some characters being killed, others are left behind when an escape is finally made. It’s only later that Rose, Nolan and Andy find out that the army personnel were not quite s they seemed and they knew far too much detail about the zombie breach at the camp too. One of the characters who ends up tagging along with Nolan, Rose and Andy is Rees one of the army personnel, though personally I don’t think he should be trusted at all! Thankfully it turns out Nolan doesn’t wholly trust him either.

Characters I loved were of course Nolan, Rose and Andy. We see a more sensitive side of Nolan in this book, when he carries a possibly injured Rose. We also see a motherly aspect in Rose when Rees tries to give young under drinking aged Andy a can of beer. I adore the relationship between the three main characters in this episode. Even though Andy is much younger and fairly new to the group it’s clear he looks up to Nolan and is already protective of Rose. All Nolan, Rose & Andy can do it stick together and try their best to survive against the odds. They have to adapt quickly to an ever changing and increasingly dangerous situation

Characters I loved to hate were Rees, Sorel and their colleagues. You would think the zombies would be the lowest level of humans. You would think the army would be around to defend civilians. One thing you learn in this series that things are not always what they seem.. Also, to be added to the “hate” list are the medic and officer from the prologue even though I totally understand why they did what was hinted at.

My immediate thoughts upon finishing the episode were,
Oh wow! I won’t lie I had an inkling of a reservation about this all being from the POV of Rose but I honestly loved it! Though I am still holding out hope that Sam & Barrett are okay. Like Rose says on more than one occasion....if any can help Sam & survive its Barrett! Didn't think it possible but I love Nolan even more, definitely a guy you want on your side in a fight and he sounds like great book boyfriend material.

To sum up, I feel like the pace of the episode was fast, I seemed to fly through reading it! It has plenty of action, drama and danger with some great tender moments between Rose and Nolan too. I really enjoyed and I had been slightly dubious if I would enjoy this episode as much with it being from solely Rose’s point of view. However, though Sam does not feature in this episode, she is still mentioned and Rose is determined they will find each other again. As an avid reader of this series I have learnt when Rose sets her mind to something, she will do everything in her power to make it happen. Definitely looking forward to the next episode which is from the point of view of Sam. I did wonder if Sam would get her episode as Rose had one of her own too.