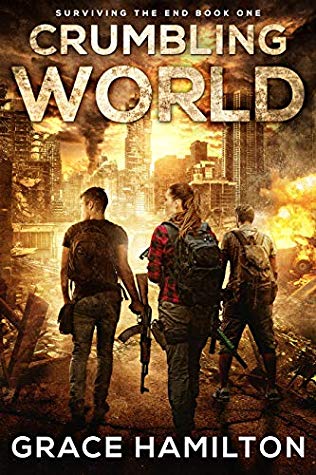 BLURB from Goodreads
Family comes first—and he’ll do whatever it takes to protect his from the looming storm.Even before becoming a husband and father, safety had been Shane McDonald’s priority for most of his forty-five years. As a nuclear engineer, it’s his responsibility to keep the Sequoyah Nuclear Plant functioning at optimum levels to avoid what protesters fear most—a meltdown.But when a coronal mass ejection from the sun wipes out power across the globe, stopping a nuclear chain reaction is no longer his primary concern.Now Shane must trek across hundreds of miles to ensure the safety of his loved ones in a world rapidly disintegrating into lawlessness. Yet with few functioning automobiles and a blind teenage daughter to protect, it’ll require careful planning to reach his prepper mother-in-law’s and reunite with his family.His wife has her hands full as well. When her brother’s chemo drip suddenly stops working and her son gets stuck in the hospital elevator, all Jodi McDonald wants is the security of her husband’s steady presence. But with a weakened brother and inexperienced son to look after, Jodi must remain strong amid the chaos and help guide them to her mother’s.However, even the best laid plans go awry as the miles stretch out between them. Supply thefts run rampant. Those who have necessities prey on those who don’t. Minds broken by hardship kill on sight.But the fatal mistake comes when thugs threaten the McDonald’s little girl.Shane must find the strength to do the unthinkable—or watch his family suffer the consequences.

As soon as I saw this one was coming soon, it was put straight onto my Want To Read Wishlist! Then when I got the book it was a struggle to continue with my current read as I kept looking at Crumbling World. I seriously wanted to start reading it straight away! I held off and finished what I was reading (though it was difficult and so tempting to read this one straight away!).

The book is told from three different groups of points of view. The book centres on one family and how the coronal mass ejection affects them and the world around them.

The first set of characters we meet are Shane, his daughter Violet who is blind and has a guide dog called Ruby. They are at the Nuclear Plant where Shane works and the reason Violet is with her dad is it is “take your child to work day.” They’ve just got settled in the control room with Shane’s colleague Landon who is in a wheelchair due to atrophied legs as he has spinabifida when the “event” happens. As Violet has had to leave her guide dog Ruby with security as the dog isn’t allowed in the control rooms she is immediately worried about her, but her father insists that they must prioritise getting the back up generator working first as if not the Nuclear Power Plant will overheat, and no one wants the consequences of that. When it comes to Shane, Violet & Ruby leaving they ask Landon to come with them as they know there will be plenty of room at Shane’s prepper mother-in-law’s home, but Landon asks them to take his car and bring him some supplies from his home. It turns out Landon is a bit of a prepper himself! During their trip for Landon’s supplies they are surprised how quickly everything seems to be falling apart. It seems that society isn’t far behind with people stealing, looting and attacking others for what they have. Sadly, the situation takes an even worse turn when guns become involved and trusting the wrong people can become a matter of life and death.

The next set of characters we also follow are Shane’s wife Jodi, her teenage son Owen and her brother Mike. They are at the hospital and Mike has just had his last chemotherapy treatment when the “event” happens. They are the ones that have the furthest to travel to what they deem safety at her mother’s home. This group ask Mike’s nurse, Erica if she wants to go with them but she declines saying she cannot leave her other patients. Which was a shame as again she would have been a great asset to the group of survivors, and there seemed to be a little chemistry between her and Mike. Though I guess there’s a chance we may see her again as Jodi did give her Beth’s address. On the advice of her mother Jodi asks for some medical supplies and Erica does help her sneak some medicines and bandages etc to take with them. It’s difficult traveling with Mike being nauseous due to the chemo treatment and as the days go on its clear the treatment is seriously taking his energy and stamina away. Luckily Jodi has some cash with her as suddenly that is all anyone will accept and prices have doubled or tripled. Owen seriously steps up to the mark helping his Uncle Mike. In fact, he has even more patience and is coping with the increasingly dangerous situation better than his mother. They too come across looting, and people wielding guns.

The final point of view and characters are Jodi’s mother Beth and Jodi & Shane’s youngest child, daughter Kaylee. They are at Beth’s home when the “event” happens which everyone considers as the ultimate place of safety. Beth goes to check on her elderly neighbour Mrs Eddie’s thinking she would perhaps be better off with her and Kaylee. Mrs Eddie is however reliant on an oxygen machine and even though its only a short while after the event, by the time Beth and Kaylee get across to her she is already dead. Beth calls the emergency services who explain they are having so many calls they are prioritising their calls so it could be a while until they get to collect the body.
Beth and Kaylee return to their house and start cooking food that would spoil. With Beth explaining why she is doing everything to little Kaylee, trying not to scare the youngster, yet at the same time prepare her for what may come. It comes as a bit of a shock when they end up prisoners in their home.

I had lots of favourite characters in this book, I particularly liked the inclusion of characters with disabilities and showing how they could cope, and be part of attempting to cure problems arising from the “event.” First up was Violet who insists on being part of the action and not being coddled because of her disability. Violet insists on knowing what is going on around them and has strong morals about helping people if she can. I also liked the character of Landon who was a great example of someone with a disability being able to do just as much as any other person. Landon is playing an important role keeping the Nuclear Plant from overheating. It made me, as a reader think about how people with disabilities could survive such an event, and I so wanted Landon to change his mind and go with Shane, Violet & Ruby, I believe he would have been a valuable asset and addition to their group both on the journey and in their future survival.
Other characters I really liked were Owen and how he stepped up, caring for both his Uncle Mike and his mother Jodi. Initially I was wary of Corbin, which I think was the intention of the author but it soon became apparent that he was going to become good friends with Violet and become an asset to their group of survivors.
I did like the older characters such as Mike, Jodi and Shane but I felt the younger characters of Owen, Violet and Corbin are the ones whose journey we will be concentrating on in the following books to come.

As soon as I started reading this book I was hooked. I quickly became attached to the characters and felt invested in them and was willing them to make the right decisions and survive everything that was being thrown at them. I have to admit when I start to read a book by Grace Hamilton, I have high expectations! I hated having to put this book down to eat, sleep etc and I ended up reading it in just two reading sessions and finishing it quite late at night/early morning! I can’t wait to read more! In fact, as I have the next book in the series, I am going to start that one next I need to find out how things are going for all those characters. Beth & Kaylee with the hidden prepper supplies, that could make them a target of looters and unscrupulous survivors. Shane, Violet & Ruby and Corbin, who eventually get to the end of their long eventful journey. Finally, Jodi, Mike and Owen who are still struggling to make their way to Beth’s home.