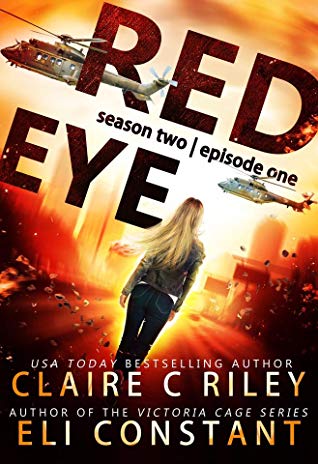 BLURB from Goodreads
When Rose and Sam find themselves in a military camp surrounded by other survivors, they have no idea that the darkest days are yet to come.Rose, feeling more homesick than ever, looks to Nolan for guidance. With her plans of seeing the world now nothing but a pipe dream and her parents likely dead, she contemplates the bleak future ahead of her.It’s getting easier to kill, but harder to hold on to hope.Sam, still in shock over the realization that she’s probably becoming the very thing she fears, seeks reassurance from Barrett—the darkly protective criminal they freed from the airport jail. The end of the world is no time for romance, but he’s not the sort of man who takes no for an answer.She’s feeling anxious, confused, and she’s got a terrible craving for red meat!People used to say when life gets tough, there’s always tomorrow. But that was before the apocalypse. Now, life is a 24-hour cycle of hard knocks and who knows if there will even be a tomorrow.The unlikely pair thought 30,000 feet in the air was hell,but being on the ground’s proving no better.All they can do is stick together,focus on whatever lies ahead of them,and try not to die.

I did intend to wait patiently for the whole Season but as soon as I saw the first Episode was available, I caved immediately and bought it!


Once again the Season Two Episode One cover has bright orange on it, to represent the fires and post apocalyptic elements of the book. Again, there is a lone female on the cover but different to the one on the Season One cover. As the second episode is going to be entirely from Rose’s point of view I would say the female featured on the Season Two cover is more than likely Rose. The cover could certainly represent a scene from within the book as helicopters do feature in this episode. I think the cover works well and it does fit well with the Season One cover.


Another thing I love is the first line of the blurbs for these books, its like the main character (either Rose or Sam) is talking to you. Then the blurb launches revealing more about the book. The genres listed for the book and series so far are Sci-Fi, Post-Apocalyptic, Horror, Zombies & Romance.

This book begins by introducing the reader to a new character who is moaning about the fact they have been sent to a school run by nuns. Living at the school means no wii-fi, or cable but one of the things that really irritated were the clothes her mum had packed for her to wear whilst in the characters own words is her “vacation to bible-land. The girl was instantly nicknamed Princess due to her expensive clothes and jewellery, which of course she hates. Princess hates a lot of things! It’s whilst serving lunch at a shelter with the nuns that Princes come eye to red eye with a “zombie” and she knows things are going to get a whole lot worse than they are.

Then the book jumps to where Season One ended with Sam, Rose, Nolan, Barrett, Karla & Leon at the entrance to the Army run & defended. Naturally those that know about Sam’s little . . er. . unique so far problem, are really worried. When they don’t hide their worries very well and reveal “something” is wrong or different about Sam,
An argument ensues and becomes quite heated as both Sam and Rose are still upset about losing Jaime & Alexa. Rose and the others try to say Sam is feeling “off” due to what they have been through. That doesn’t seem to put Karla & Leon’s minds at rest as they continue to panic and want to be as far from her as possible so they head off alone, and later decide to stay split from the rest of the group. Karla & Leon have been placed with some Nuns and kids in a larger tent within the settlement.

There’s a distraction which allows Sam, Rose and Nolan to sneak into the camp with no blood test taken, avoiding the possibility of Sam’s secret being revealed. Barrett finds an almost empty tent that they soon claim as one they have been allocated to when the young occupant named Andy returns to it. Andy shows the group of four around, taking them to eat, and to get the basic supplies on offer to everyone in the camp. It turns out Andy was at the homeless shelter as he attended the same school Princess was joining at the beginning of this episode.

In this episode Sam has to use the codeword “coconut” she and Rose came up with for when she felt she was going to “zombie out”. Barrett and Rose have to think quickly and come up with a strategy to help Sam calm herself down and stop her self from Zombie-ing out! There’s lots of discussions and disagreements about whether Andy should be allowed to tag along with the now smaller group when the decision is made to leave the Army run camp. However, just as they have made their decision there is some sort of breach with the zombies getting into the camp. Literally all hell breaks loose and the couples, Sam & Barrett, Rose & Nolan are separated with one couple in a helicopter and the other couple left behind right in the middle of the fray of the Army camp.

Once again, I found I really enjoyed this novella length story which is the first episode of Season Two and am looking forward to reading more as soon as I can. I would definitely recommend this series. I would say the episodes are “short and sweet” but it’s more “short & a bit gore-y”. There are still the hints of romance in this episode too, between Sam & Barrett and Rose & Nolan. Though I wonder if the budding romance between Rose and Nolan will be affected by the two girls being split apart? Will Rose blame Nolan for the split and physically preventing her from doubling back for her friend?

Summing up when can I read more? Well, I should probably confess that I have bought the next episode ready to read when I have finished by current reads!