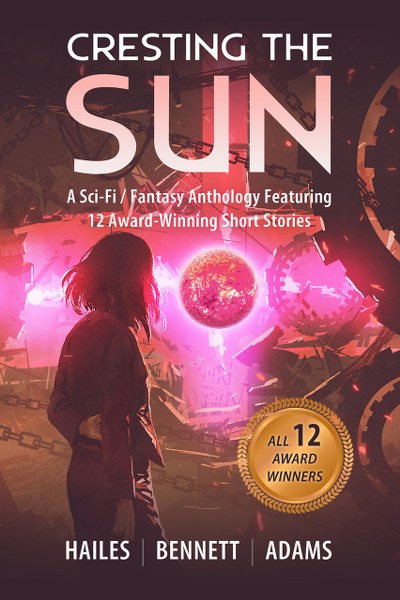 
Cresting the Sun is a science fiction and fantasy anthology compiling twelve award-winning short stories (with a taste of crime and horror mixed in). Each included tale has in recent years earned recognition from the esteemed L Ron Hubbard Writers of the Future contest judges, with adventures sure to rattle your bones, launch you beyond the stars, and carry you through space and time.

Prepare yourself, hold on tight, and enjoy the ride!

Roadblock by Brian C Hailes - All Drew really wants is a chance with his high school crush, Lily. But on his way to a party where he plans to give it one last shot, he's forced to take a detour off Highway 89, where fate has something else waiting in store.

The Hubbard Drive by Rick Bennett - I just can't resist comedy. This time-dilation romp is my little Einsteinian "thought experiment" and tribute to L Ron Hubbard, a sci-fi giant.

L.E.A.P. by Nicholas P Adams - A cop with the ability to navigate the time stream puts his skills to the test when a series of murders threatens his freedom and the future of those he'd kill to protect.

Sketch Artist by Brian C Hailes - An innocent girl witnesses a murder, and works with a San Francisco Police Department sketch artist who has an uncanny ability to draw portraits based on witnesses' firsthand accounts with a ninety-five percent facial recognition accuracy rate. However, as they both find themselves caught in the middle of a deadly mob war, can they find the killer or killers before they themselves fall prey to the infamous crime families?

The Devil & Woody Harrelson by Rick Bennett - Ever think about selling your soul to the devil? You may already have done just that if you clicked "accept" on the terms and conditions on an online program license agreement.

Half Z's by Nicholas P Adams - A human/alien half-breed, desperate for a connection with either world, travels to the Gya'ol enclave for answers when she discovers a rapidly forming growth inside her body.

The Chaser's Prey by Brian C Hailes - Having been shipped off to alien scout camp, Gareth Stillwater stumbles across the other boys torturing and mutilating a squirrel-like creature called an ehkhoor'n. When he confronts the alpha scout, Morrow Krin, and his accomplices, they bully him into secrecy . . . until he decides to steal Krin's hoverbike and put the animal out of its misery, placing himself (and everyone else) in harm's way.

Overture to The Opera of The Blades by Rick Bennett - This literal "rock opera" features a computer genius who speaks only in palindromes and shows the effect she has on an immortal being.

Uncoiling the Loop by Nicholas P Adams - A temporal manipulator struggles against time, the authorities, and a crotchety barkeep, to prevent his father from going on a killing spree before it happens.

The Artist's Model by Brian C Hailes - An artist's model with a past veiled in amnesia meets a mysterious visitor who claims to know who and what she really is. But when her most beloved master artist and patron unexpectedly dies, she must find a way to live up to her otherworldly destiny, and fulfill her new role.

Elvis, Baby Jesus, and One UFO by Rick Bennett - Most first-contact stories involve a superior alien race ravaging the Earth. Here's my take on the opposite scenario: A superior alien race gets crippled by a clever Earthman-generated computer virus.

Gone are the Light-Wielders by Nicholas P Adams - A shepherd boy holds the fate of the colony in his hands when he must choose between keeping a promise to his mother and his responsibility to the community. 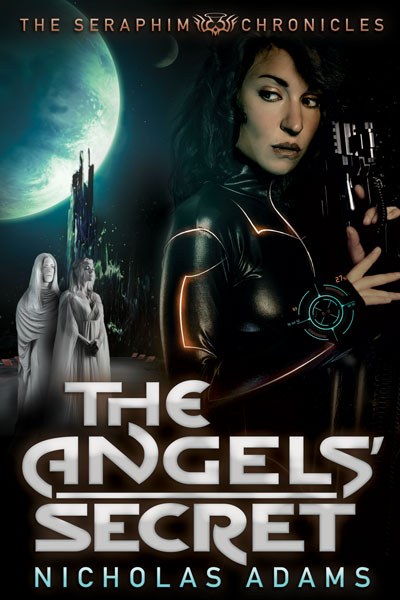 
After her parents mysteriously disappeared at the age of thirteen, Evangeline Evans has been on her own. As a military pilot for Olympus, the most powerful and technologically progressive Citadel of the new world, she keeps her reasons for finding them a secret.

Without warning a terrifying disease that could destroy civilization begins to infect citizens across the city. Only the race known as Angels—who brought advanced technology to Earth—seem to be immune to its devastation.

Evangeline and her husband Jack, an Artificial Intelligence designer, are swept into a secret war between the Dissidents in the Low Technology Zones and The Quorum of Zeus.

The Human race is on the precipice of Extinction. Who will prevail? Angel or Human? High Tech Olympian or Low Tech Dissident?

But the better question is… Who SHOULD prevail?

**25% of Monthly Net sales are donated to the Wounded Warrior Project!
https://www.woundedwarriorproject.org/** 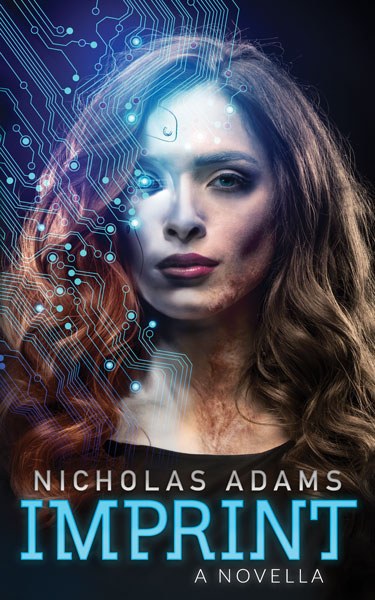 Then “The Scald” deformed and killed millions more.

Imprisoned above the Arctic Circle in the Canadian Northwest Territories, Malcolm's only hope to stave off his execution is to find the cure to save not only humanity but more importantly, his beloved wife.

Will Malcolm’s brilliance unlock the secret to freeing Cynthiana from her prison of flesh? Or will he watch her die like all the others? 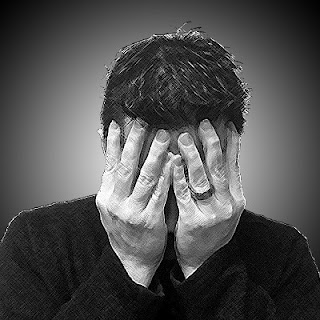 Nicholas Adams grew up in the small, rural town of Boring, OR with his six brothers and sisters.

After graduating from High School in Gresham, OR he attended BYU-ID and received his Associates Degree in Pre-Med. From there he returned to Portland, OR and attended Portland State University where he earned his Bachelor’s Degree in Biology/Pre-Med before changing his career track to Architecture.

He completed his second Bachelor’s Degree in Architecture at Portland State University before going on to achieve his Master of Architecture Degree from the University of Utah in Salt Lake City, UT.

After his graduation he and his wife moved to the Phoenix Arizona area where they adopted four children over the next eight years.

Nicholas currently lives in the Salt Lake City area where he is an Associate member of the American Institute of Architects (AIA).

His other interests include reading, video games, singing and motorcycles.

I donate 25% of my Net sales to the
Wounded Warrior Project!
https://www.woundedwarriorproject.org/