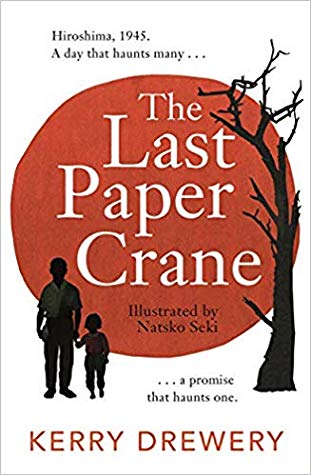 BLURB from Goodreads
One thousand paper cranes to achieve your heart’s desire.1945, Hiroshima: Ichiro is a teenage boy relaxing at home with his friend Hiro. Moments later there is a blinding fl ash as the horrifi c nuclear bomb is dropped. With great bravery the two boys fi nd Hiro’s fi veyear-old sister Keiko in the devastated and blasted landscape. With Hiro succumbing to his wounds, Ichirois now the only one who can take care of Keiko. But in the chaos Ichiro loses her when he sets off to fi nd help.Seventy years later, the loss of Keiko and his broken promise to his dying friend are haunƟ ng the old man’s fading years. Mizuki, his grandaughter, is determined to help him. As the Japanese legend goes, if you have the patience to fold 1,000 paper cranes, you will fi nd your heart’s desire; and it turns out her grandfather has only one more origami crane to fold...Narrated in a compelling mix of straight straight narrative,free verse and haiku poems, this is a haunting and powerful novel of courage and survival, with full-page illustrations by Natsko Seki.

I instantly loved the cover of this book, the white background featuring a large crimson red disc which I would say represents a red sun, that features on the Japanese flag makes it a really striking image. There’s a silhouette of a tree, which upon reading the book I would say is a burnt skeleton of a tree. I think the people on the cover represent Ichiro and Keiko whose story is the main focus of the book. The by-line on the book is “Hiroshima 1945, A day that haunts many . . . . a promise that haunts one” fits the book perfectly and immediately evoked emotion within me and made me put his book firmly on my “must read” list. The first line of the blurb “One thousand paper cranes to achieve your heart’s desire” refers to a Japanese tradition of whoever folds and creates 100 paper cranes will gain their hearts desire. The crane itself is a symbol of hope, peace, and loyalty and to be given one is a deeply thought and personal gift. The paper cranes play a central role in this book.

The book begins with a young man called Mizuki thinking how much his grandfather has changed since the death of his grandmother. It seems that when Mizuki’s grandmother died she took a large part of his grandfather too. It was clear to everyone that his grandparents had been deeply in love. Mizuki is left alone with his grandfather when his mother heads off to work. Mizuki is surprised when his grandfather says he must tell him something that no one else alive knows. This important news his grandfather needs to tell him is something his grandfather says must be remembered by someone.  Mizuki’s grandfather, Ichiro Ando, says he is a bad man, and that there is no magic in the world. Ichiro brings out a box and removes a book, or rather what is left of what was once a book and starts to tell his life story. The story begins with Ichiro being at his friend Hiro’s house, they are talking when everything goes bright white and then silent. That white light was the bomb being dropped on Hiroshima…it took lives and drastically changed the lives of those that survived. The book then tells how Ichiro digs his way out of the now collapsed building that was Hiro’s home. Ichiro helps locate and free Hiro and they are quite literally both stunned. They soon make a plan that they should go to hospital to get their injuries tended to. Then suddenly Hiro mentions his five year old sister Keiko who is at kindergarten, and the two friends decide to go find her first. The book tells of the horrors that the two boys encountered and the devastation they saw all around them. They do find Keiko and there’s a point in the book where an extremely difficult decision has to be made. All three of them have made their way into the water to escape the advancing flames from all the fires that are burning ever nearer to them. Ichiro is holding Keiko so she is not swept away by the changing current of water and bodies. Ichiro is faced by an impossible choice to put a little 5 year old child down to almost certainly drown and die, or watch his struggling friend Hiro be swept away. Ichiro knows Hiro would want him to save Keiko but there is an extremely emotional moment in the book, a look shared between two friends, words not verbally spoken, but said through looking at each others eyes. Ichiro lost his mother, lost his best friend when trying to escape the flames, carried his best friends little sister until he could no longer. He wakes up in a Tokyo hospital weeks later, where he meets the women who eventually becomes his wife & his life, yet he carries guilt about being separated and never getting back to his best friend little sister.

I don’t want to delve any further into the brilliant details of the story as you really need to read it and have the story un-fold as it did to me when I read it. It really is a beautiful tale. You immediately feel sympathy for Ichiro yet at the same time you know as a character he would not want that. To everyone else, characters in the book and as a reader, he really did everything he possibly could and was heroic. Yet Ichiro doesn’t see it that way, to him he failed his best friend Hiro and heartbreakingly he feels he desperately failed Keiko too.
The way he insisted he should search for Keiko, despite his own ill health and injuries, leaving little paper cranes was so poetic. How he went on to marry someone who he met whilst in hospital being treated for the injuries he incurred when the bomb fell, along with the health issues he developed because of the air he breathed whilst trying to escape the fires.

I have read other titles by this author such as her Cell 7 series which is a YA, dystopian genre book and totally loved them. This book is again aimed at the Teens and YA Audience, but is historical in genre, though based on the true, real life, tragedy of Hiroshima and its aftermath. I actually sat and read this in one sitting. As soon as Ichiro started telling his story to his grandson, I knew there was no way I was putting this book down until I had read to the very end. Ichiro’s story is truly addictive reading.
My immediate thoughts upon finishing reading this book were that it was a very
poignant story of an elderly man who survived the bomb that was dropped on Hiroshima, and lost everything dear to him.

To sum up this is an amazing fictional portrayal of a devastating act carried out during World War 2. I had heard of the place called Hiroshima, I knew there had been devastation but embarrassingly hadn’t particularly thought of the individual impact on the civilisation. Of course, I had seen the famous photograph of the naked little girl running down the street. It wasn’t something we were specifically taught about at school. I think this would make a great conversation starter for teens to learn about Hiroshima. A must read!