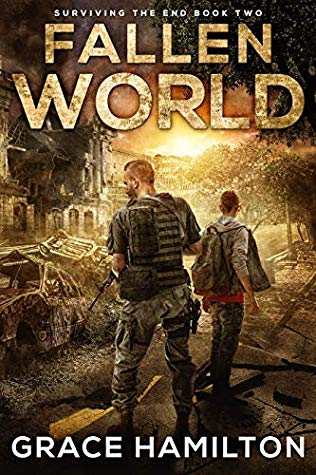 BLURB from Goodreads
Family is all that matters when friend becomes foe—and the stakes are survival.The world has become a dangerous place for Shane McDonald and his family since the solar storm wiped out the power grid. Tensions flare when it grows clear the dire situation will be prolonged and most are ill-prepared. Even the friendly small town of his prepper mother-in-law has drawn unwanted attention as word gets around about sharing their supply stores.And strangers begin to infiltrate the once peaceful Georgia community.All Shane can think about is where his wife and son ended up in all the chaos as the hours stretch into days since they last communicated. Jodi is far too trusting a soul, her desire to help the downtrodden a dangerous commodity among desperate and increasingly hostile citizens.But Jodi isn’t without resources when push comes to shove. When her son and cancer-stricken brother come under attack, she finds the strength to do what’s necessary to ensure their safety—and inadvertently draws the attention of a menacing gang.Now they must stay one step ahead of their pursuers in a race to reunite with family.Before all hell rains down on them.

REVIEW
I have now read quite a few books and even full series by Grace Hamilton and have to say so far, I have enjoyed them all, some of them I have adored, and I do recommend this author if asked for recommendations in the post-apocalyptic genre. After reading so many of her books I have read a little about the author, though Grace Hamilton is a pen name this female author is a prepper in real-life so the situations and actions of the characters within her stories are so realistic and believable. As a reader you are so drawn into the book you feel like you are along side the characters and you really want the good guys to win and see the demise of the bad guys! After reading and loving Crumbling World, the first book in the Surviving The End series I had put this one straight on to my “must read” list. After reading the book, I would say that the cover depicts Jodi, her brother Mike, who is still suffering the consequences of his recent last chemotherapy treatment and Jodi’s teenaged son who seems to have aged and be wise beyond his years. The cover could easily be a scene within the book. I think the cover goes well with the rest of the series covers too, making them look very cohesive as a series.

This book picks up from where Crumbling World ended with Jodi, Mike and Owen still struggling to get to what they consider the relative safety of her prepper mother’s home in Georgia. It’s dangerous and becoming increasingly difficult travelling. There are abandoned cars and small settlements seem to be setting up anywhere and everywhere. Sadly, not everyone is out to help each other, there are plenty of unscrupulous, armed, angry people out just for themselves who are prepared to do whatever is necessary to take what someone else has if they decide they want it.
Jodi is injured, though thinks it is quite ironic that she would have thought getting shot would be the worst pain ever. Jodi is now discovering that the worst pain comes afterwards when trying to function in a world that appears to have gone mad. Mike is still suffering side effects from his chemotherapy which is making progress slower as they keep having to stop for him to rest. There are times in this book where he tells them to leave him behind as he is well aware the longer, they take to get to his mothers the worse the world seems to be becoming and the more danger they are in. However, of course nether his sister Jodi nor his nephew Owen will hear of it. As in the first book, Owen takes on more and more responsibility and Jodi has to reluctantly allow him to do so, as because of her injuries she herself is struggling.

One of Beth’s neighbours quickly realises that Beth is more prepared for the shops to be closed and the world they now find themselves in. Beth is in her mind just helping out a neighbour when she provides her lonely neighbour with some food. Unfortunately, this neighbour then does nothing to help her own situation and begins a pattern of turning up for hand-outs of supplies. Shane attempts to warn Beth that this behaviour from her neighbour will not stop and the neighbour will talk and attract others looking for an easier way to get food and supplies than looking for themselves. He implies the supplies should be kept for their family. The atmosphere becomes quite tense between Beth and Shane but Beth points out she doesn’t know Corbin but she has welcomed him to their families and is sharing their food etc and then goes on to say she is the one who has prepared for such an incident and they are in her home so it is up to her who she shares supplies with. Shane has little choice but to let the incidents go but Beth does come to realise she should have listened to Shanes advice earlier when the situation worsens.

Things go from bad to worse for Jodi, Mike and Owen when they finally find a fairly reliable source of transport and it is taken away from them. Not only that the biker gang leader decides he is going to take Jodi with him and his men too. All Mike & Owen can do is watch as she is taken from them, though they do go in search of her as soon as they find a quicker way of travelling themselves.

We see more characters that are not the McDonald family in this book. The local Sheriff, and then there’s the ever in demand Doctor. Luckily the family have a couple of vehicles at their disposal for now but life is nothing like it was before and it looks like it may never be the same again. Shane does coerce and cajole Beth into allowing him and Corbin to put up a high fence around their property. I have decided my initial wariness of Corbin was unfounded and he is really integrating into the McDonald family. I think Corbin and Owen are becoming form friends, especially when Corbin teaches Owen how to safely use a gun. Which is something Corbin tells Shane he thinks everyone should be able to do. Violet is feeling increasingly side lined and feels she is pushed to stay behind from any ventures out because of her disability but it’s during one of those times that she ends up using a newly acquired skill to help save herself and her family. Then the search for a doctor begins and the treatment for injuries have had to resort back to somewhat old school methods. The characters in this series are rapidly becoming aware that what was once perhaps a small injury and a quick solution of antibiotics or a small operations can now mean an infection or death.

It’s also decided that they should have some sort of meeting somewhere to see who is still in the area and if they can come together as a community in attempt to re-build and coexist peacefully. The Sheriff, James, takes the lead and he goes along with Shane to the high school when its noticed that there are lights on inside. What they find inside is mayhem, graffiti, food strewn around and basically kids doing whatever they want running around. James and Shane eventually get some order and send kids off in groups that live nearby to go to their homes and see if their parents are there. Though as a reader and as a parent like Shane & James I found it hard to think that in such a catastrophe that parents had not shown up at the school in search of their children. The few kids left behind who know their parents are out of state somewhere and no one will be at home with them are taken back to Beth’s house. Then it’s Beth’s turn to rise her eyebrows at Shane bringing in more mouths to feed. As much as he tries to put his only family first, he finds it impossible to turn his back on children in need of shelter, food and protection.

As with Crumbling World I thoroughly enjoyed reading this book, in fact I think I enjoyed it more. It has now become apparent that there is going to be no easy fix for the power outage, the shops are not going to be re-stocked anytime soon, and there is no police force or army that is imminently going to come to their rescue either.
It seems word has got out that Beth has plenty of food etc, so what started out as a safety net for her family and a few friends is soon becoming somewhat of a target on their backs.

My immediate thoughts on finishing reading this book were Wow! What a fantastic second instalment in an already brilliant series. I read bk1 & bk2 back to back and if I had the next one now despite it being 11pm I would be starting to read it now!

To sum up this book has great world building, with characters that you grow almost immediately attached to. Then these characters end up in the middle of some really edge of your seat suspense and action. I am certainly eagerly looking forward to the next book in the series. (New World). This really is addictive, nail biting, edge of your seat stuff happening to some great realistic characters that you could honestly imagine being friends with, and/or living next door to.