The unlikely pair thought 30,000 feet in the air was hell,
but being on the ground’s proving no better.
All they can do is stick together,
focus on whatever lies ahead of them, and try not to die.

THIS EPISODE
This entire episode is told from Sam’s perspective.** Separated from Rose, Sam clings to Barrett for support. But the horde of undead and her worsening affliction threaten them both. ** 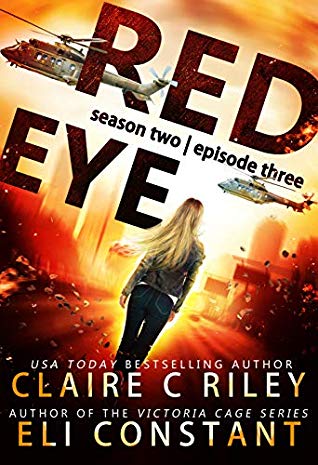 BLURB from Goodreads
When Rose and Sam find themselves in a military camp surrounded by other survivors, they have no idea that the darkest days are yet to come.Rose, feeling more homesick than ever, looks to Nolan for guidance. With her plans of seeing the world now nothing but a pipe dream and her parents likely dead, she contemplates the bleak future ahead of her.It’s getting easier to kill, but harder to hold on to hope.Sam, still in shock over the realization that she’s probably becoming the very thing she fears, seeks reassurance from Barrett—the darkly protective criminal they freed from the airport jail. The end of the world is no time for romance, but he’s not the sort of man who takes no for an answer.She’s feeling anxious, confused, and she’s got a terrible craving for red meat!People used to say when life gets tough, there’s always tomorrow. But that was before the apocalypse. Now, life is a 24-hour cycle of hard knocks and who knows if there will even be a tomorrow.

The cover is the same as for episode one and I guess it will be the cover for the whole of season two. Though I wouldn’t have called myself a zombie fiction reader/lover I do really enjoy these novellas.

We have had an episode all from Rose’s point of view set just after she was parted from Sam, so now it’s Sam’s turn to reveal what has been happening to her and Barrett when they were parted from Rose, Nolan and Andy.

The prologue for this episode features two characters that we have already met but chose to go their own way when they became suspicious of Sam and her temper/illness. Karla and Leon have been placed in the same tent as the Nuns and children that Andy has “escaped” from. Karla see’s this as some sort if ethereal sign that God is watching over them and is going to keep them safe and save them from the increasing number of zombies now roaming the world. Karla is talking about them being safe and kind of lecturing Leon to have faith in God but Leon is zoning out, not being a great believer in God himself. Leon is constantly thinking about the only one he cares about Danny, his Great-Dane dog that is stuck at their home alone. Leon has prepared a bag and decides there is no one left he cares about around he so he is going to do what he wants and go back home to his faithful companion and dog, Danny. He has a “go-bag” prepared and is on is about to leave the tent with Karla and her talk of God when he hears a sudden noise. He cautiously investigates and runs back to get Karla but he is too late. Karla is quite literally being eaten by a zombie in their previously safe haven tent. Leon turns away and runs not wanting to wait around to see if the zombie kills Karla or if she becomes a zombie himself.

The book then takes up the story from Sam’s point of view, she is realising Rose, Andy & Nolan are being flown away from her and Barrett. This leaves Sam and Barrett right in the middle of “zombie hell”. There is blood, guts and injuries all around them, which Sam is finding increasingly difficult to deal with. All the blood and the fact some has splashed onto her face, near her mouth makes it impossible for Sam not to give into the growing temptation of tasting it. She licks her lips and its as if she is suddenly craving more and she has to have it now! Sam gives in thinking it’s inevitable that she will become a mindless zombie and end up hurting someone. Sam becomes melancholy, because she is separated from Rose, thinking it’s probably best their group has been split, she is no longer in danger of hurting her friend, or putting her in the awful position of having to choose what to do about her. She knows Barrett has a no nonsense, approach and if she snaps and turns full zombie, he will not hesitate to kill her. Barrett manages to find a solid building used to store weapons for them to hide in until the worst of the carnage is over. The irony of the secure building housing weapons rather than people does not escape Sam. Sam does struggle with the smell of blood and the nearness of the other zombies, freaking out and going quite feral at times but Barrett deals with it all. In fact, we see a softer side to Barrett in this episode, just as we saw a softer side to Nolan in episode two.

Barrett really is a complex character. I enjoy both liking and hating him in almost equal measure. On one hand he is no nonsense and will do whatever to whoever to survive. He has no real problem with ignoring those hammering on the weapon store door asking to be let in. As far as he is concerned, they may be humans but they could also be bitten humans about to turn or even zombies and he has no intention of letting anyone else into their little safe haven. Yet at the same time the way he comforts Sam, and basically delivers a knock-out punch to her to stop her going “full-feral-zombie” instead of shooting her shows he does have some sort of feelings for her.

There are some “icky” “yucky” scenes where the zombie virus gets the better of Sam and has her tasting the fluid from around a victim’s eye, wanting to lick blood from a knife someone has been stabbed by. They are all in context and are equally funny and gross at the same time. Sam’s fascination with everything blood and guts would surely freak Rose out so maybe it’s a good job they were separated right now.

There is plenty of zombie chomping humans and Barret & Sam killing zombies to get to safety, so lots of action in this episode. We also learn a lot more about Barrett and his childhood which does explain a lot about how he chooses to live his life now. Barrett asks Sam about her past, about how she got into dancing, which reveals he has been watching her closely and he mentions only a dancer could have moved in the way she did when she was fighting zombies. So, we learn more of her past story of dancing, her dad taking her all over in the car for competitions. Then when her dad died how she didn’t feel like dancing anymore, to her there was only really one person she wanted to dance for and he was no longer there. Barrett also has a serious talk with Sam telling her if she doesn’t stop thinking and acting like a victim, she won’t survive this mayhem around them. Sam may listen to Barrett and feel safe with him but she will not blindly follow him and do as he wants which she makes perfectly clear when she tells him she has every intention of finding Rose again. They may have only just met at the beginning of this zombie outbreak but they shared a bond that kept tugging them to be with the other as though they need to be together to survive.

My immediate thoughts upon finishing reading this episode were it was great to find out what's been happening to Sam & Barrett when they were separated from Rose & Nolan.
Sam is getting a taste for blood, eyes & brains in this episode, but Barrett seems to still be able to distract her to get her back to herself. We learn more about Barrett’s past as Sam asks him and he surprisingly answers. Also, we learn about Sam being dancer and the fact dancing has lost its appeal since her dad died. Why is Barrett so protective over Sam when his tough guy persona would suggest he would dump her? I wonder if the fourth, final episode in this season will from Rose or Sam's POV, or maybe a bit from them both & Nolan & Barrett too.

To sum up I once again, I found myself reading this novella in just one day. Once you start reading you really do not want to put these episodes down! I try to make sure I start reading when I have some uninterrupted time as I get rather irritated if I have to put the book down! So here I am (im)patiently waiting for the next episode!