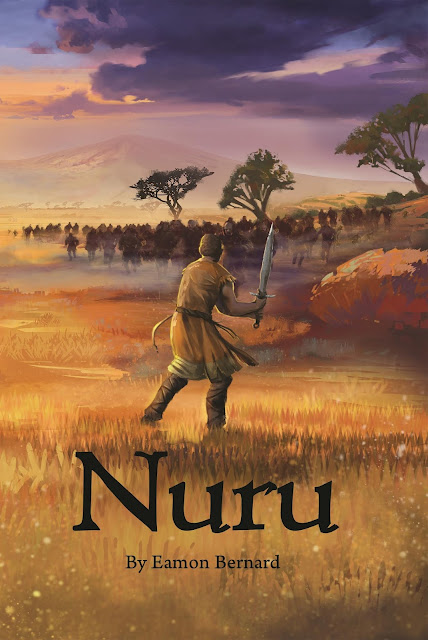 BLURB from Goodreads
"On the ancient, endless Savanna that Nuru was raised, life was hard but simple. He and his tribe traversed the land driving their herd from the ocean in the west to the mountains in the east. Everything changed in a single night when monstrous creatures out of legend attacked Nuru and his family and transformed his life forever. Now he must find a way to survive in a hostile world and find a way to warn others about the evil forces marshaling in the silent darkness."

AUTHOR INTERVIEW
What or Who inspired you to start writing? And how long have you been writing?
I was always that kid sitting in the back of the classroom doodling spaceships in his notebooks. I always loved making up stories when I was a kid about Star Wars or Lord of the Rings or whatever else and eventually I started making up stories of my own. In high school I would write these funny little episodes about my friends and me and they all found it hilarious. I sort of followed that feeling and I discovered I communicated far better through writing than I ever did verbally. I kept writing and got a degree in journalism and here I am today.

How did you come up with the cover for Nuru? Who designs the cover of your book(s)?
I sketched out a rough outline of what I wanted the cover to be and what I wanted to communicate. I wanted to give people who saw it an idea of what the book was without being cluttered or giving away aspects of the plot. I wanted it to show it was about a young man who was alone and facing incredible odds, I wanted to show the shadowy unseen threat of the antagonists, the Adze, I wanted it to demonstrate it was in the sword and sorcery genre and I wanted it to highlight the African Savanna inspired setting. I looked at several artists on Fiverr.com and found a great one in Italy named Gaetano Caltabiano. We corresponded back and forth for a couple months, I sent him my sketches along with examples of clothing, weapons and scenery and he incorporated them all into a really beautiful cover.

Where did you get your inspiration to write Nuru?
I have been reading a lot of fantasy in the last ten years so that was sort of where my head was at. I wanted to tell the story of a young, very human, character; one that stayed away from the chosen one archetype. Nuru, the character, is more or less a regular person put into extraordinary circumstances, and most of his companions in the book are as well. Those are the characters I've always been drawn to since they are easier to relate to. I also think the drama in the story is so much richer because the deck is usually so stacked against them.

How long did it take you to write Nuru?
I began writing it in 2015. I had tried and failed to write a full novel a few times before, but I had a pretty good idea of "Nuru" as a whole, so this time I sort of promised myself I would see this one through. I got about halfway done with it when I got a job offer and chance to move back to the area where I had grown up so that interrupted the writing process for several months. Then, of course, I had to figure out how to actually make a book which always felt like groping around blindly in the dark for a light switch. Eventually, by some miracle, I was able to follow through on that promise.

Did you have to do a lot of research for Nuru?
I did a fair amount when I was starting the writing process. I looked at different African cultures and their folklore. I tried not to appropriate anything directly, but rather be inspired by what I was seeing. I didn't want to set a fantasy story in Africa, but I wanted a fantasy world based on Africa the way the Seven Kingdoms in "A Song of Ice and Fire" is based on Medieval Europe.

What is it about the African culture you find so fascinating?
What drew me to it was that it is such a rich source of inspiration that sadly few people use. There's a plethora of different cultures from the ancient Egyptians to the Maasai to the Zulu with art and folklore and customs that I think often all get grouped together in Western society as "African." There's a lot to explore that most of us don't get exposed to in America. I wanted a fantasy story that broke from tropes and looked and felt different. Only a few authors such as Tomi Adeyemi in "Children of Blood and Bone" have ventured into that area and it's a shame.

What can we expect from you next and in the future?
Currently, I'm working on a novel called "Northbridge and Co." It's set in 1910 London and follows Giles Northbridge and his various friends and associates who cover up scandals for the rich and powerful. I'm hoping to get it completed and published by the end of the year. After that, I'm working on "Winterlong," which is a murder mystery inspired by my time working as reporter in a small town in northern Michigan. Then I will probably want to return to the world of Nuru. I intend it to be the first in a series and I have an outline for the next book.