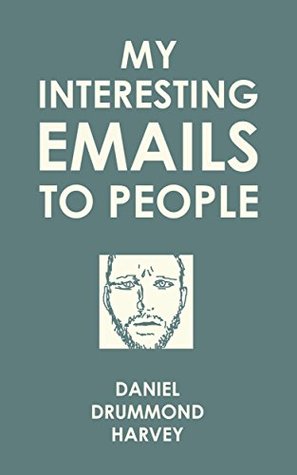 BLURB from Goodreads
I have written a number of interesting emails to people, a selection of which are published in this book. The people I have written to include Donald Trump, Bryan Adams, Heston Blumenthal, Jerry Bruckheimer, Jeffrey Archer, various chief executives and some other people. I have also included their replies, where appropriate. I hope you enjoy this collection. Many thanks, and good luck!

INITIAL THOUGHTS
After reading some great amusing books such as Spending The Holidays With People I Want To Punch In the Throat by Jen Mann, Confessions Of a GP by Benjamin Daniel, Confessions Of A Male Nurse by Michael Alexander and my current read Sh*tty Mom For All Seasons by Alicia Ybarbo, Mary An Zoellner & Erin Clune, I was hoping for more, I thought this may be more of the same sort of humour. That the author Daniel Drummond Harvey had wrote a collection of amusing letters of complaint and had chosen to share them with us in this book.

MY REVIEW
I downloaded this one for free from Amazon UK. The cover is fairly plain, consisting of the title, and author name ans what you could describe as a portrait of a male's face, the author perhaps? Would the cover make me pick this one up in a book store? Honestly? no, the title would be what would push me to probably pick up the book and want to read the blurb to learn more about its content.
The book consists of letters, emails, etc that author Daniel Drummond has sent to various people, companies etc and the replies if her received them. On some occasion there has been a little more interaction and Daniel has included his replies and subsequent replies he received too.
I guess I should give examples of the people Daniel has written the letters to such as the one Daniel writes to Boots complaining about a sandwich meal deal he purchased. Daniel does receives a reply from Boots, with an apology saying his custom is valued and Daniel is sent a £10 Gift card by way of an apology!
Daniels complaint letters range from being straight to the point yet, witty and a little tongue in cheek to if I'm totally honest been just silly.
Other's on the receiving end of letters from Daniel Drummond include, Theresa May, Sure Deodorant, Heston Blumenthal, and a large company who makes board games with an idea.
By far the funniest is the letter Daniel writes to Haven holiday Parks about one of their park adverts. So what is Daniel's complaint? In the TV advert the Have Holiday Park Mascot Rory helps a little girl get a whole in one whilst she is playing mini/crazy golf. Daniel explains that he is worried about Rory breaking the rules, and asks if Rory intervenes in all the sports in this way etc etc. I have to admit this letter and reply etc did make me smirk, snigger, chuckle and laugh out loud a little too.
This is a book you can dip in and out of so perhaps an ideal tea/coffee break read for work or the bus journey into work. I believe in being totally honest and I did end up feeling a little bored whilst reading this book. Having said that there were some amusing, witty parts in the book I enjoyed. I fell I ought to say I would have been seriously unhappy if I had paid more than 99p for the book. (As I said early in my review I actually downloaded this titles when it was available on Amazon UK free)
So did I enjoy the book? Being totally truthful, I thought a few of the letters were amusing but some of the interactions felt a little too long winded to be funny. Maybe its just my humour, but the book didn't deliver as I had hoped it too.
Would I recommend the book? This is a difficult one for me to answer as some of it is amusing to read but there were some letters I just felt bored with.
Would I want to read another book on this type of subject matter? Yes, I have read other non-fiction humour titles such as Jen Mann's People I Want To Punch In The Throat series, and some of the Confessions series such as, Confessions of a GP by Benjamin Daniels and Michael Alexander's Confessions Of A Male Nurse and I totally loved them. It's just this one wasn't as funny as I had hoped it would be.
Would I want to read another book by Daniel Drummond? I would still take a look at the blurb of anything written by Daniel Drummond.