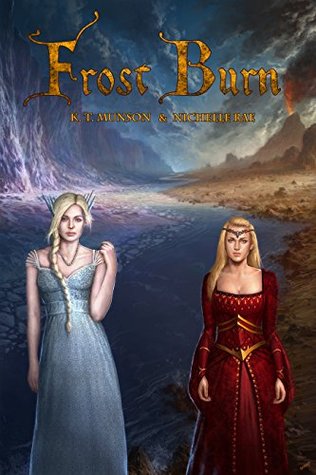 BLURB from Goodreads
Fire and Frost; no two nations have ever been so divided. Only two bridges across the great River Gora connects them and their long standing hatred. When spring comes early the Frost Nation looks upon the Fire Nation with suspicion. Soon they will discover that the rising rivers, warmer temperatures, and the quakes are all a result of something far more terrifying then each other. When the world seems to turn against them they will only have each other to look to. Can they put their differences aside long enough to fix their planet?
They must or face extinction.

My love for writing began when I was 14 and I wrote short stories about meeting my favorite music group. I received so much praise and complements on my stories that it quickly became a passion of mine. Throughout the years I have gotten humbling praise from peers, professors, and professional author’s that I've had a chance to work with.The White Warrior Series is my debut fantasy series that I'm publishing as an independent author. This series will consist of seven books total when completed.I also have an epic fantasy out called "Frost Burn" which I co-authored with K.T. Munson. I've also begun several other novels that will be published eventually, but it always comes down to time and money that goes into self-publishing books.My current projects include:The rest of The White Warrior Series (always.) "The Blur." A sci-fi fantasy which is turning out REALLY cool. :D"Lights Fall" an urban fantasy."Slaves of the Sand Painter" a desert fantasy. I have a few other stories waiting in the wings that I will hopefully get to some day.