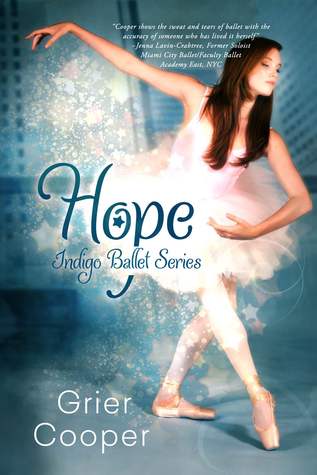 BLURB from Goodreads
Perfection. Beauty. Pain. For Indigo Stevens there’s no such thing as weakness or privacy at the famed New York School of Ballet where every movement is scrutinized and judged. Indigo hopes she’ll be chosen for the company, but her ballet teachers aren’t talking and their silence is confusing.

When Indigo is singled out for a coveted solo she feels her dreams are finally within reach, until she discovers she’s dancing with Felipe Gonzalez, the school’s smolderingly hot rising star. In the days that follow, Indigo questions everything she thought was true and finds herself making surprising choices, including the decision to take control of her own future. Will she create the life she wants or lose everything?

Could you tell us a little about your Indigo Ballet Series?
Indigo Stevens wants nothing more than to be a professional dancer. She dreams of dancing with Manhattan Ballet Theater but having talent isn't enough. Indigo must dig deep and use her inner resources to navigate the competitive, critical world of ballet. Her ultimate challenge: How do you live your dreams without losing yourself?

Could you tell us a little about Hope, book 2 in the Indigo Ballet Series, and if you had to summarise it in less than 20 words what would you say?
Perfection. Beauty. Pain. This is life for Indigo Stevens at the famed New York School of Ballet, where there’s no such thing as weakness or privacy and every movement is scrutinized and judged. Indigo hopes she’ll be chosen for the company, but her ballet teachers aren’t talking and their silence is confusing.
When Indigo is singled out for a coveted solo she feels her dreams are finally within reach, until she discovers she’s dancing with Felipe Gonzalez, the school’s smolderingly hot rising star. In the days that follow, Indigo questions everything she thought was true and finds herself making surprising choices. Will she create the life she wants? How do you live your dreams without losing yourself?

If you prefer, the 20-word summary goes like this: Dancer hopes she's chosen for the company...paired with distractingly hot partner...makes surprising choices. Are they the right ones?

Which of your books in the Indigo Ballet Series were easier/harder to write than the others? And why?
Wish was definitely the hardest book to write because it was the first in the series and my first novel. Although I'd written other titles before, there was a learning curve. While working on Wish I learned I'm a plan-ahead type of person, especially with writing. I created outlining forms, character sketches, collages and all the prep materials I continue to use for all of my books, and I continue to learn new techniques all the time. That's the cool part about writing: you get better with each passing day...and it's something you can do the rest of your life (unlike ballet!)
How many books do you plan to write in the Series?
The Indigo Ballet Series is a planned trilogy, but an additional novella is in the works. I'm also working on audiobook versions of the series, which will be available later in the spring, through Audible. Audiobooks are a whole new way to share stories and lots of fun to put together.

Do you have a favourite out of the Indigo Ballet Series that you have written so far? And if so why is it your favourite?
Hope is my favorite so far....probably because it's set in New York City, the place where I was born, and the place where I developed as a professional dancer. It's been my experience that many people are infatuated with New York City, for good reason. There's so much going on there, 24-7. There's a reason they call it “the city that never sleeps”...because it's the truth! You can go out for a meal anytime, day or night, you can have sushi delivered to your door (as Indigo and her friends do in one scene), and there is a wealth of magical places to explore, like Lincoln Center. I had a lot of fun revisiting these memories and adding pieces of them to the story.

Do you have a favourite character from the Indigo Ballet series? and why are they your favourite?
I relate to Indigo the most; she has a lot of heart and isn't jaded like some of the other characters. She's also talented enough to have a career with a good ballet company but doesn't succumb to the competitive environment by becoming cruel. That's not an easy thing to do and requires inner strength and character.

Where do you get your book plot ideas from? What/Who is your inspiration?
Even though a lot of people dream about becoming ballet dancers, very few actually get to do it. I wanted to share my experiences with readers so they could see what life as a dancer is really like. I came to New York City when I was fourteen, leaving my home, my family and my friends behind after I received an invitation to become a full-time student at the School of American Ballet. New York City has long been associated with glamour and all of the perks that come with a big city lifestyle; it's also one of the most major hubs in the world for the arts, which means anyone who's serious about a dance career knows they need to be there. My years in New York were an incredible time of growth for me, both as a dancer and as a human being, a pivotal period that shaped so much of who I am today. There were fun discoveries, like finding the best breakfast spots (especially the delicious super-sized muffins at the deli two blocks from my apartment), trying coffee for the first time (hated it–although it's a very different story now), and exploring the city with friends during rare free moments. It was a glorious inspiration to walk past Lincoln Center most days and dream about dancing with New York City Ballet some day. Occasionally I got to attend performances of New York City Ballet when I worked at the gala events. Those evenings, everything in life felt magical. Wealthy patrons shimmered in exquisite gowns, the top dancers of New York City glittered like the stars they were, and the Lincoln Center fountain sprayed liquid diamonds all night long.
When I started writing the Indigo Ballet Series, I knew these were things I wanted to share with readers. Even though it's been many years since I experienced that part of my life, most of it lives on in my memory in crystal-clear detail.

How do you come up with the Title and Cover Designs for your Indigo Ballet Series? Who designed the Cover of your books?
I usually come up with titles after a brainstorming session. Every now and then I draw a blank, so I use a working title while I write. I keep asking myself, “What is the right title for this story about _______” until the idea comes. It always does, sooner or later. I usually double-check with friends and the teens in my life to make sure it's a good fit and makes sense.

In terms of cover design, I got very lucky when I found my cover designer, Fiona Jayde. She makes amazing covers, and has a really great sense of color and design. I had created a series of studio photographs of the cover model, Colette, because I knew I wanted continuity on all of the covers...the same person appearing as Indigo. Colette and I had a lot of fun in the studio, but it required tons of costume changes since we created all of the images for the whole series that day. One the photos were ready, Fiona worked her magic with those images. I'm so pleased with the finished covers.

Is there anything in your Indigo Ballet Series books you would change now if you could and what would it be?
I wouldn't change anything! I'm having a lot of fun creating this series and looking forward to finishing new books, new audiobooks and other fun projects. HOPE is available now for pre-order and goes on sale April 26, 2016th. Click here to read an excerpt. Please stay tuned and stay in touch!


THE REST OF THE SERIES SO FAR 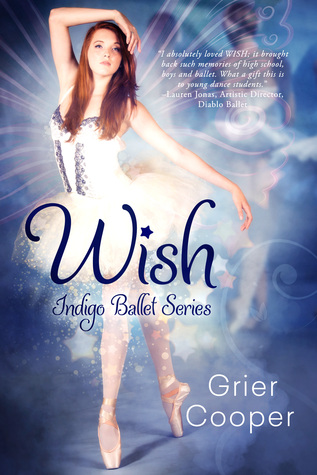 BLURB from Goodreads
For Indigo Stevens, ballet classes at Miss Roberta’s ballet studio offer the stability and structure that are missing from her crazy home life. At almost 16, she hopes this is the year she will be accepted into the New York School of Ballet so she can begin her ballet dance career. First she must prove she’s ready, and that means ignoring Jesse Sanders, the cute boy with dimples who is definitely at the top of Miss Roberta’s List of Forbidden Things for Dancers.

But Jesse is the least of Indigo’s concerns. When she discovers her mom is an alcoholic, it simultaneously explains everything and heaps more worry on Indigo’s shoulders. As her mom’s behavior becomes increasingly erratic, Indigo fights to maintain balance, protect her younger brothers from abuse, and keep her mother from going over the edge. But life with an alcoholic parent is unpredictable. When the violence at home escalates, Indigo realizes she can no longer dance around the issue. At the risk of losing everything, she must take matters into her own hands before it’s too late.
Goodreads Link