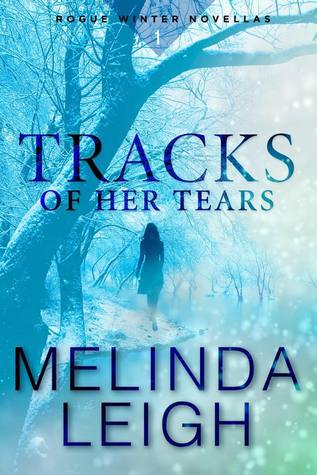 INITIAL THOUGHTS
Being totally up front here I admit that "mystery" is not a genre I read a lot of. I would say I aren't patient enough to be a big fan of mystery. I thought this would be ideal as the "mysteries" would be solved quickly as this is a novella! I also enjoy books or series that are either co-written or individual books in a series written by different authors. I am in the mood for a quick read and am hoping this fits the bill well!

REVIEW
Well I did receive this novella, Tracks Of Her Tears by Melinda Leigh the first in the Rouge Winter Series, and also the second one in the series (Dead In Her Tracks by Kendra Elliott) via Netgalley for free in exchange for my honest review and I had downloaded them. Sadly when I tried to find them on my kindle, I couldn't find them. I'd really got myself excited for trying them so I also purchased them from Amazon.
The cover of Track Of Her Tears features perhaps a forest or woods with a woman walking away on it. The colours on the cover are wintery, pastel blue that gives what I would call a mystical or afterlife feel.
Would this cover make me pick the book up from a bookstore shelf? Yes, it would. Being totally honest about how I came to read this book, it was the cover that caught my and and drew me in to want to know who the woman on the cover was.
The book is set in what is described as "sleepy little Solitude" Oregon. Upon reading the book I'd say it's the type of place that is a close community. Seth works for the police force, his wife Carly is a social worker, they've had their rough patches with both of them being accused by the other of always being at work etc. They have a seven year old daughter called Brianna. They live in a cabin style home on the farm that belongs to Carly's family.
The major plot of the book begins with Seth Harding, part of Rogue County's police force pulling up in his cruiser to a crime scene, possibly murder scene thinking to himself that " death never takes a holiday" which is sad but totally true! especially in this case. Though it's almost Christmas here he is about to talk to the medical examiner to get information on the dead female body that has been found by three teen boys. The initial information Seth is given is that the body is female, has been dead between 6 to 12 hours, and has no identification on her. The cause of death is possible strangulation and the victim had fought for her life. The medical examiner hope that there is DNA under the females fingernails to help them find the culprit. Seth is shown over to the body and is asked to help turn the body over. Seth is certainly unprepared for the shock of who the victim is. The female is Amber Lynn Cooper and is dating his brother in law Bruce. Seth immediately attempt to call Bruce, but there is no answer.. Though Seth knows Amber was dating Bruce he can't seem to remember any other important facts about her. Seth goes to her apartment to look for any clues as to who or why someone would want her dead. It's whilst Seth is at the apartment that he meets Ethel Kaminsky, the kind elderly neighbour who has been babysitting Amber's little daughter Charlotte. Ethel produces a spare key to Amber's flat which Seth uses to gain entry into the flat. Once in the flat, Seth discovers it has been literally ransacked. Ethel is concerned about who will care for baby Charlotte but Seth reassures her he has called his wife Carly as she works in social services and she will take care of Charlotte. Carly takes Charlotte home with her and begins the process of finding out who is her next of kin and if they are suitable and capable to care for Charlotte.
Everyone is shocked about Amber's death and of course worried sick as to where Bruce is. Seth retraces the steps that Bruce and Amber had taken the night before. The community comes together helping in the search for Bruce.
To begin with this novella felt a little slow in pace for my taste but it did gradually pick up the pace as I read on. There is quite a lot going on in this novella. We learn about Seth and Carly's marriage how they endeavour to make more time for each other as well family time with their daughter. Then in turn we follow Seth as he works at unraveling Amber's death. We also follow Carly as she attempts to find a relative that is capable as well as suitable to take in and raise Charlotte as amber would have wanted.
So did I enjoy the novella? I found it a little more difficult than I expected to get going into the novella. Once I was drawn in I did enjoy it.
Would I recommend the novella? Yes.
Would I want to read more of the novella's in this series? I do intend to reading Dead In Her Tracks by Kendra Leigh in the future.
Would I want to read more books by Melinda Leigh? After reading this novella I will be checking out other books by this author.

FINAL THOUGHTS
This novella reminded me a little of the Serenity's Plain Secrets series by Karen Ann Hopkins, it was the type of area the novella was set in and the whole community helping in the search for Bruce that made me make the comparison.