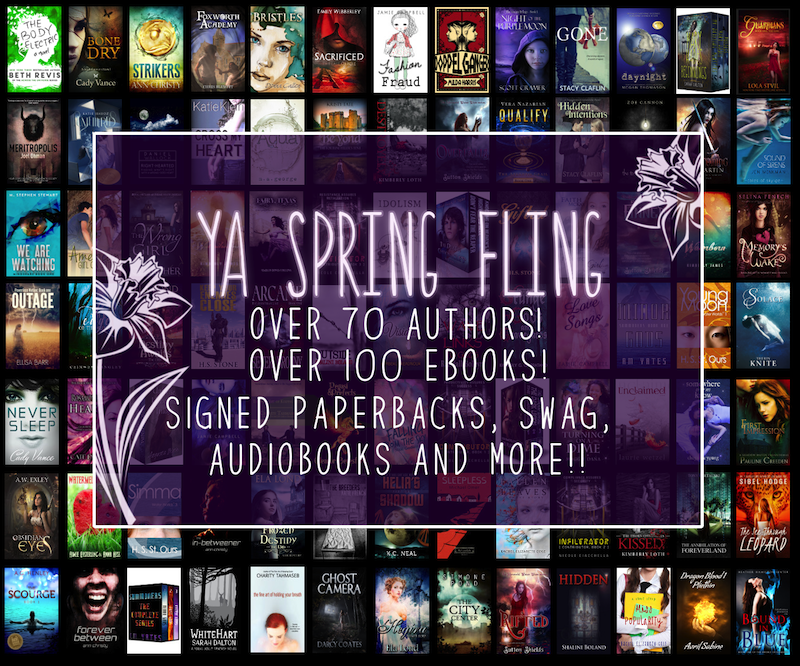 Q & A with the organiser – Sarah Dalton

How can readers enter the YA Spring Fling giveaway?
Head over to my website Sarahdaltonbooks.com and find the page for the YA Spring Fling (handy hint, it’s HERE). Once you’re there you can browse through the books on offer, or check out more information about the participating authors.

You should see plenty of links prompting you to enter the giveaway. Simply fill out the Google document telling us which books you’d like to win, the format you prefer, and whether you would also like to win paperbacks and swag. It’s that simple. Pick the books you want and sign off.

How will I know I’ve won?
There are so many books on offer that I’d be surprised if you didn’t win something! So you will be hearing from us.

After April 3rd, I will collate all the entries and pass them on to the participating authors. They will then choose the winners at random and Email the winners to let them know the good news.

Will my Email or personal details be used outside the giveaway?
Absolutely not. We’re all against spam and promise not to use your Email for anything other than contacting you as a winner. If you joined up to the YA Spring Fling mailing list you will receive one Email telling you the giveaway is open, and another warning you it is about to close. That’s it!

Is the giveaway open internationally?
Yes! But there are some paperbacks on offer that are region specific. Not all of our authors are sending paperbacks and swag internationally, purely because it costs us so much money and we ain’t made of it.

We will ask for your country of residence in the Google document. That’s so we can work out the winners for region specific paperbacks more easily. Everything else is open internationally.

GOOD LUCK EVERYONE! MAY YOU WIN MANY BOOKS!

As most people that drop by my blog regularly will have by now realised, dystopia and post apocalyptic are two of my favourite genres,so I just had to choose to spotlight dystopia for this fantastic YA Spring Fling Giceaway!
Here is a sneak peek of some of the books involved in the giveaway. 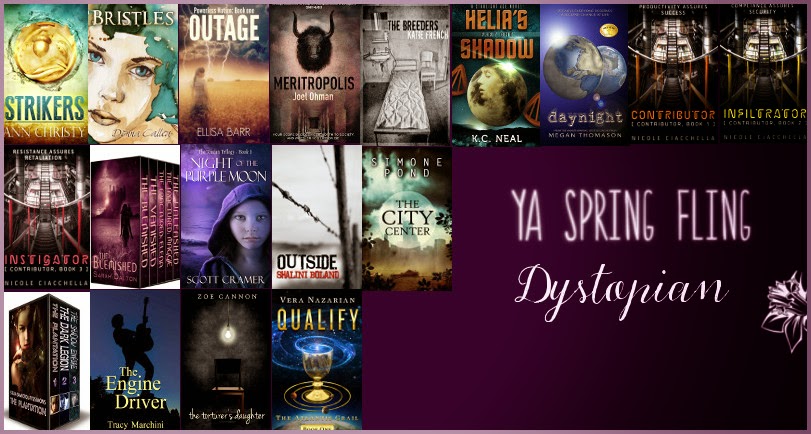 All these and more are featured in the YA Spring Fling giveaway.
Click here to win free books!

Strikers by Ann Christy
One hundred and twelve years after the fall, the Republic of Texas is built on two foundations: total freedom and total responsibility. A law broken means a strike against the lawbreaker. Five strikes means execution. The only hope for the law breaker is to escape Texas—to go Striker—before justice comes for them. Now, it's Karas and friends who must Strike or die.

Find out more
About Ann

Bristles by Donna Callea
Humiliated, subjugated and dubbed Bristles by her stepmother, Bryssa yearns to be free. But fleeing the dystopian city-state of Erba to seek her late mother’s magical homeland means leaving behind the boy who loves her, bristles and all.  And returning means putting everything she's gained at risk.

Find out more
About Donna

Outage by Ellisa Barr
After a terrorist attack destroys the U.S.'s power and communication grids, 15-year-old Dee must learn to survive despite disease, lawlessness, and the end of the world as she knows it.  Written for all fans who love apocalypse stories, Outage mixes useful survival tips with an action-packed story.

Find out more
About Ellisa

Meritropolis by Joel Ohman
In Meritropolis everyone is assigned a numerical Score that decides their worth to society and whether they live or die. After a young boy is killed because of a low Score, his brother plots to take down the System.

Find out more
About Joel

The Breeders by Katie French
Sixteen-year-old Riley Meemick is one of the world's last free girls. When Riley was born, her mother escaped the Breeders, the group of doctors using cruel experiments to bolster the dwindling human race. Now they're hunting Riley.

Find out more
About Katie

Helia’s Shadow by KC Neal
When the aliens arrived, they were hailed as the saviors of a dying Earth and dwindling human race. But the aliens didn't come to help. Now, one human girl's ingenious invention and one alien boy's awakened heart are humanity's last hope.

Find out more
About KC

Find out more
About Megan

Contributor, Infiltrator and Instigator
by Nicole Ciacchella
When 17-year-old Dara learns she's been chosen for an elite apprenticeship, she's thrilled at the chance to prove herself. Until she realizes a horrible truth: once you've outlived your usefulness as a Contributor, you're discarded.

Find out more
About Nicole

The Blemished: Complete Boxed Set by Sarah Dalton
A beautiful world comes at a price...

The Blemished is a frightening take on a fractured future where the Genetic Enhancement Ministry have taken control of Britain. It will take you on a ride filled with adventure, romance and rebellion.

Find out more
About Sarah

Night of the Purple Moon by Scott Cramer
Abby is looking forward to watching the moon turn purple, unaware that bacteria from a passing comet will soon kill off older teens and adults. She must help her brother and baby sister survive in this new world, but all the while she has a ticking time bomb inside of her--adolescence.

Find out more
About Scott

Outside by Shalini Boland
A post-apocalyptic romance thriller.
The world of the future is divided by Perimeters: high-security gated communities where life goes on as normal. If you’re inside you’re lucky, if you’re outside life expectancy takes a nose dive.

Find out more
About Shalini

The City Center by Simone Pond
Book one kicks off Ava’s journey as she fights for independence from her nemesis, Chief Morray, the tyrannical leader of multiple city centers that breed and control human life.

Find out more
About Simone

The Plantation Series: Books 1-3
by Stella Samiotou Fitzsimmons
In a world come to an end, one girl and one ragtag group of teen slaves find each other in the dark woods. They plan to make a stand.

Find out more
About Stella

The Engine Driver by Tracy Marchini
Sixteen-year-old Brig has never been allowed to hear a sad song in her entire life.

Like everyone else in her community, the personal Playlist Treatment Plan that plays in her head is designed to control her emotions - from when she's happy or sad, to when she falls in love. But for Brig, who suffers from depression, a song in a minor key will never be played.

When her friend, Annaby, is chosen to go to Musician’s School and is given a Permit to Carry a musical instrument, Brig knows that she has just this one chance to hear a sad song, a love song – or a song that matches what her depression feels like, instead of what her feelings should be.

Find out more
About Tracy

The Torturer’s Daughter by Zoe Cannon
Becca has never questioned what she's learned in Citizenship class: dissidents want to tear the country apart, and people like her mother are the only thing keeping them at bay. Until her mother executes Becca's best friend's parents as dissidents, and Becca learns a secret that changes everything....

Find out more
About Zoe

Qualify: The Atlantis Grail, Book One
by Vera Nazarian

In 2047 an asteroid is hurtling toward Earth, and the descendants of ancient Atlantis have returned from the stars to offer humanity help. But they can only save a tiny percent of Earth’s teen population. To be chosen, you must Qualify, or you die. Sixteen-year-old Gwen Lark is a klutzy nerd but determined to Qualify and rescue her entire family by competing in the brutal Games of the Atlantis Grail -- against impossible global competition—including sexy Logan Sangre. A high-octane dystopian SF teen adventure.

Find out more
About Vera