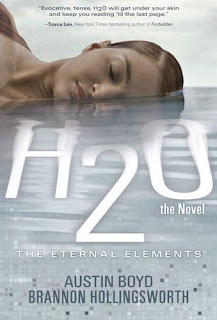 
BLURB from Goodreads
H2O is a contemporary crossover women’s novel that tells the story of Kate Pepper, a successful young business woman in Seattle whose life is suddenly—and strangely—turned upside down. Unexplainable visions torment her every time she gets wet. Sinking into despair, frantic to avoid water at any cost, Kate ultimately finds romance and redemption through the advice of simple people who love her for who she is, not what she was.
Kate Pepper has it all . . . a razor-sharp intellect, perfect health, stunning beauty, a wildly successful career, and all the money she can spend. Or rather, she thinks she has it all.   Despite the perfect shell, there’s something dark inside Kate. Terrible visions send her into a deep depression and her world crumbles. All her business savvy and elite connections don’t make a difference; she has lost control.Who will save her? Xavier, her predatory boyfriend? Or Candice, the Down syndrome waitress at her favorite coffee shop? At the bottom of her dark well, desperate to get out of the water, there’s nowhere to reach but up.   H2O—a fascinating allegorical look at success,sanity and spiritual redemption in a young woman’s relationship with water.

MY REVIEW
First of all I love the cover, it makes you want to know more about the book. So just as a great cover should do, this one draws you in.
I don't really know why as it doesn't suggest so in the blurb, but I had thought this book would have some sort of paranormal elements to it.......it didn't.
For anyone that has read my review policy you will know I actually state I do not review religious books, however I asked one of the authors direct if I could review this book. I have to say its not the easiest read but with a little perseverance it is well worth reading and quite enjoyable.
The central character Kate Pepper works for her boyfriend Xavier, and lets just say Xavier is the type that takes Kate totally for granted and when anything goes wrong at home or at work she is the first in the firing line of insults and nastiness. I think that Kate accepts this treatment as she doesn't believe she is worth anymore. Though even the quieter, less confident people can only be puched and trampled on for so long.
Kate has a problem, she has these visions, they start infrequently and fairly mild so much so Xavier asks her if she's pregnant! The visions and fainting etc continue, Kate finally realises that the visions come to her every time she touches water, that's drinking, washing, and even getting caught in the rain! I don't want to give away much more of the story but after hitting rock bottom, losing her job and boyfriend....(though in my opinion losing the boyfriend is not a bad thing for Kate) Xavier is quite a selfish, nasty piece of work really!
Kate turns to the one thing she knows......her laptop and the internet! Kate creates a program to search for others with her problem and possible help.
Kate ends up internet chatting to someone who she presumes is a guy, though she doesn't actually know for sure. the "guy" suggest someone may be trying to send her a message within these visions, some higher person..........
We get a deep insight into Kate's past a mistake she made before she left home. Will she ever come to terms with it? She comes into contact with people who wish to help her for nothing in return along her way.
As I said I did find parts of the book harder going than others, however I read all the book and I did enjoy Kate's life journey.
So would I recommend it? To the right person yes! Would I read it again? Probably not but then I do usually only read books once anyway.