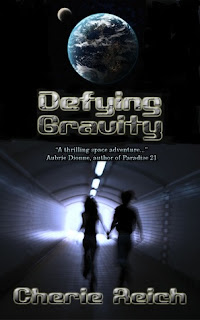 
A Futuristic Space Fantasy Novelette Homesick upon the SS Perseid, Linia, a young linguist, thinks she signed up for a mission of peace, but her crew members have another plan: attack the planet Medusa. Bored with his dying planet, Alezandros, a space cruiser pilot, joins the Medusan Army in his quest for adventure. When the SS Perseid clashes with the Medusans’ space cruisers, Alezandros and Linia’s lives intertwine. Sucked through a wormhole, they crash upon a post-apocalyptic Earth and are captured by cannibals. In adjacent cells, Alezandros and Linia cast their differences aside for a common bond: escape. But when romantic feelings emerge between them, they might do the unthinkable because for a Medusan and a Persean to fall in love, it would defy gravity.

I would classify this novelette as Sci-Fi. The "people" in this novelette are all different species. Linia is a linguist, she is of the Persean race who has been given her first mission which she thinks is one of peaceful exploration but is she being lied to? There is a crew of ten including Linia on her spaceship.
Alezandros has recently joined the army of his planet. His race is called Medusan's. He is sent to protect Medusan from any attack from the Persean's.
The story see's the Persean linguist Linia and the Medusan army man Alezandros having to join forces when their ships crash and they are taken hostage but mutually hostile forces.
So Linia and Alezandros become closer but, can their relationship survive as Alezandros will not be welcome on Persea and Linia will not be welcome on the Medusan Planet. And even if they solve that problem can they even escape the hostile old earth people that have captured them?
This is quite a short action packed sci-fi novelette. It has inter racial squabbles, betrayal within the races and also has a potential romance. It is quite descriptive but also complex too. I did enjoy reading this and would like to read on through the series to find out what happens to Linia and Alezandros as well as their respective races.
So did I enjoy it? Yes, Would I read more? Yes Would I recommend? Yes,stressing the point that this is a novelette not a full length book.

( A Novellette is longer than a Short Story but not as long as a Novella )
Posted by Jeanz xx at 13:00