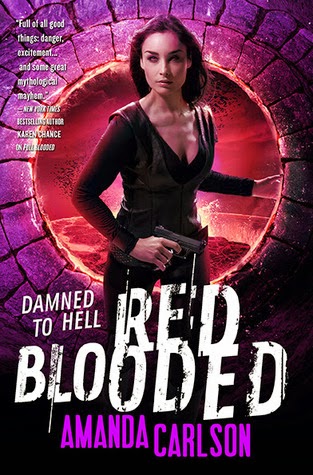 BLURB from Goodreads
After Jessica's brother is kidnapped and taken to the Underworld, she will stop at nothing to get him back. But before her grueling training is finished, Jessica's power mixes unexpectedly with the circle and she's dropped into the Underworld without protection or her escorts.

INITIAL THOUGHTS
Approaching this book I was truly looking forward to it. I was certainly ready for some more kick butt Jessica McClain, her purrrfect mate Rourke, James and Marcy, Tally and Maggie and more. Though Jessica and Rourke are the "main characters" I also love the other characters too.

MY REVIEW
So I was super lucky to receive a paperback and e-book of this title in exchange for my honest review. I love the book cover, it fits really well with the rest of the series so far, which I do like. The female on the cover is the kick butt main character, Jessica. I'd say the circle is there to represent the witches circle as certain characters have to travel through to get to Hell.
There's the words "Damned To Hell" which is quite literally what has happened to Jessica. I usually hate recommendations on the front covers of books but this one is done well and it is by Karen Chance too!
So the rather short blurb explains what the book is about perfectly and concisely. Jessica's brother Tyler was kidnapped in Cold Blooded and taken to the Underworld.
So would I pick this book up in a bookstore shelf purely because of the cover? Oh yes!
Jessica is obviously eager to go rescue her brother but acknowledges the fact that she needs to be prepared for what she will meet when she gets there not to mention learning how to use a witches circle to travel there. Jessica also need to learn how to control her newer manifesting powers. /a decision is made as to who will accompany Jessica to Hell to help in the rescue of Tyler. In the meantime the head of the Witches Coven, Tally is helping Jessica, trying to teach her how to use the magic within her. On one such training session with Tally, Maggie blurts out that the "kitty is going to be so mad" (Maggie calls Jessica's mate Rourke, Kitty) and then almost instantaneously Jessica is sent through the circle alone and straight into the Underworld. Though Jessica's main objective is finding and rescuing her brother Tyler she will also have to deal with all the demons she meets along the way as well as The Prince Of Hell himself who still wishes to put her on Trial for killing a low level demon. The "crime" Jessica committed is quite a trivial one which makes her wonder what else The Prince Of Darkness may be up to. Upon arriving in Hell, Jessica discovers that the sun in hell burns her skin, so its very convenient that she can regenerate and heal herself. After an encounter with chupacabra's, squealing pigs and low level demons Jessica finds herself in a maze of extraordinary tunnels. Some of the tunnels seem like they have flint glittering contained in  them and others look to have veins pulsating within them. Jessica soon finds herself being chased and ducks into a room that is holding a strange demon-like women prisoner inside it. Jessica ends up realising she has no choice but to put her trust in this new acquaintance who is reluctant to reveal her name. Who is the mystery prisoner? Will Jessica find Tyler and manage to rescue him? What will happen if she stands trial? So many questions, the answers to which are in the book, ready for you to discover. As always with books by Amanda Carlson this one is action packed, drama filled and a breeze to read! This book is centered more on demons and witches, but returns to pack matters at the very end. I really liked the new characters that were introduced to us, the reader, in this book, such as the Princess Of Hell.  Fate also plays a great part in this book, with the historical scriptures being quoted by various characters in the book. We also learn more about "The Coalition" and the fact it is made up of representatives from the five races. I think the coalition will come more to the forefront in the books that follow this one. There are also plenty of kick-butt action for Jessica and her pack. The book ends with worrying about the "man-made" wolves. In fact most of the pack are somewhere in the Everglades. So Jessica and her pack return from their "hellish" journey to go right to another problem. And it is that state of worrying about her father and the pack that we leave Jessica in. Talk about a cliff hanger!
So did I enjoy the book? Once again, totally loved it. Would I recommend the book? I would yes! I can honestly say I have read and loved every book in this series so far!           Would I read more in this series?  Definitely I'd read Pure Blooded if it was available right now! Would I read other titles by Amanda Carlson? Yes, I am reading and enjoying her Sin City novellas too.