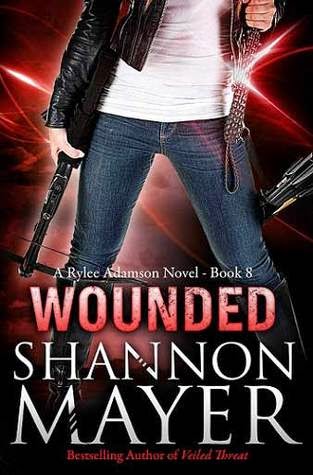 BLURB from Goodreads
"My name is Rylee and I am a Tracker."When children go missing, and the Humans have no leads, I'm the one they call. I am their last hope in bringing home the lost ones. I salvage what they cannot.The clock is ticking and I can feel the weight of the final battle with the demon hordes looming over my head. The puzzle pieces are becoming clearer, but the casualty list is growing. And with each name that is added to those we've lost, my confidence cracks a little more.Yet there is hope.A child saved.A life lost.A prophecy fulfilled.

EXCERPT
“You don’t think that all of the disasters that humanity has faced were all natural, do you? The bubonic plague is a good example. It was blamed on a number of things. Rats, the Jewish people, punishment from God. It all led to a cleansing of anything unusual. Mostly supernaturals, who were trying to blend in, and in that process the humans wiped out many of their best defenders against the demon population, which then went on to spread the plague across the world. But that is just one example.”
“What was the point though, wouldn’t the demons have wanted people to be alive so they could possess them?” Liam asked.
Erik gave a ruthful smile. “Yes and no. The bubonic plague wasn’t so much about killing people off, as it was infecting them. Making them weak and easier to possess. The plague compromised their immune systems, allowing them to be taken over. Especially the young.”
Something about what Erik said sent a twang through my brain. I struggled to put the pieces together that floated just out of reach. Damn it. Liam touched my arm. “What?”
I closed my eyes and pressed my palms into them, blocking out any light. “Just let me think for a minute.”
The feel of the night air and the sound of the fountain filled my ears as I looked at the pieces one by one.
Demons escaped in London who bred fast.
Minor supernaturals were being possessed by lesser demons and evil spirits.
Packs of Orion’s demons were free to cause chaos.
The only thing we were missing was a plague and then Orion would have access to all the young people he wanted. The urge to vomit swelled up through my stomach and burned the back of my throat.
“Children are normally hard to possess, aren’t they?” That was why it had taken a full pentagram when the black coven was trying to have India possessed so many months ago. At least, that was what I understood.
Bert bobbed his head. “Yes, it can be very difficult to possess a child. There is a natural protection over the young when it comes to demons, something the elementals put into play.” He grimaced as he said ‘elemental’ and again I wondered at these particular supernaturals that I’d only just been hearing about. “But when the small humans are ill, that protection goes into keeping them alive, rather than keeping them from being possessed.”
Feeling like a bully, but not really caring, I leaned in to Bert. “How did the bubonic plague really start?”
An interesting thing happened. Bert paled and shook his head. “I can’t tell you.”
My eyebrows shot up and I glanced at Erik. “You want to make him talk, or do you want me to make him talk?”
Erik shrugged. “Either way is fine. I haven’t interrogated a demon in years. I’ve missed it.”
Bert paled even more and his lower lip trembled. “I can’t tell you. I can’t. Tracker, Slayer both of you have to trust me. Please.”
“Begging will get you nowhere, little demon.” Erik growled. He had a short, serrated knife in his hand that he’d pulled from somewhere within his robes. It was curved, like a skinning knife, and if it hadn’t been for the rough edges that’s what I would have called it.
“Track demons and evil spirits.” Bert blurted out as he fell to his knees. “Proof I am on your side. Track them; you’ll see it isn’t me fooling you.”
Erik paused and looked over at me. “Up to you. Personally, I’d just as soon dice him up.”
“Fuck, why not, Tracking will take me two seconds.” I grumbled.
I send out a thread to Track demons as a whole, paired with a thread for evil spirits, just to satisfy—
Holy. Fucking. Hell.
I swayed on my feet and went to one knee, the overwhelming wash of pings I got back seriously making me re-think getting out of bed the day before.
We were surrounded by Orion’s minions.
Hundreds of them. 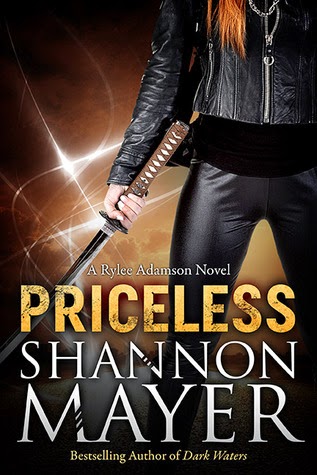 BLURB from Goodreads
I’m on the FBI’s wanted list.
I have a werewolf for a pet, a Witch of a best friend, and have no need for anyone else in my life.
But when a salvage starts to spin out of control, help comes from a most unexpected direction. One that is dangerously dark, brooding, and doesn’t know a thing about the supernatural.
One whose kisses set me on fire. 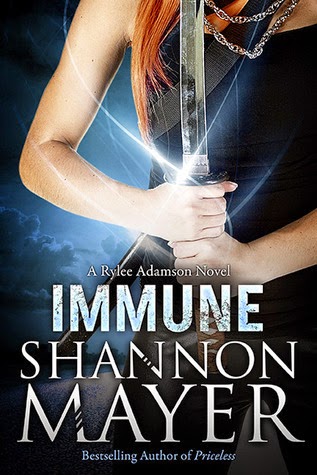 
Underestimating demons is a bad idea, and it’s a mistake that may cost me not only my own life, but the life of a missing child.
If I can swallow my pride, and allow Agent O’Shea to help me find a way to deal with the demon, we might be able to save the child.
With this salvage, it’s a race against time, a test of trust, and a temptation that I'm doing my damnedest to ignore.If only swallowing my pride was that easy. 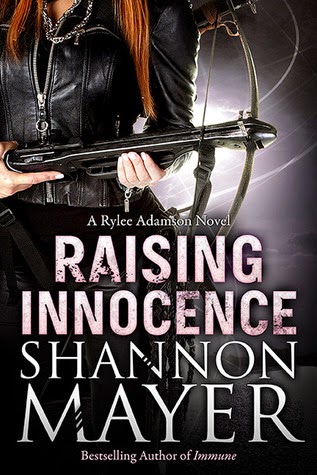 BLURB from Goodreads
The FBI wants me on their team. Bad enough that they are dangling bait they KNOW I can’t resist.

The catch? It’s on the other side of the ocean.

And if I want what they’re offering, I have to help them with a salvage gone terribly, terribly wrong.

But this time, I have no back up. I have no Plan B.

And I have no O’Shea. 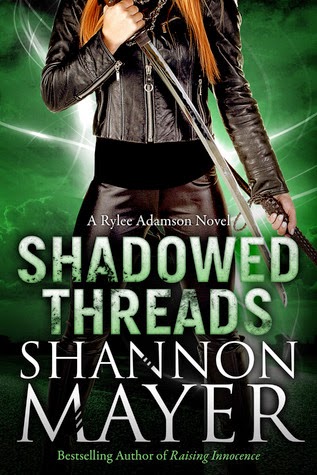 O’Shea is AWOL, and Tracking him is proving to be harder than I expected. Not to mention the small fact that I have the Beast of Bodmin Moor chasing me across Europe, in a race against the odds, and my life as the prize. But those things are minor compared to the secrets that finally come to light.Secrets I wish had stayed hidden in the darkness . . . BLURB from Goodreads
Crossing into Ogre country is dangerous when you're a polite, respectful gal. Which means I already know I'm in for a wild ride, despite the back up I've brought along.Even when things start to go sideways, and enemies close on us from every side, I still believe we have the upper hand.How very blind can one person be when it comes to a salvage?I'm about to find out. 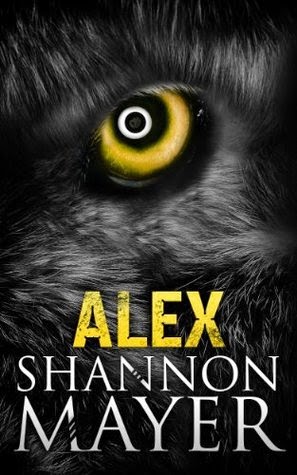 BLURB from Goodreads
It's mine. Before I lost my ability to think like an adult. Before my body became stuck between wolf and human. Before I knew the supernatural and Rylee even existed. This is the last of what I remember before becoming a werewolf. . . .this is the last of what's important to me. And the moments I fought so hard to hang on to. My name is Alex, and this is my story.

Haven't read any of the Rylee Adamson books? This short stands alone and is a great intro to the characters. 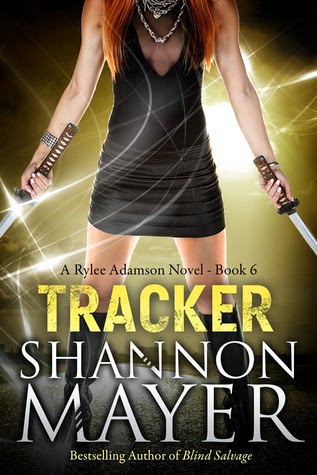 BLURB from Goodreads
Bringing my allies together as war approaches is my number one concern. But that means I have to play nice with a vampire who is blackmailing me. If I don’t, I’m screwed and my family is dead.But I don't play nice. And I have a backup plan. Kinda.Throw in some new weapons being developed that work around supernaturals and I have more problems than I can handle on my own. Good thing I have a kick ass team.Even if they are on the other side of the world from me. 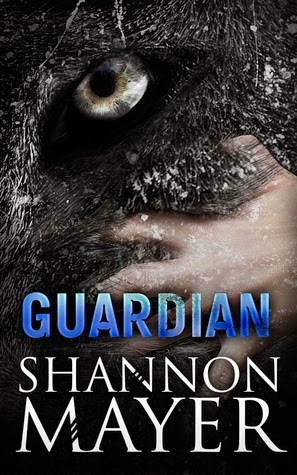 BLURB from Goodreads
After months of danger, running for my life, and dealing with one crisis after another, I'm finally getting that vacation I deserve. I even get to take my favorite guardian with me for some serious one on one time.Of course, when it comes to my life, even a vacation can turn ugly.And when I say ugly, I mean monsters, magic and death. Just another day in the life of a Tracker...... 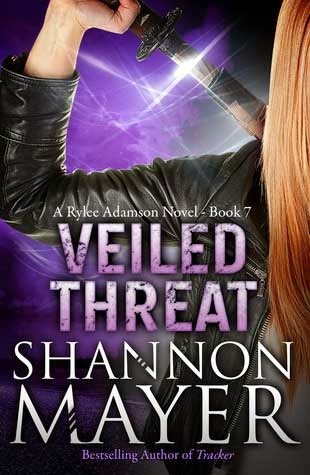 BLURB from Goodreads
Demons are putting rips in the veil in order to cross over and steal my friends and allies away.

But, going after them isn't even close to simple. The deepest level of the veil is not a place you can just open a doorway too, after all, and of course, that's where they've been taken.

As fate would have it, it looks like I might get some help from a trained demon slayer and his fire breathing ride.
The only problem? Said demon slayer claims to have family ties to me. And I've never trusted my family. 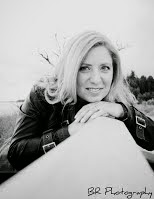 Shannon Mayer lives in the southwestern tip of Canada with her husband, dog, cats, horse, and cows. When not writing she spends her time staring at immense amounts of rain, herding old people (similar to herding cats) and attempting to stay out of trouble. Especially that last is difficult for her.

She is the author of the The Rylee Adamson Novels, The Nevermore Trilogy, A Celtic Legacy series and several contemporary romances.

OTHER SERIES BY SHANNON MAYER