BOOK PROMO & GUEST POST - WHO AM I? HOW MY DAUGHTER TAUGHT ME TO LET GO AND LIVE AGAIN BY MEGAN CYRULEWSKI 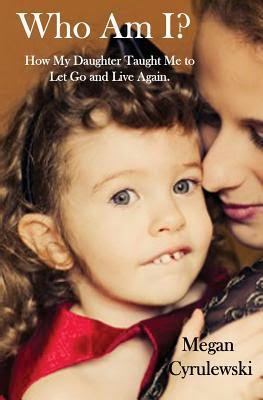 Title: Who Am I? How My Daughter Taught Me To Let Go and Live Again
Author: Megan Cyrulewski
Publisher: Black Opal Books
Release Date: 17th July 2014

BLURB from Goodreads
Megan Cyrulewski is an ordinary person who has faced extraordinary challenges and now wants to inspire people and show them that hope gives them the power to survive anything. Who Am I? is about her journey into post-partum depression, anxiety disorder, panic attacks, visits to the psych ward, divorce, domestic violence, law school, and her courageous struggle to survive with her sanity intact-and how a beautiful little girl emerged from all this chaos.

There is Nothing Wrong With You.  It’s All In Your Head.

I can't tell you how many times I have heard that phrase, "It's all in your head."  Yes, mental disease is technically all in our heads, but that's not the way people mean it when they say it.  "If you think positive thoughts, you won't be depressed anymore."  "You choose to be anorexic; just eat something."  "You just have the baby blues and you're a new mom; you don't have postpartum depression."

For those of us with a mental disease, do any of those sound familiar?  I'm sorry, but for those of you who are guilty for saying phrases like that, you are completely ignorant.  Why do people think it's okay to judge anyone who has a mental disease?  Unless they've been through it, they have no idea what it's like to literally be controlled by the disease.  Your support is needed; your judgment is not.

I've had people say to me that I should be lucky because at least I don't have cancer.  Seriously.  Unfortunately, people die from cancer.  Guess what?  People also die from mental diseases too.

I'm going to tell you about three people I met in the hospital and after reading about them, you tell me if mental disease is "all in our head."

There was a 14-year-old girl.  She hadn't slept in 4 days.  She wasn't on drugs.  She didn't drink.  In fact, she had never taken any medication for depression before she checked herself into the hospital.  So why hadn't she slept?  Because one of her friends failed a class at their very private and exclusive school.  Instead of telling his parents, he committed suicide by throwing himself off the roof of a house…right in front of her.  She decided, along with her parents, to seek help because she was afraid she might do the same thing if she ever failed a class.  How would you feel if you saw your friend commit suicide right in front of you?  Was her depression all in her head?

There was a woman who was bulimic.  She wasn't allowed to socialize with anyone of the floor except for group therapy time.  At the end of group therapy, we always did about 10 minutes of stretches.  She wasn't allowed to do those because the counselor was afraid she might pass out.  At mealtimes, she had to sit at the "eating disorder" table with a sitter.  She had a sitter with her 24/7.  Someone stayed in her room at night while she slept.  She wasn't allowed to close the door when she used the bathroom.  She wasn't even allowed to take a shower by herself.  She had to keep the shower curtain open while the sitter sat in a chair and watched her.  Do you think that's the life she chose?  To be ostracized by society even in the mental health ward?  Was her bulimia all in her head?

There was a woman who tried to commit suicide.  She had breast cancer.  In fact, while she was in the hospital, she was getting chemotherapy treatments.  Her doctor told her that the chances for survival were very good.  That same day, her husband decided to tell her that he had been having an affair and was leaving her for the other woman.  He said she looked ugly without any hair, which she lost during chemotherapy.  He also told her that she was disgusting when she vomited after a treatment session.  So he left.  She tried to kill herself.  How would you feel if your spouse of 11 years left you because you were "ugly" from cancer?  Do you think her suicidal tendencies were all in her head?

I've been in the mental health ward three times.  My ex-husband loves to shove this in my face as much as possible.  In every court motion, friend of the court meeting, basically every time he saw me, he always made fun of me.  The funny part is that the only person who thought it was a big deal was him.

You see, I'm not ashamed that I sought help.  I had postpartum depression.  I had a choice: I could try to work through it on my own and not take care of my daughter, or I could check myself into the mental health ward, get the help I needed and get back home to be with my daughter.  Guess which option I chose?  I truly feel that anyone who makes fun of those of us are the ones who need help but are just too cowardly to ask for it.  So instead, to make themselves feel better, they make fun of everyone else.

I know that 40 years from now, my ex-husband will still bring up the fact that I was in the mental health ward.  He will probably slip and fall on my driveway in the middle of winter and sue me.  In the lawsuit, he'll claim that I forgot to put salt on the driveway because I was in the mental health ward three times.  If I'm still blogging in 40 years, I'll let you know if I'm right.

You don't need to validate your reasons for seeking treatment to anyone.  Be proud of who you are and how far you have come.   So for those of you who have heard the phrase, "it's all in your head," just politely nod and walk away because the person who says that is not worth your time.  You have more important things to do.  You need to work on yourself to become the person who are meant to be.  You need to to be happy.  You need to rejoice at everything you have achieved in this beautiful world.  You need to live.

Thankyou to Megan for sharing the details of her book and the Guest Post, I found it very informative and as I suffer from Fibromyalgia  I can really identify with it.
Posted by Jeanz xx at 03:00