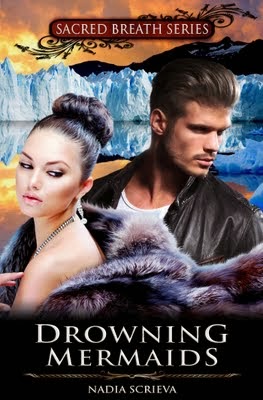 She is an elegant princess displaced from her home. He is a rough sea captain with a heart of gold...

To escape the war in her underwater kingdom, the noble daughter of a murdered king must flee to Alaska. Doing all she can to keep her younger sisters safe, Aazuria tries to assimilate and work among the Americans, with her feisty red-haired bodyguard at her side. This refuge holds pleasant surprises, for the princess meets a somber gentleman in a dark corner who promises to show her his world.
Trevain Murphy is a successful crab fisherman who has spent his life building an empire above the sea, but knows nothing of the greater empire beneath the surface. When a graceful dancer captures his attention, he becomes fascinated with her old-fashioned speech and unique mannerisms. Learning that her father has recently died, he cannot resist extending his kindness in offering to guide and protect her.
As it becomes clear that the dark-haired woman is much more than she seems, Trevain is unprepared to uncover the staggering secrets behind her innocent facade. Neither the captain nor the princess can imagine that their lives will become forcibly entwined as a common enemy threatens both of their worlds...

ABOUT THE AUTHOR
Nadia Scrieva lives in Toronto, Canada with no husband, no kids, and no pets. She does own a very attractive houseplant which she occasionally remembers to water between her all-consuming writing marathons.