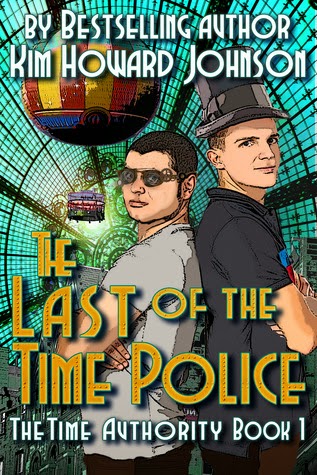 It’s "The Hitchhiker’s Guide to the Galaxy" meets "Time Bandits" in this action-packed science fiction adventure.
Stan and Jack are the last remaining members of the Time Authority, a government unit formed to correct disruptions to the established Time Line. Although time travel has been officially outlawed, Stan and Jack must make a quick time hop to 16th Century France to clean up some of their careless littering.Unbeknownst to them, however, Leonardo DaVinci stows away and tumbles out (along with the operating manual for the time machine) in 18th Century England. This disruption is discovered by the Time Authority, as it creates a Chronological Anomaly that begins advancing toward the future and threatens to wipe out all reality. The military and civilian leaders clash before agreeing on a scheme to build one final time machine and send Corporal Spumoni back to correct the Time Line, even though it may ruin any chance of Stan and Jack returning home.Stan and Jack must crash-land their time machine in 1848, where they discover, due to DaVinci’s influence, a futuristic Victorian England. After nearly colliding with Maggie Wells on her flying machine, she helps them hide their broken Time Hopper. Stan and Jack realize their only hope to fix their machine is to recover the operating manual, if it still even exists. But Special Services agents, led by Maggie’s former boyfriend James Burton, are constantly searching for them. And Jack’s growing attraction for Maggie is tempered by the thought that she could be his great-great-great-great-grandmother.By 1768, DaVinci has become a favorite of King George III of England. His only rival is Benjamin Franklin. Jealous, with the help of Lord Frederick North, DaVinci frames Franklin for the theft of his own notebooks. But when DaVinci learns Britain’s plans for his own war machines, he realizes he must work with Franklin to stop Britain’s domination of the globe.

Did it take a long time to get your first book published?
It was all deceptively easy. A writer friend recommended me to his agent, the agent had me write up a proposal, and he sent it out. One editor jumped at it on a Friday afternoon. Then I heard on Monday that he had died over the weekend! But another editor at another publishing house picked it up. Fortunately, he managed to survive long enough to get it in print.

What is the name of your latest book, and if you had to summarise it in less than 20 words what would you say?
The Last of the Time Police (The Time Authority, Book One) [That's practically twenty words alone, isn't it?!] How about:
Pythonesque adventure as the two least competent members of the Time Authority are sent back for a candy bar wrapper.

Do you have plans for a new book? Is this book part of a series?
The Last of the Time Police (The Time Authority Book One) is followed by the second part of the story, The Return of the Time Police (The Time Authority Book Two). I’m in the middle of writing the third book, which still doesn’t have a title. The whole story is a Pythonesque adventure about the two least competent members of the Time Authority, which is charged with correcting disruptions to the established Time Line. In the first book, Stan and Jack are sent to the past to pick up a candy bar wrapper, but in the process, they accidentally transport Leonardo DaVinci to Victorian England, where the government puts him to work. The result is a Chronological Anomaly that threatens to wipe out all reality. The story takes place simultaneously in three different centuries.

What genre would you place your books into?
They’re science fiction steampunk Pythonesque action-adventures in the vein of The Hitchhiker’s Guide to the Galaxy. Hope that makes it clear!

What made you decide to write that genre of book?
I think the genre was the result of the story I wanted to tell—the rest just happened! But I also dislike time travel stories that don’t make sense. They have to pass the logic test—could this actually happen? If Victorian scientists really learned the split the atom, there has to be a reason that doesn’t impact on us today, perhaps if someone had to go back in time and repair everything that happened...someone like a group of Time Police! Hmmm...

Do you have a favourite character from your books? and why are they your favourite?
The Last of the Time Police (and The Return of the Time Police) mixes fictional characters with real-life historical personages. Leonardo DaVinci and Benjamin Franklin have just as big a role in the story as Stan and Jack, and I loved being able to write them. But the most interesting real-life character, one that almost no one has heard of, is undoubtedly Samuel Warner. He invented the torpedo, but the mystery of his death inspired my story and several of my characters. In London’s Brompton Cemetery, there is a mysterious mausoleum that some people believe is actually a time machine. Seriously. I’m not kidding, look it up for yourself! It’s an odd structure built by Warner and Egyptologist Joseph Bonomi for a Victorian spinster and her daughters. I discovered their story early on in the writing, and they all became characters in my book.

I decided to use Leonardo DaVinci, who was inventing war machines and flying devices back in the 1500s after thinking “Suppose he had access to British technology a couple of centuries later to develop his inventions?” And so I began studying DaVinci and his world, and the world I was about to thrust him into. Who would he likely have encountered in London in the 1700s? And how would they have interacted? I decided to include, arguably, the first great American inventor and great mind, Benjamin Franklin, who happened to be in London during that period, and more research ensued. Finally, I came up with Stan and Jack, my two main characters, whose blunder resulted in DaVinci being pulled out of his own era. I even had to research the history of golf, for reasons that will become obvious to readers. I also had to navigate an impossible romance with Maggie, a very strong female character.

Where do you get your book plot ideas from? What/Who is your inspiration?
When I was mulling ideas for The Last of the Time Police, I recalled that back in the 1970s, Terry Gilliam had showed me some pictures of an alternative vision of Victorian London—it was steampunk before anyone had ever heard of the word. That certainly informed my story.

I was also inspired, in part, by Douglas Adams and The Hitchhikers Guide to the Galaxy. I knew Douglas—we never became close friends, but I knew him through the Pythons. My wife Laurie and I went to see my Python pal Terry Jones, who was doing a book signing in Chicago many years ago with Douglas. The four of us went out for dinner and drinks afterward, and had to be scolded by the management more than once because we were getting too loud, boisterous, and naughty.

Then, several years later, we were living in Santa Barbara when I was working for John Cleese. Douglas had likewise relocated to Santa Barbara, and we re-connected. I had only been there a few months, and had only had lunch with him once, when I got the news that Douglas had passed away, much too young. Very sad. But Douglas andHitchhikers Guide certainly had a lot to do with the tone of The Last of the Time Police.

Do you basic plot/plan for your book, before you actually begin writing it out? Or do you let the writing flow and see where it takes the story?
Many years ago, I studied improvisation with the legendary Del Close. In fact, I went on to co-write the improvisational manual Truth in Comedy, and even became Del’s biographer years later with The Funniest One in the Room: The Lives and Legends of Del Close. Del was the guru of longform improvisation, and taught just about everyone worthwhile, from John Belushi and Bill Murray to Tina Fey, Amy Poehler and Stephen Colbert. But the point of all this is that I learned to write improvisationally. It turns out that the rules of improvisation are much like the rules of good writing. For example, that’s how I learned to start scenes in the middle and eschew exposition.

I enjoyed writing this improvisationally, but I have since been told that I’m lucky to have gotten away with it. And so, sadly, I am learning the “proper” way to plot and structure. I’m told that once I do, the rest of the writing process will come much easier to me. We shall see...

And any other information you wish to supply?
In addition to all of my magazine writing, I’ve written non-fiction (The First 280 Years of Monty Python), I’ve written biography (The Funniest One in the Room), I’ve written memoirs (Monty Python’s Tunisian Holiday, about my life on the set of Monty Python’s Life of Brian in Tunisia), co-written an improvisational manual (Truth in Comedy), a graphic novel (Superman: True Brit) and other comic books. I’ve also co-written a YA novel (The Dare Club: Nita) with my wife, Laurie (who is the author of A Good Draw andBeyond Reach).