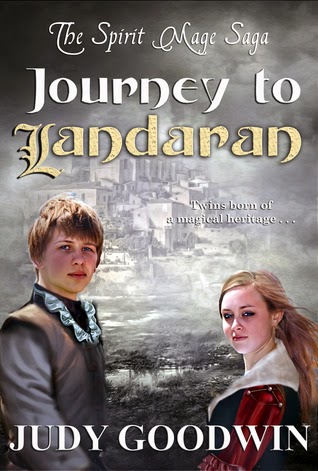 BLURB from Goodreads
Aidah and her twin brother Tavish have always had a knack for getting into trouble. From pie stealing and pranks to hunting for magical creatures, they have always escaped notice in their tiny mountain village.Until now.Aidah begins seeing visions through her brother’s eyes. He’s a Firestarter, gifted with the Talent to control light and heat, destined to become a Sun Mage in the great city of Landaran. But he doesn’t want to leave without his sister. As storm clouds gather, Aidah dreams of a beautiful man, a frightening man, calling to her.She fears the truth. That she may developing a Talent of her own, one that will change their lives forever.The power to read minds. To possess bodies. To travel inside dreams. In the world of Ernid, Spirit is the ultimate power.Nations will go to war over them

Judy Goodwin has been writing since she was a child, when her fourth grade English instructor told her, ‘You should be a writer.” She earned her Bachelor of Arts degree in Creative Writing from the University of Arizona, and a Master’s in Education from Argosy University. Over the last ten years she has appeared in several small press magazines and anthologies with her fantasy and science fiction short stories and poetry. Her first novel was published in January 2013, entitled Heart of the Witch.

When not working on her fiction, Judy works as a technical writer in a healthcare services firm. She enjoys bullying the sheriff at the local renaissance festival, volunteering at local charities, and catching up on the latest movies. She lives in Gilbert, Arizona with her partner and teenage daughter, four cats, and three small dogs.


Did you always want to be a writer? If not what did you want to be?
In my heart I’ve always been a writer; I used to make picture books when I was six years old. I wrote my first “book” in junior high, tossed that out, rewrote it in high school, then tossed that one out as well. If you include these, then my latest book is actually my fourth full length book written.

What is the name of your latest book, and if you had to summarise it in less than 20 words what would you say?
My latest book is called Journey To Landaran: Book One of the Spirit Mage Saga. I’d summarize it as, “Twins Aidah and Tavish discover that their powers will change the fate of nations.”

Do you have plans for a new book? Is this book part of a series?
I’m currently working on Book Two of the Spirit Mage Saga, Fall of the Guardians. The adventures continue for Aidah, a Spirit Talent, and her twin brother Tavish, who is a firestarter or Sun Talent. Their country is at war, and they must learn how to use their powers before the city is overrun.

How do you come up with the Title and Cover Designs for your book/books?Who designed the Cover of your books?
I actually went through a few titles for Journey To Landaran. While I was writing it, I had entitled it “Shadow in the East,” but that didn’t really work since they were headed east to get to their destination. I ran several suggestions through my writing critique group and collectively we agreed on the current title. My next book I also had a couple ideas. My daughter chose the current title—she said it sounded more exciting.
Katt Amaral is the artist for my cover. I came across her work on Deviantart.com and fell instantly in love with her photo manipulations and digital art. I have a background in graphic design, so I did the lettering and other design elements. For the interior map, I used an artist I’d worked with on other projects, Pasunna Zacrifa, who lives in Thailand. He blew me away with his map and was extremely patient when I changed a bunch of names of landmarks!

Do you choose a title first, or write the book then choose the title?
I like having a title while I’m writing, but as I said earlier, the title may change.

How do you come up with characters names and place names in your books?
I keep a notebook for each book that I write, where I can write down things like legends, history, family trees, and yes, names and places. At the back of my notebook for Journey to Landaran are a bunch of names. “Tavish” means “twin” in Irish Gaelic, for example. “Aidah” means “Nobility” in German.

What do you do to unwind and relax? Do you have a hobby?
I read, I watch movies, I volunteer (not really relaxing but I enjoy it). I also like playing video games, like Skyrim or Assassin’s Creed. I dabble in art as well so I’ll sometimes do colored pencil drawings or watercolor. I used to paint in oil but I’d really need a studio for it—it’s messy.

Do you think books transfer to movies well? Which is you favourite/worst  book to movie transfer?
It depends on the book. The only reason Lord of the Rings translated well was due to Peter Jackson’s attention to every detail, because that was a difficult translate on to make. Ender’s Game did a pretty good job. The worst was probably War of the Worlds.

What are you currently reading? Are you enjoying it? What format is it?(ebook, hardback or paperback)
This is a tough question to answer because I’m typically reading several books at once—I like to cycle through them reading a chapter or two at a time. At the moment I’m reading The Shining by Stephen King in preparation for reading Doctor Sleep.( Stephen King’s one of my favorite writers). I’m also reading last year’s Amazon Breakthrough Novel winner, Time Bound.  I’m also starting the second book in the Mortal Instruments series. And then also Kim Harrison’s Dead Witch Walking.

What piece of advice would you give to a new writer?
Two pieces of advice. One, read. I know, it takes time, but the more you read, the more you know what’s out there and what’s been done. You also can learn what you like and don’t like about how other writers form plots, create characters, generate suspense.
Second, find a good writing critique group. When I say “good” I mean one where people are both supportive but also honest in giving you suggestions to improve your writing. I belong to TheNextBestWriter.com and have made a lot of friends there.

The wyrrets squealed and took off away from the nest, abandoning their babies as the shadow gave an ear-splitting shriek, the volume of its voice sending trickles of snow running down the cliff at Aidah’s back. Light returned as the creature crossed the sun and was illuminated in frightening detail, russet feathers and enormous scaled talons. With a rush of wind which drove Tavish and Aidah into the cliff, the giant roc flapped its wings and took off after its prey.
“Tavish, do something! Save them!” Aidah screamed as the giant bird swooped past them after the wyrrets, its beak opened wide. The roc chased them down around the mountain, out of sight.
The wyrrets would hardly make a mouthful, but the enmity between rocs and wyrrets was far greater than a simple need for food. The small creatures were notorious for annoying the huge birds, stealing their nest sites and diving at their young to steal food right out of their mouths.
Aidah glanced at her brother and found him struggling just to hold onto the cliff.. It seemed the wind and falling snow had made him lose his foothold. She hurried to help him to a more secure part of the ledge.
“What a monster!” he gasped once he was steady. “Is it gone?” He clutched at the rocky face of the cliff, hugging it to keep from the edge.
Crouching to keep her center of gravity, Aidah peered over the edge, but the slope of the mountain prevented her from seeing anything but sky and mountain. “Should we continue? I’d feel awful if our actions today killed those poor things. Did we attract the roc?” Her heart pounded against her ribcage and that strange dizziness overcame her again. She heard Tavish muttering to himself, but when she looked up at him his mouth was shut. He was grimacing.
“Damn bird. If it would just fly up here, I’d show it a thing or two. How dare it attack our prey! And if it finds that nest . . .” His eyes widened. “Hurry! We’ve got to get to the nest to protect the babies.” He didn’t say what they both feared; that the parents had already both been swallowed.
Carefully they scaled the cliff leading up to the nest on an outcropping of rock. Tavish, his arm muscles contracting, pulled himself over the top then he helped pull Aidah up alongside him. Together they crept into the enormous nest of thorn brush and thistle, softened with molted roc feathers. The outcropping provided just enough room for the huge nest, undoubtedly stolen from its former occupant. Aidah stepped over a long fir branch which made up the base of the nest, trying to make her way into the center where she heard the frightened mewling of the wyrret cubs.
Just as she spotted the brown-furred little fellows stumbling clumsily over each other, there came again that awful screech from behind. Aidah whirled and screamed at the roc to scare it off.
Her movement was too sudden. The branch she stood on snapped, and she fell back, tumbling down the nest towards the brink of the ledge. Tavish reached out and caught hold of her shirt as her legs slipped over the edge.
“Grab my arm! Pull yourself up,” he commanded as the fabric in his hand began to tear.
Aidah tried to grab for his arm, but her body was turned awkwardly. At least her predicament seemed to have one benefit. The roc, startled by her fall, wheeled away.
She didn’t have time to see if there were any other flying creatures down there, such as a few frightened wyrret parents. The shirt tore. Aidah scrambled to get hold of something, anything,. She felt herself falling, and then Tavish’s fingers clamped hard around her wrist, his short nails pinching into her skin.
“Sis, don’t move; I’m not secure here. Just stay still and let me pull you up.” Aidah looked up at her brother holding her with one hand, trying to get a foothold or any kind of handhold on the cliff to brace himself in order to pull her back up. The fact she was looking up at him alarmed her—she was truly hanging off the cliff, her shoulders rubbing the hard granite of the edge, her lower body dangling.