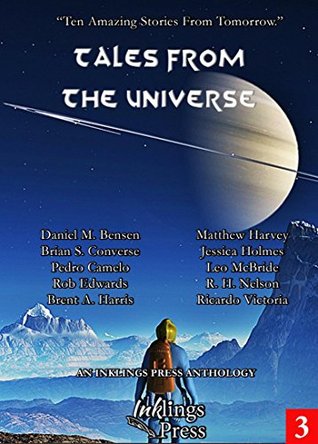 BLURB from Goodreads
Ten new voices in the world of science fiction cast their minds open wide and bring forth visions of tomorrow. Science fiction stories that deal with love, and fear, hope and despair, the ugliness of mankind and its beauty. Tales that reach to the farthest edge of the galaxy, and that face startling futures right here on Earth. These ten stories deal with artificial intelligences, cloning, aliens, war, peace and humanity's place in it all. We give you Tales From The Universe.

MORE INFORMATION
ABOUT THE COLLECTION
(provided by Jessica Holmes)

The Devout Atheist by Daniel M. Bensen (thekingdomsofevil.com)
An archaeological dig goes awry when one of the group chooses to use medicine in favour of the tried-and-tested talismans that keep the others safe from demons.

Upgrade To Murder by Rob Edwards (storycastrob.co.uk)
A bored astronaut decides to educate the AI controlling his station in the ways of murder- with a little help from Agatha Christie.

Suliko by R.H. Nelson
A man clings to the memory of his lover in a world where to be forgotten is to never be resurrected.

Dead In Space by Matthew Harvey (twitter.com/TetsunariHarvey)
An AI aboard a broken down ship awakes when a salvage crew arrive on board. She's dying and in need of rescue- if she can just make them hear her.

The Familiar Road by Pedro Camelo (facebook.com/PedroCameloAuthor)
A man discovers what his wife and his neighbour get up to while he's away each weekend- and that's not the only thing they're keeping from him.

Cosmic Egg by Ricardo Victoria (twitter.com/wingedleo)
A team of astronauts find something impossible on the surface of a neutron star- a temple. Even stranger? What's buried in the heart of the star. It's about to wake up.

Small World by Brian S. Converse (facebook.com/BrianSConverse)
An alien exiled to our world learns of a terrible threat to our existence, and he's the only one who can stop it.

The Ellian Convergence by Brent A. Harris (twitter.com/BrentAHarris1)
Years after the end of humanity, the AI society left behind is under threat from a greater artificial intelligence. There's only one way to save themselves, and that's to save the humans.

Lazarus Soldiers by Leo McBride (facebook.com/leomcbrideauthor)
A squad of cloned soldiers go to investigate a downed colony base, and discover that the very technology they rely on for resurrection and transport was the downfall of the base.

Deep In The Rock by Jessica Holmes (twitter.com/scribblingjess)
A pair of asteroid miners suspect they aren't being told the whole truth about their jobs. They set out to investigate, but will end up wishing they hadn't.

What is your name, where were you born and where do you live now?
My name is Jessica Holmes, and I'm from Lancashire, which is where I am now.

Did you always want to be a writer? If not what did you want to be?
I've flipped back and forth between loads of career ideas, but writer was the one I always came back to. Though if not writing, I'd be doing something in Art and Design, which I was studying at college until health issues forced me to take a step back.

Who is your publisher? or do you self publish?
Tales From The Universe is from Inklings Press.

How long does it usually take you to write a book, from the original idea to finishing writing it?
Well, the one that's just published was a collaborative effort between myself and nine other authors, each contributing a short story. Mine took a couple of weeks.

What can we expect from you in the future? ie More books of the same genre? Books of a different genre?
I personally am working on a fantasy novel about an heiress to a smuggling fleet, and the next anthology from Inklings Press, who published Tales From The Universe, will be on the theme of alternate history!

Do you have plans for a new book? Is this book part of a series?
I'm planning the sequel to the fantasy novel I'm working on, as it's in the late stages of revision.

If you had to choose to be one of your characters in your book/books which would you be? and why?
To be honest I'd be reluctant to enter the world of anything I've written. I have a tendency to do horrible things to my characters. Things don't end well for them.

How long have you been writing?, and who or what inspired you to write?
I've been writing since I could hold a pencil, but it's been a couple of years that I've been taking my projects seriously.

Where do you get your book plot ideas from?What/Who is your inspiration?
They mostly come from daydreams, or when I'm just about to go to sleep. I just have to hope the ideas will still be in my head when I wake up!

Do you have a certain routine you have for writing? ie You listen to music, sit in a certain chair?
I like to put a bit of music on, whatever I'm in the mood for at the time. I have to say that Woodkid's The Golden Age is like WD-40 for the brain.

Do you gift books to readers to do reviews?
I have gifted a few copies of Tales From The Universe in exchange for a a fair review.

Would you ever ask a reviewer to change their review if it was not all positive about your book/books?
No, I think that would be dishonest. I've not been in that position yet though.

How do you come up with the Title and Cover Designs for your book/books?Who designed the Cover of your books?
I was just one of the contributors for Tales From The Universe. The title and cover choice were in the hands of Inklings Press. Ricardo Victoria designed our cover.

How do you come up with characters names and place names in your books?
I normally browse through a name catalogue for an appropriate name based on the character's background, personality, so on and so forth.

Are character names and place names decided after their creation? or do you pick a character/place name and then invent them?
Generally the character comes first, then I pick a fitting name.

Do you decide on character traits (ie shy, quiet, tomboy girl) before writing the whole book or as you go along?
I'll have a vague idea of who they are, and as I write the pieces come together and I learn a lot about them.

How do you market/promote your books?
We had a Facebook launch party on the day of launch, and we've been using social media to spread the word.

Is there a certain Author that influenced you in writing?
I adore Ray Bradbury's short stories, and I think that's had an influence on the sort of story I like to write.

Which format of book do you prefer, ebook, hardback, or paperback?
I'm not fussy, I have an e-reader, but generally I'll buy whatever's cheapest.

Do you think books transfer to movies well? Which is you favourite/worst book to movie transfer?
Some do, some don't. The Golden Compass, based on Northern Lights by Philip Pullman was an adaptation that as a kid I was enormously disappointed with-- they cut off the ending! Though I heard the BBC is working on an adaptation, so I'm looking forward to that. They did a good job with Jonathan Strange and Mr. Norrell.
As for favourite, I'd have to go with Lord Of The Rings. Yes, some things were changed, but on the whole it's a great trilogy.

Do you think ebooks will ever totally replace printed books?
It's hard to say, really. A lot of people are still very keen on printed books. I doubt they'll ever really die out, even when 99% of books are digital, they'll still sell print editions, for collectors perhaps.

Did you read a lot at school and write lots of stories or is being a writer something newer in your life?
I had my nose buried in a book at all times when I was in school. I'd tell stories of my own to anyone who would listen.

Did you have a favourite author as a child?
Easy. J.K. Rowling.

Do you have a treasured book from your childhood? If yes, what is it?
The Harry Potter books sparked my love of reading, as they did for loads of children of my generation (although I was actually a later arrival, only being a baby when the first one was published).

Are there any New Authors you are interested in for us to watch out for? and Why should we watch out for them?
Well, I must draw attention to my fellow Tales From The Universe authors: Daniel M. Bensen, Brian S. Converse, Pedro Camelo, Rob Edwards, Brent A. Harris, Matthew Harvey, Leo McBride, R.H. Nelson and Ricardo Victoria. They wrote a cracking collection of stories which I am proud to be a part of.

What do you think about book trailers?
We had one for Tales From The Universe. Seems only right to use all the resources at our disposal for promotion of the book!

Do you or would you ever use a pen name?
Depends on what I was writing. Not right now, but if for example I got a reputation for writing terrifying horror and wanted to go into children's books, I might consider a pen name then to avoid putting people off.

Where can readers follow you?
The info for the rest of the authors in Tales From The Universe will soon be available at  inklingspress.com
Blog: Not mine personally, but Stephen Hunt from Inklings Press runs alteredinstinct.com, where all news related to anthologies, free short stories (there might be one from me soon!), and author interviews are posted.
Twitter: @scribblingjess


Amazon: This will take you to your local Amazon page for Tales From The Universe: mybook.to/TalesUniverse