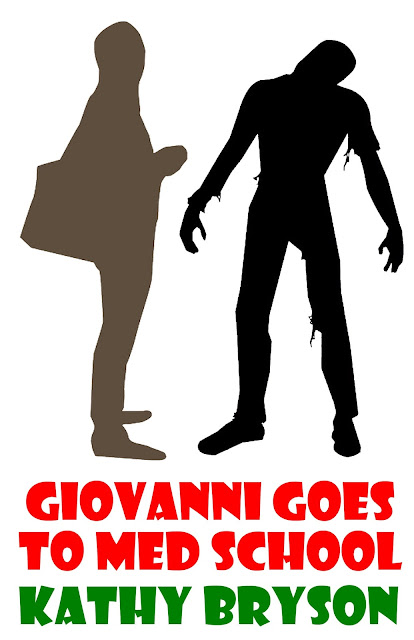 BLURB from Goodreads
You don’t have to be a medical student to know the dead do not get up and walk around. Anyone who’s buried a pet in the backyard knows the dead don’t walk. They don’t even lurch.

The night-shift in the morgue was supposed to be a chance to study in quiet and off-set ridiculous student loans. Giovanni is stunned when his patient sits up and starts scolding. Now he’s got to convince an unbelieving medical community to take action, so he can get back to learning about the dead – not the undead!

EXCERPT
“New, huh?” Fred scrawled something across the bottom of the page and handed it back to Giovanni. “Don’t worry about it. Everybody freaks out at first, but you get used to it.” He waved vaguely at the back wall with its row after row of file drawers that didn’t hold paper. “C’mon, I’ll help you put her away this time.”
More grateful than he could ever express, Giovanni helped Fred maneuver the recalcitrant gurney over to the back wall and nervously unlocked and opened a square metal door. What looked like a file drawer was actually one part of a self-contained refrigeration unit. This was a small morgue according to the manual. Everyone got his or her own drawer, but shared a central cooling and back up system unlike the county facility where everyone shared shelf space in a refrigerated room.
Fred had no nervous qualms and instead had the white cloth whipped off the gurney and the drawer’s metal tray pulled out in one smooth move. “Okay, you lift the feet and I’ll get the head.”
Giovanni looked down and was surprised. The white swathed figure on the gurney looked like a load of laundry more than anything. “It’s so small.”
“Yeah.” Fred carefully angled himself in between the wall and the head of the gurney.  He gently slid both hands under the figure’s shoulders so its head rested on his forearms. “Most of the elderly are by the time they pass. Just wasted away. It’s the fat bastards who die of heart attacks that are a pain. On the count of three, lift.”
Giovanni hurried to slide his hands under the figure’s legs and lifted. The body shifted easily to the sliding tray. Fred stepped back and reaching for the white cloth, began folding it. “Shame really,” he said, regarding the body solemnly and shaking his head. “Mrs. Harris was a real nice lady.”
“Wait? Mrs. Harris?” Giovanni’s glance darted between the still figure and the clipboard of papers he held in one hand. “I know her. She was in the ER this morning.”
Fred nodded. “Regular customer. Guess this was her last trip.” He squinted at Giovanni as he put the folded cloth down. “You okay, son?”
“Yeah, yeah, of course,’ Giovanni pulled himself together. “I just thought she’d made it. She had a dislocated elbow.” His mind skittered away from the memory of Mrs. Harris not breathing as she lay in the ER exam room.
“Well, it happens.” Fred eyed him from underneath lowered brows, and then shrugged. Apparently he wasn’t going to concern himself any further as he proceeded to wrestle and curse his gurney back into the freight elevator. He didn’t even look back or wave as he pressed the button for an upper floor.
Giovanni did wave, but absently, and hurried back to the morgue as soon as the freight elevator doors closed. He flipped urgently through the paperwork on his clipboard, but there were no patient records included, just blank forms waiting for the morgue manager's signature to ensure the right body was handed off to the right funeral home. At her age and in her physical condition, Mrs. Harris wouldn’t merit any attention from the medical examiner. She was simply an old lady who had passed as everyone did eventually.
Giovanni sighed and put down the paperwork. He didn’t see where he could do anything more for Mrs. Harris and the hope that maybe he’d done enough started to creep up on him. After all, the other, fully qualified doctors had administered the actual anesthetic. He was probably just feeling indoctrinated guilt from being raised in a large Catholic, Italian family.
Dimly in the background, he heard a mournful howl. Rufus, he thought with an inward eye roll and it didn’t even occur to him how eerily appropriate it was for the dog to howl just then. Instead, he reached for a pen and the toe tag on the bundle in front of him, determined to ensure that Mrs. Harris reached her final rest without mistake.
The toe tag pulled away. Frowning, Giovanni reached again. The toe tag slid away from him and he watched horrified as the swathed figure writhed, then sat up. From somewhere behind him, he could hear frantic barking and a high-pitched wail. When he gasped for breath, he realized the wail came from him even as the cocooned corpse bent forward and mumbled, “Sonny, you scream like a girl.” 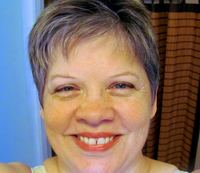 Kathy Bryson knew she wanted to be a writer when she finished reading through her school and local children’s libraries. She honed her writing skills on marketing brochures, websites, and several unfinished manuscripts before going into teaching and finishing award-winning books with all the stuff she enjoys most – from coffee to love to Shakespeare! Kathy lives in Florida where she caters to the whims of spoiled cats and wonders what possessed her to put in 75 feet of flower beds.