REVIEW - THINGS I'VE SAID TO MY CHILDREN BY NATHAN RIPPERGER 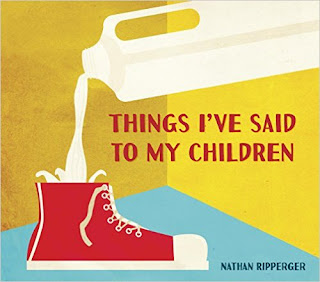 BLURB from Goodreads
As the father of five boys (all under age 10), graphic designer Nathan Ripperger has found himself saying some rather funny, absurd, and downright bizarre things to his children, from "Stop riding that penguin, we're leaving" to "I am NOT talking to you until you are wearing underwear." He created poster-like images for each and posted them online. The response from other parents was overwhelming. With Things I've Said to My Children, Ripperger has assembled around 80 of the funniest, weirdest, and most amusing sayings and paired them with full-color, designed images that bring these outrageously hysterical quotes to life. Covering the essential parenting topics like food, animals, don'ts, and of course, bodily functions, Things I've Said to My Children is a light-hearted illustrated reminder of the shared absurdity of parenthood. Especially for those parents who've ever found themselves uttering some variation of the line, "Please don't eat the goldfish crackers you've put in your butt."

INITIAL THOUGHTS
I wasn’t totally sure what to expect from this book, I think I thought it was perhaps going to be a funny collection of things the everyday parent say’s to his or her children on a normal daily basis. So I was anticipating a possibly “laugh out loud” short book.

REVIEW
I saw this one on Netgalley under the genre of comedy/parenting and decided to request it. My request was then accepted and I was given an e-copy of the book free in exchange for my honest review.
The cover features a sports shoe with milk being poured into it! which is an obvious hint at the comedy element of the book.
Would the cover of this book make me pick it up from a bookstore shelf? If I was looking for a fun gift type present for someone, then yes.
Nathan Ripperger begins the book by describing children as human tornadoes of irrationality and ridiculousness. He goes on to say that our job as parents is to cope with all that irrationality and ridiculousness. As a parent Nathan found him saying things to his own children that he thought on one else had ever said, so he decided to write them all down and “Thing’s I’ve Said To My Children” came about.
I think I can agree with his statement and thoughts that we all want our children to be “normal” whatever that may be. No matter how we try to smile and stay calm we do not want to be the parent of the child at the supermarket who is dancing in the aisle with a loaf of bread whilst licking the shopping trolley. As Nathan say’s in this book and I reckon if truly honest most parents, even with well behaved children have to admit that at some point they have felt like they are always saying “Don’t”, “Stop” and “No” to their children. Nathan admits to feeling like he ia regularly saying those things as he has five children, and one of them is a baby.

Below are some of the phrases Nathan has chosen to share with us in this book.
“You can’t dance with a fork in your hand”
“Don’t bite the lampshade”
"Don’t put gravel in your underwear”
“T-Rexes don’t eat crackers”
“Stop eating cake out of the garbage, You already brushed your teeth!”
“Stop slapping the cheese”
“Stop rubbing watermelon on your arm!”
“We do not poop in books”
“No! We do not put pop-tarts in electrical outlets”

The book was a very quick “read”.  If you can really refer to it as a read. In my opinion this is more of a collection of the things we say when children do odd, or weird things that we feel are inappropriate. This collection of “Thing’s we say. . .” has illustrations to help the reader further visualise a child carrying out the tasks/things we are telling them not to. I think this book would probably make a small amusing small token gift type book for those who have just had children, or perhaps as a gift for Grandparents, Babysitters. A couple who has just had children  or even Primary School Teachers.
Have I said any of the things from the book to my daughter? (who is actually 19years old now). Being absolutely truthful no, the nearest one I have gotten to saying was something like “Don’t wave your fork around”.
I actually thought the book would contain thing’s more like “When you fall off that wall and break your leg, don’t come running to me” having said that I could see the funniness in some of the quotes.
So did I enjoy the book? It was okay, being totally honest I have read similar ones that were funnier and contained more too.
Would I recommend the book? As a small token gift to a “new parent”, or for a primary school teacher, yes, I think it could work.
Would I want to read another book like this one? Yes, I love funny quote style books, especially if it’s things young children have said or done.
Would I want to read other books by this author? I think if it was this style of book, it would have to contain more relevant and funnier quotes for me to personally buy a copy for myself to read.